Yet another Z axis problem

The problem: Z axis only moves (in either direction) when I support the router.

*Z axis firmware is enabled
*everything else works as it should

What I have tried:

1.) silicone spray
2.) bungee cords
3.) separating the router power cord from the z axis power cable
4.) looping the power cord so it doesn’t pull on the router

I’m wondering if i need to somehow remove the orange “lock thingy” on the the Z axis screw on the router base.

You are correct I am using the recommended Ridgid router

is the router base clamp loose enough?
I just loosened it further that helped a little but have to support it
is there any corrosion on the router or in the base?
No the router is new it’s all shiny in there
does the motor sound like it is trying to move when you are not supporting the router?
Yes it is trying and it does move when i assist it manually
are you using a bungee?
Yes i have a bungee on it
does the axis move as expected when the router is not in the base?
it moves with the grace of a Gazelle (yes) 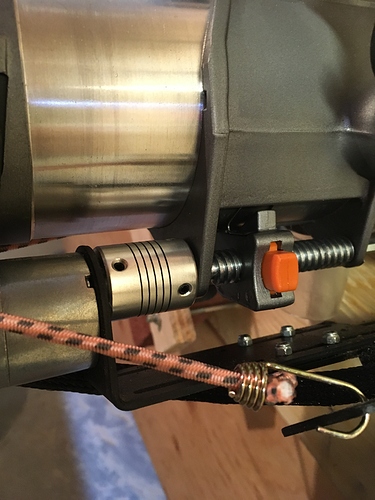 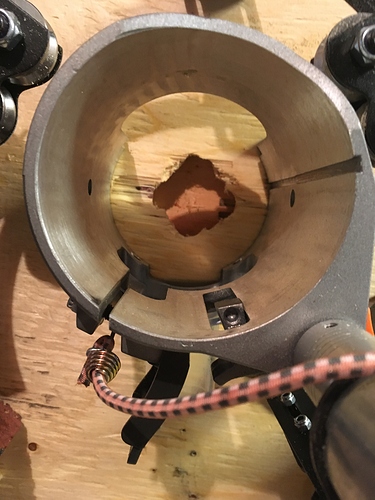 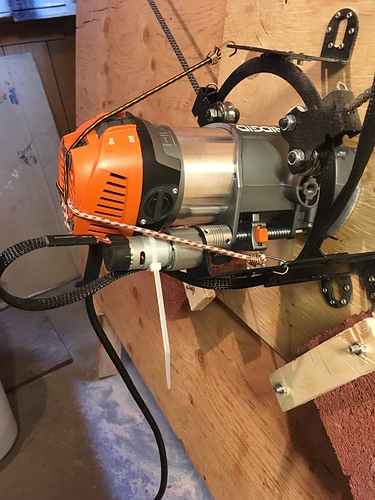 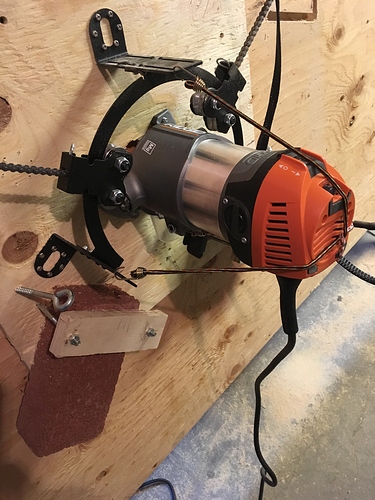 My first guess is that the bungee is too strong and is possibly torquing the router to the side and binding it up enough to cause it to not move (and possibly make the orange tab to pop out of the slot on the router).

When you say you support the router, do you mean that you are helping guide it out? (this is what I am guessing would alleviate the binding)
Does the z-axis plunge but not raise?

Is your router clipped into the engagement thingy?

My first guess is that the bungee is too strong and is possibly torquing the router to the side and binding it up enough to cause it to not move (and possibly make the orange tab to pop out of the slot on the router).
Ok I re-configured the bungee’s to put less pressure and I made sure the pressure is pulling the router up a bit instead of down. here is what it looks like now 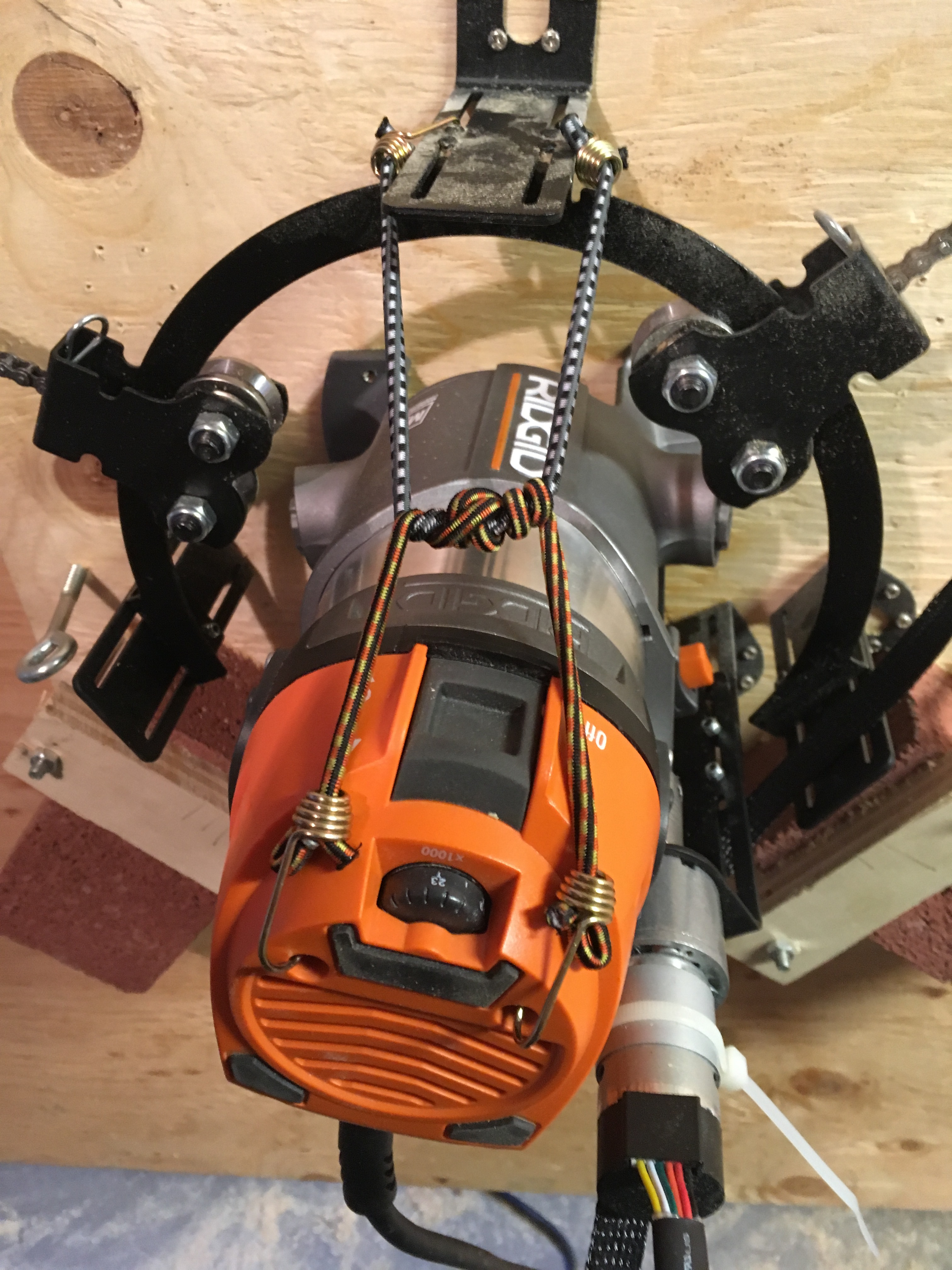 When you say you support the router, do you mean that you are helping guide it out? (this is what I am guessing would alleviate the binding)
Yes, i just try and keep it centered and not pinching anywhere

Does the z-axis plunge but not raise?
It does both, but it’s harder to get it to raise smoothly. However it binds in both directions

Ok I did some closer looking at the groove inside the base and I think I see the problem. there are small gouges that that little nub rides in. 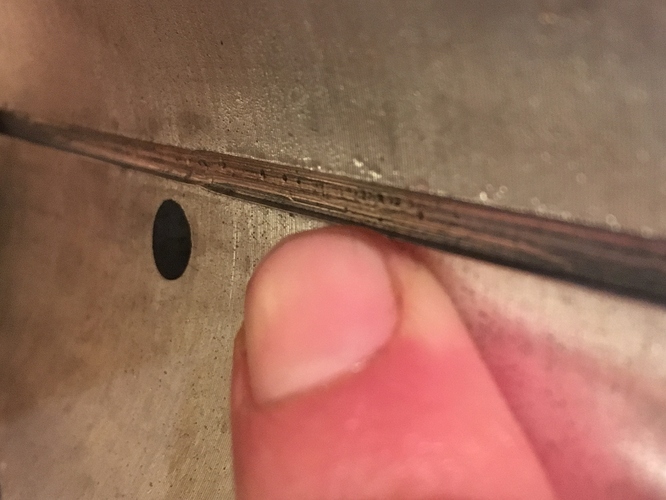 I really think this is it but I’m not sure how to solve it. lubricant doesn’t seem to work. I guess I could file it and see where that gets me

To check this, remove the bungee, disengage the engagement thingy and move the router up and down by hand. I should slide very easily. If it doesn’t than the router binds in the base and likely it is related to the spots you are pointing out.

Just made a short video showing the problem as it happens.

FWIW, and possibly not related to your problem, I use a similar bungee and I place the hooks in the bolt holes where the handles use to be. It works well and is more balanced potentially than using the ring.

Did you check that both hex screws were tightened at the collet/zmotor shaft. In the video is sounds like something is slipping.

Take the z axis motor off and check if you can turn the collet by hand to move the router up and down. If you can, it has to be coming from the z axis. If you cant, I would take or send the router back to get a new one. Also, the router seems almost too loose in the base to me.

the router seems almost too loose in the base to me

I think that this may be contributing to the binding

Good thinking! Also, make sure that the set screws are located on the flats of the shafts, and not on the rounded part.

I believe @clintloggins has a great point. that’s the first thing I thought of and as watching your video it seems to confirm it. I believe you need to tighten your set screws on the adapter that is on the motor because it stops moving when you can still hear the motor moving.

ALRIGHT!! So it works now!!

@clintloggins pretty much nailed it. Here’s what it looked like: 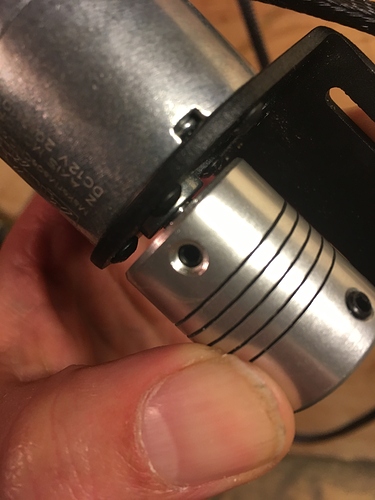 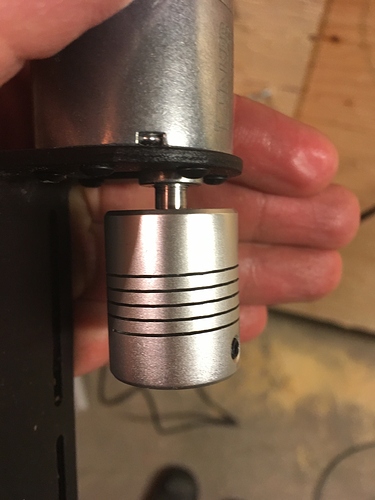 Here’s a quick video of it working.

Thanks again for helping me think through the problem! Hopefully this thread will help more people.

I’m so glad everything worked out! Happy cutting!!

Wow. Hadn’t even noticed that it had a round portion. Thanks for pointing that out!

Finally it worked out… Now enjoy your cuttings.

Thanks! It helped me over a year later!