Well, my box arrived, so its time to quit procrastinating and start building. I’ve been lurking on the forums here since I ordered my kit in March, but aside from acquiring a windows tablet and downloading ground control(1.16), I haven’t actually done anything…

Frame:
Cut 1/2" plywood into 4" strips.
Slot it with a 1/2" dado on the radial arm saw at a 30deg angle, every two feet.
Assemble it ‘eggcrate style’ into diamonds with 60deg and 120deg angles.
Set up edge guide and route 1/2" slots across the joints, 3/4" deep (both sides)
Fill those slots with 3/4" x 1/2" battens. You now have a rigid frame with triangular honeycomb.
Legs, feet, and support for unistrut top bar are trivial at this point…

Sled:
I plan on sourcing a sheet of HDPE and laminating it to plywood for the base. This should reduce friction…
I have a Jenson circle-cutting jig for my router, so I’ll use it to cut the sled properly the first time.

Sled supports:
One of the limits to accuracy seems to be chain sag. so instead of using the chain to support the sled directly, I plan on getting some lightweight Stainless aircraft cable (wire rope) and using it to support the sled. At the top corners where the motors usually go, will be simple pulleys. The cable to chain coupling will be just past the pulley when the sled is at the opposite bottom corner of the working area. The motor and sprocket drive will be directly below the pulley, so that when the chain is at full extension it will be hanging vertically, so that length changes due to sag won’t be an issue. The chain will wrap 180degrees around the sprocket, and the slack will be taken up by bungees going straight up, so with that much sprocket engagement, skip shouldn’t be an issue.
I may have to build the frame a bit taller, as I calculate a maximum 108" travel for the chain to move the sled from near corner to far corner, so that is the minimum dimension of chain ‘in the clear’ between the motor sprocket and the cable pulley.

OK, these ideas are just off the top of my head. Please evaluate critically.

you are putting a lot of effort into making a super rigid frame to hold the
workpiece, but that’s not a very significant factor in accuracy

chain sag is compensated for in the calculations, the aircraft cable will sag as
well (although possibly less)

could you create a diagram of what you are thinking of for your cable/chain
routing?

Here’s a quick sketch. Blue is lightweight cable, Green is bungee, and red is chain. 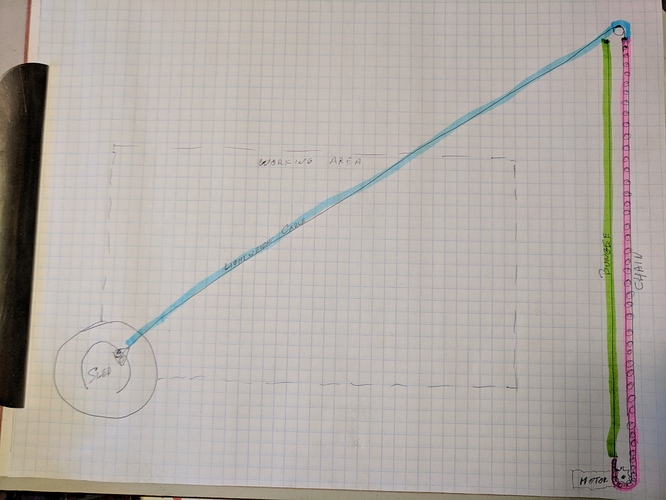 What a cool idea! I don’t think I’ve seen that proposed before

Interesting concept. The bungee would have to be rethought since when you need the most strength holding the most chain your bungee is the weakest. Also, in the configuration you have drawn in the far corner, there is much less weight on that line than there would be on the other line not drawn. Seems like that might introduce more sag both in the vertical chain and the wire. Building it you would also have to be concerned about having two things perfectly horizontally parallel: the motors and the top pulleys. Unless this can be accounted for in software.

Just throwing out my first thoughts…

…or instead of bungee, use more cable, looped over a pulley at the top to a counterweight hanging behind the frame. That would provide a constant tension on the slack end of the chain.

note that a standard door is only 80" tall, so to have 108"+ of chain you are going to need to double it up, and that means that you will need to figure out what happens with the slack as well (as the bungee or other cord will not run over a sprocket.

you are also adding a lot more material here, all of which can vary in size, and can sag front to back.

chain sag is pretty easy to compute, and you aren’t eliminating sag, you are only reducing it to some other (and possibly more complicated) formula, which still needs to be computed

you are also putting the motors much more in the path of the sawdust.

You could, with some clever extra pulleys put the chains diagonally across the back, that way you should never have to sacrifice cutting area. As always, here counterweights also seem like a better idea then bungees.

But as david said, i thought chain sag was already handled. This is a cool solution, but does it solve a problem?

Big thumbs up on the sled. Some 3/16" cutting boards might be a cheap source of HDPE to laminate, or Starboard if you want to make the whole sled base out of HDPE.

Cable to the sled doesn’t seem to solve a problem.

The frame idea could eliminate the need for a spoilboard. You need to deal with the angle that Maslow must sit at. What was your plan there?
As I see it your choices are

With your frame structure at non right angles, legs, feet, and support for unistrut top bar are NOT trivial and introduce additional points of potential error. The frame you describe will greatly increase stiffness against twisting and bending, but those are only problems at the top bar with current designs as I understand it. Your design does not address top bar stiffness that I can see. Your frame is not rigid against compression/expansion in the x and y directions. It wants to fold like this tool. You could add gussets, but that would still not make it as rigid against compression/expansion as a full sheet spoilboard.

Perhaps vertical elements with diagonal cross bracing would be easier? Despite some problems, I think some version of your design could work out well.

Actually, no. The final step cuts dadoes horizontally across all the joints, and inserts 1/2"x3/4" battens in them, converting the rhomboids into triangles and making the structure stiffer.

Yes, all I have described here is essentially a rigid working surface, with a triangular honeycomb structure giving rigidity and plenty of opportunities to clamp the project stock down, 8 feet wide x 6.75 feet high. When I insert the horizontal battens, I will make them 9" longer on both ends, so that they will support ‘side wings’ to support the sled at the extremes of the working area. The trivial part is the support legs, which will probably be 2x4s like the default frame design. Or I was thinking I might hang the whole thing on the wall, so all I’d need is a couple of short 2x4s to kick it out at the bottom when I’m ready to cut. I will also have to extend the top a bit, since I want the top beam to be more than 15" above the working area. I may make my top beam as another plywood truss structure so that I can put my pulleys (or motors, since the chain weight doesn’t seem to be the issue I thought it was) at 22" above and 12’ wide. I’ll probably build this truss as two 6’ x 8" trusses, then use carriage bolts and nuts to attach them to my honeycomb frame and each other, for easy disassembly into a more transportable size.

As for the 'Wings", how wide do they really need to be? The center of gravity of the sled is somewhat below the cutting bit itself, but certainly not all the way to the edge. The bottom wing only needs to extend past the CG of the sled. If the sled is properly balanced (Hangs straight with base plumb and bit horizontal when hanging from chains in free space), it won’t tip until the CG of the sled passes the edge of the wing. The bottom wing probably needs to be wider than the side wings, and a top wing may not be necessary at all.

Actually, no. The final step cuts dadoes horizontally across all the joints, and inserts 1/2"x3/4" battens in them, converting the rhomboids into triangles and making the structure stiffer.

Yes, I missed that. I thought you were only talking about a single batten at the bottom edge as a workpiece support.

The open spaces in your design got me thinking this was possible as the space is required to place the clamps.

Hey @Richard_Green, I had thought of something very similar to this. However when I had the idea, I thought about placing the chain and cable horizontally along the top bar. When I had the idea, it was a solution to the whole top-beam, slack chain, bungee issue. Nonetheless, putting this chain mechanism across the top beam would result in a more compact solution. There would be no need for a bungee because the cable could wrap back around and attach to the chain.

I was going to set the wings 1.5 inches proud of the support frame, as that is the max thickness I expect to work with. When I cut thinner material, I’ll shim it out to that level. That’s easier than moving and realigning the motor/gearboxes.

another thing with wire rope, it tends to develop a ‘memory’ which will make it non-straight when under low tension. That’s far less predictable than chain sag.

the reason for a spoilboard is so that when you cut through your workpiece, you are cutting something that’s easier to replace than your frame, @bee has shown cutting on a normal 2x4 frame with no spoilboard.

Even lighter than wire rope, how about Kevlar:

1mm diameter, plenty of strength, no stretch, and no memory problems if I let it sit a week wrapped around a pulley.

Since I’ll be shimming most workpieces out from the frame, cutting without a spoilboard won’t be a problem. When I’m cutting thick stock, I expect it’ll be decorative engraving, signs, like the map project on the CG, so no full-depth cuts. I’ll consider the shims expendable.

are you sure that cord has no stretch to it? even wire rope stretches a little
bit.

unless the chains are vertical, they are going to sag, so running them
diagonally will bring back the problem you are trying to eliminate
k