$4 with a custom chip produced for the Pi foundation (note, does NOT run Linux, but micropython is an option)

but the PIO will make for super accurate encoder inputs (and if, needed, stepper pulse generation) and the PWM for clean outputs

oh yes, programming is plug into your computer via usb and it looks like a drive, copy your firmware image to it, no special programming software needed

I just saw that too, wonder if the PIO processors would be a great fit for Maslow motors and encoders? Just speculation, because the articles were mostly puff pieces without any serious detail. Have to wonder if they pass the master card test yet (whip out your MC and buy some).

While it’s dual core there doesn’t seem to be a good way to use the second core (again, puffery) yet. It does seem intriguing to run the usb interface and planner etc. on one processor, motor control/encoder feedback on the second and (maybe) the PIOs. Have to wonder how the PIO compares to a BBB’s PRUs.

Seems like a good fit for something like the Nano style CNC boards (or Bart’s super board) where it would plug into a baseboard with the motor interfaces and IO, Add an RPi to run web control and talk to the world, one box standard interface. Wonder if it has enough advantage over Bart’s Board to be worthwhile.

And wonder why I’m typing wonder so often. This is another board I really wish I could have gotten back when I was spending long nights with 68K VME boards or before those 10ns cycle time AMD 2900 bit slice boards with a whopping 4K of 48 bit wide microinstruction space, in refrigerator sized boxes selling for several hundred grand (US currency unit worth about 2 Maslows).

each PIO processor can run 4 state machines at once, they look pretty similar to the BBB PRUs (they are able to run a full VGA or HDMI output in them apparently)

for the maslow, I would see three of the state machines used to read the encoders and maintain a position count. the PWM outputs look very simple and powerful so I don’t think there is any help that would be needed there.

One thing I didn’t notice initially. This isn’t just the Pi foundation releasing a board. It’s a custom chip produced by the Pi foundation and sold to others. Adafruit, Sparkfun, and Arduino all have multiple boards designed, with some of them available now as well.

Saw that, they’re all quite a bit more than $4US each.

True, the Pi Pico is a pretty minimalist board, a good buck/boost converter, a
LED and not much else.

fromwhat I’ve seen, these are available in quantity.

These look pretty cheap to me… just have to go to the store to get them. 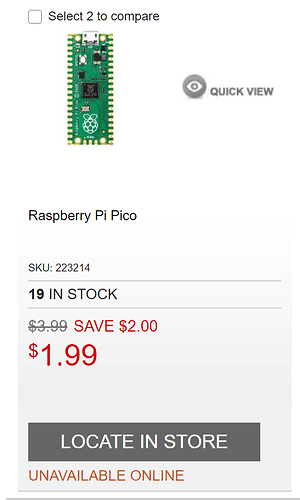 My first trip to the store and they were out of stock, but new stock came in. 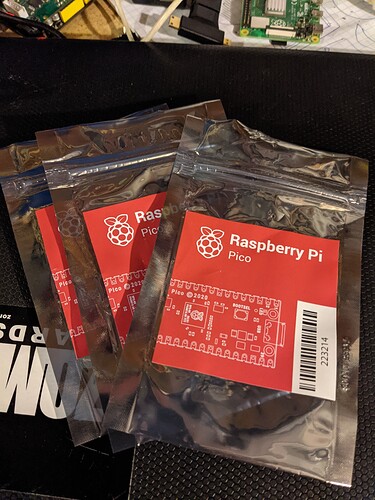