Saw the Video of your development…Thanks for working on it. Am I missing something though, when I look at the picture/video, it seems that the chains still do not intersect at the center, is the round plastic ridge at the top not concentric with the center? Is there an off-set programmed in, or is it just a optical problem with the placement of the camera.

There has been so much work done that it’s hard to know which video you are talking about. If you can point us at it, we can explain.

The chains will never actually intersect at the cutter: but that’s not important. What’s important is that the chain’s vectors cross at the bit. That’s what the ring (and linkages) accomplish. But the chains themselves will never reach the bit.

there was a newsletter from the factory about an added ring design I can not find it now. searching newsletter does not bring it up.

EDIT: I should clarify my earlier statement too… There has not yet been an effort to create a method for connecting the chains at the cutter. There are arguably some advantages (primarily on the topic of accuracy) to having as direct a connection as possible to the cutter itself. I can see this being accomplished with a pair of bearing blocks that surround the cutter above the flutes to which the chains attach.

There are numerous other issues this brings: how to handle Z axis? Could the cutter support the weight of the remaining mechanism (motor, etc) What about the center of gravity… yadda yadda yadda.

I’d love to see it done, honestly, just as an engineering exercise but on a list of “what could be improved about Maslow” I don’t think that particular sticky bit is near the top.

@TheRiflesSpiral is exactly right (If I am understanding the question correctly). The chains do not actually touch, but because they ride along a ring which is concentric with the router bit the ends of the chain are always a fixed distance away from and pointing towards the router bit which has the same effect mathematically as if they were meeting at the router bit itself.

Could be an illusion due to parallax? Bar did describe the ring as centered on the bit…

He also said it was a rough prototype, and perhaps as long as the chain vectors intersect at the same place through the range of movement it may not make a difference. But those were the issues I was questioning, and it sure looks off center to me.

It really does look off center. I think it’s a parallax trick of the eye just like at @blurfl guessed. I tried to retake the picture to see why and moving the camera very slightly to either side made it look off one way or the other.

Here’s one from the side 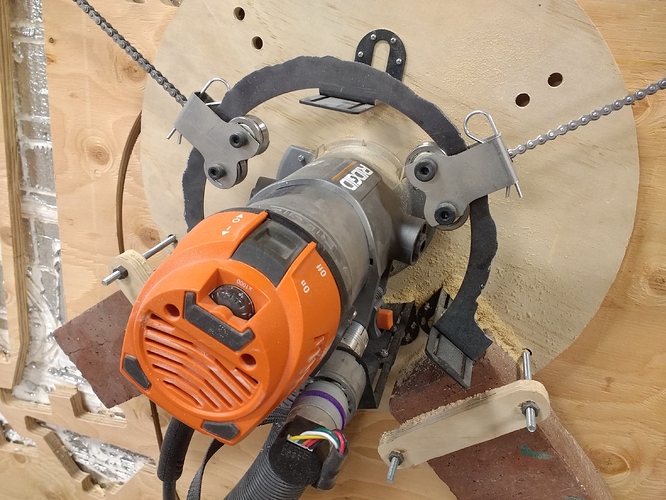 so the chain vectors do intersect the center of the bit??? and the accuracy and calibration routines wil lgive us mathematically theoretical ±.000 …or there are still issues?

so the chain vectors do intersect the center of the bit??? and the accuracy and calibration routines wil lgive us mathematically theoretical ±.000 …or there are still issues?

There is still chain sag, frame stiffness, and other issues. Calibration also doesn’t get us to ±0.000 (I think the current routine considers it ‘good enough’ when the square gets to ± 0.5mm, and any routine is limited by the accuracy of your measurement)

But things are getting much better, with a good frame we think we are in the ±1mm range and working to test that out.

So… When is v2 going to be available for sale? And how much do you think it will cost?

I got the new ring shape back from the laser shop yesterday and I’ll be testing it today. We’ll have them for sale as soon as I feel good about the whole thing. 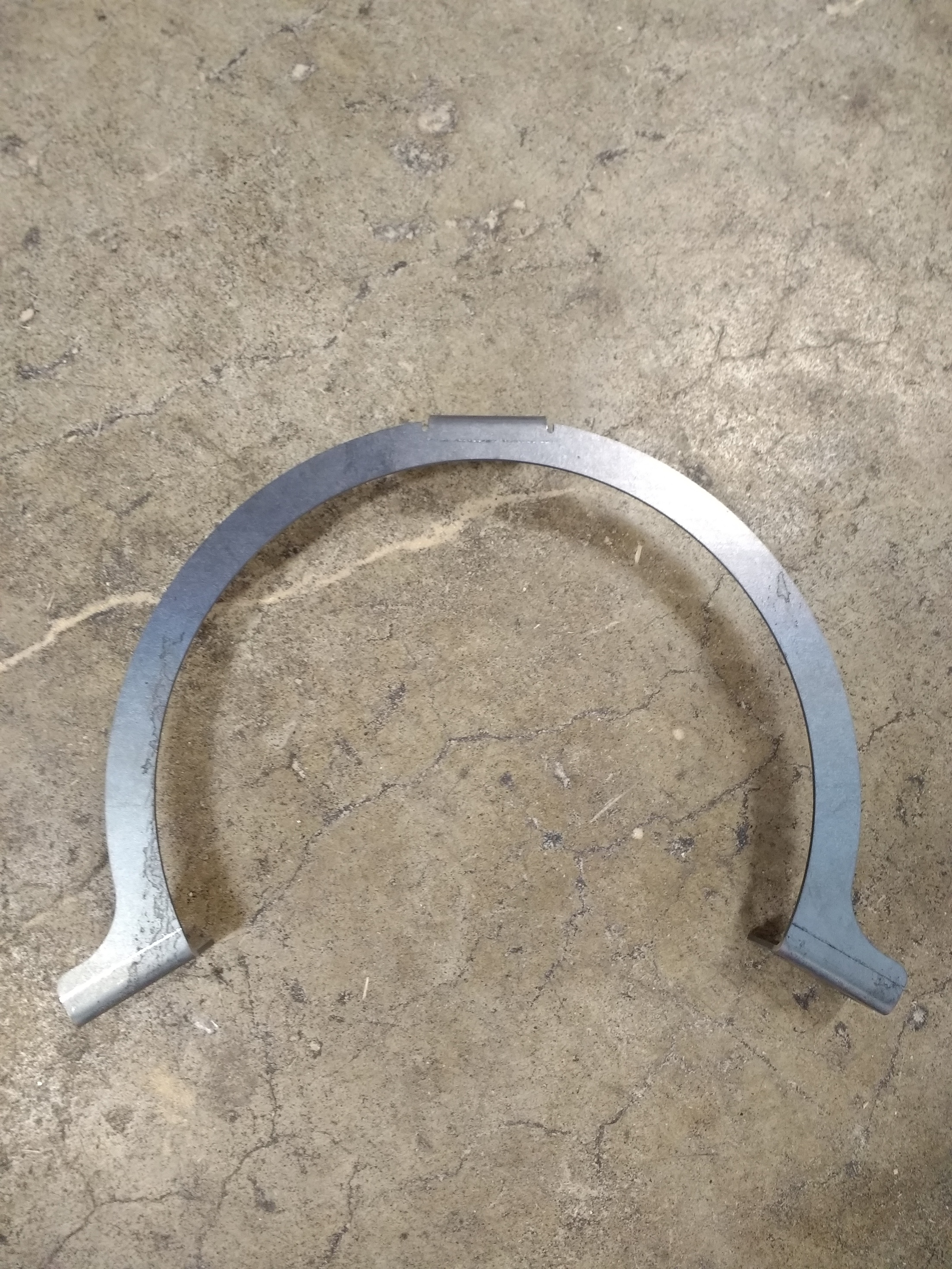 We’ll try to sell them pretty much at cost which I think will be in the $30-$40 but that’s going to depend a lot on if we can find good bearings cheap because we need four of them.

I’m thinking it would be good to do a small beta batch through the forums to get feedback. Would people be interested in being part of a beta group?

my guess is that the next batch will have any modifications. I doubt that the
prices will change much

I think we need to get a few people to try all three versions (ring, 45 linkage, and top linkage) and comment on any differences they see between them

Here’s everything all hooked up: 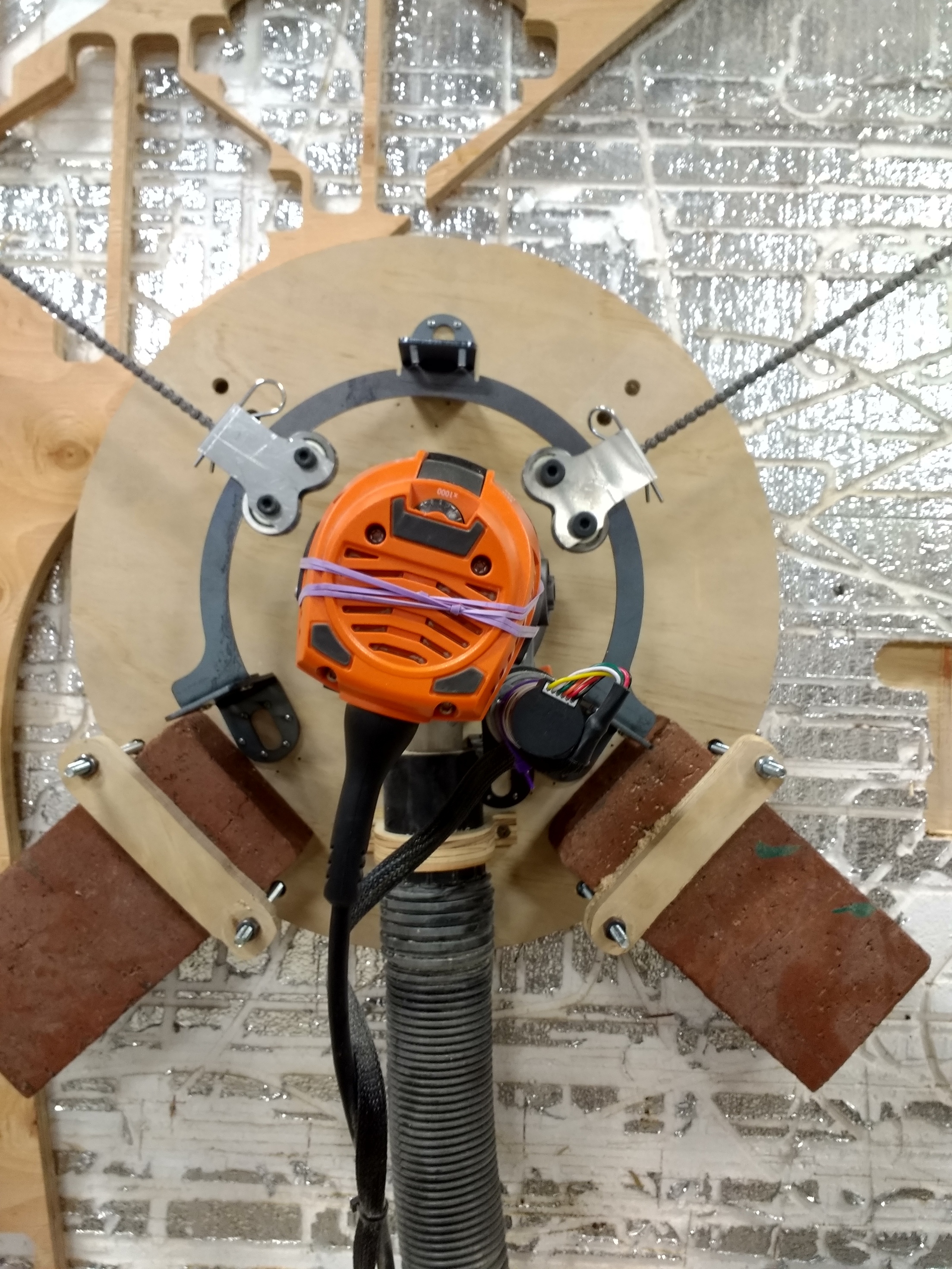 @bar count me in on beta if you can!!