I love routers. I have many routers. I may love routers enough that I have a problem. I definitely forsee me having more in the future, having a problem, and not caring. Surprisingly, though, I have never owned a plunge router. I do want one but I’m not familiar enough with its operation to know if what I am proposing is feasible.
Proposition: use some sort of a screw or threaded rod at the top of a plunge router that is attached to the z axis motor. This way it could compress the spring mechanism on the plunge router when lowering the z axis and release it as it is raising the z-axis. The screw could be placed in a bracket just above the plunge router mechanism.
Also, on a side note since I am in the no judgment category, does anybody have any ideas of how we can use the waste plywood and other materials that are riddled with random shapes? for instance I have thought about the middle board when constructing a door where you will never see the holes. Or given the proper integrity, used as a subfloor when other wood flooring will be covering it. I would like to have a place to upcycle this material as it builds up. Thoughts on either or both subjects welcomed!

I believe there have been some plunge router mods done. Here is one thread that discusses a little bit about plunge vs fixed routers (found with “plunge” search term):

Hi, I experimented with something that might be similar to what you are thinking - it takes a plunge router base, and adds a threaded rod in place of the depth measurement stick to control the height. It works on the bench, but not yet tested on a Maslow.

VERY SIMILAR to what I was thinking! I had hoped that the motor could nest next to it like that but I figured balance might be an issue. … remember I don’t have a plunge mech (yet). 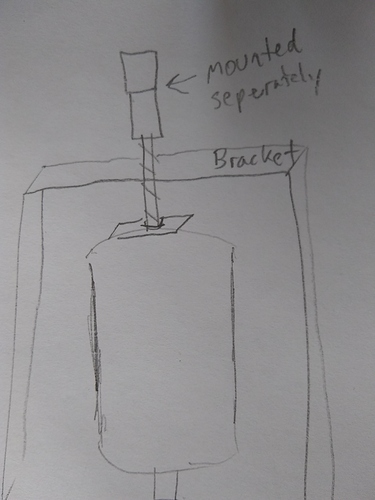 IMG_20190209_1041578382448×3264 1.12 MB
This may illustrate my idea but if yours works without binding or other issues it would be much better!
Amending my crude drawing: motor would be mounted on the bracket in this concept and separately from spindle movement.
Don’t you think this could have less backlash with the tension? This is the reason many people strap a bungy over their router. Thoughts (anyone

From my tests, there is plenty of tension (and I guess you can pick the part of the plunge you are operating in if you want more / less).

I have been using a Makita Plunge router with a Z axis with very good results.
Set-up:
I added a metal base to the moving or plunging part of the router.
A spark plug wrench is attached to the motor and turns the 10MM bolt up/down. 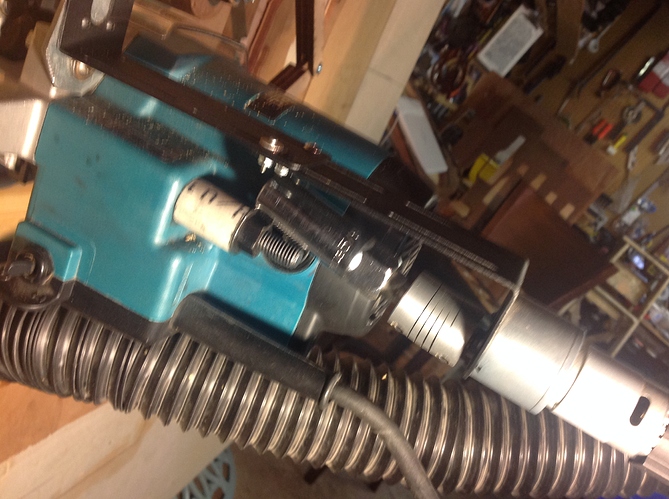 Is the sparkplug wrench off of the bolt in the picture or am I misinterpreting?

Yes the spark plug wrench is off the nut to show the assembly.
I used a steel 10mm nut. The nut was shaved on each side to fit the wrench.

The z-axis pitch (the number of MM moved per rotation of the z-axis) is set to 1.14. It takes more time for the z-axis to position itself because of the thread. The normal setting is 3.15.

The metal ring that comes with the kit does not have enough room. I used the wooden triangulation kit.

There is a piece in between the wrench (square end) and the z-axis shaft coupler(round end) that I filed from an old plumbing piece I had in my shop.

Here is an assembled pic: 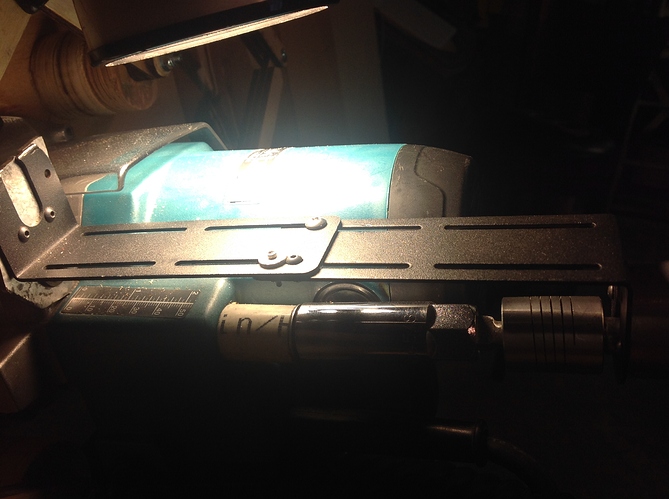 One more thing:
There are two long springs that force the plunge router to return to its original place. The
spring on the other side has to be removed to allow the router to move up and down the shaft more freely.

is your Makita roouter still working well? Seems like if only one spring was in, then the router might have a tendency to get cockeyed due to different loads on the left vs right? trying to find a cheaper plunge router that can be modified.

in general you want to work from fixed base routers that have a depth
adjustment, not a plunge router.

a plunge router has a spring forcing it away from the material to be cut and no
mechanism to push down towards it.

a fixed base router tends to have a fine adjustment that can be motorized.

Seems like many people use the Bosch 1200/1400 plunge router (only available in Europe) and I never hear complaints about the z axis poping loose or being inaccurate. the Makita above seems to work well too, but is over $200 USD

This is because they have two spring loaded plunge rods which are superior mechanically to the loose router base method used with the original kit. Spring loaded also means no bungee is required to fight backlash because the spring is essentially the same thing.

only downside is hacking them seems more involved, but all the routers need to be hacked up anyways IMHO. other downside is collecting dust from a plunge router is potentially harder. 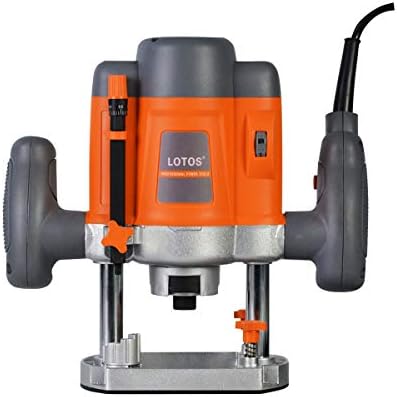 I will get router above to test, hopefully it can be hacked in a similar way as the Bosch is hacked. Amazon also sells same router under the brand name WEN, which seems to be a budget tool brand. I got the 4 year warranty for $4 just in case.

are you sure they are using the bosch with the plunge router base not the fixed
router base?


it has the handles hacked off by users and has it’s own z motor mod in community garden and it’s about $100 in Europe, all around better and cheaper then ridigid r22002 I think.

the Blue bosh router with a fixed base available in the usa has a pitch of about 1.5mm so it is even worse than the stock 3.17mm ridged router pitch.