Hey everyone,
First post here so be gentle.
I picked up a router the other day as it looked like it would work but on closer inspection, I’m not sure.
It has a threaded rod to adjust height but the rod is captive. To adjust the height there is a nob that screws up and down.
I am thinking that I could make a long brass threaded sleeve that the motor attaches on one end and screws onto the rod on the other. This would then drive the router up and down as needed. First pic shows the nob. Second shows the body locked down and the nob screwed off.
Thought I would ask before I void my warranty… 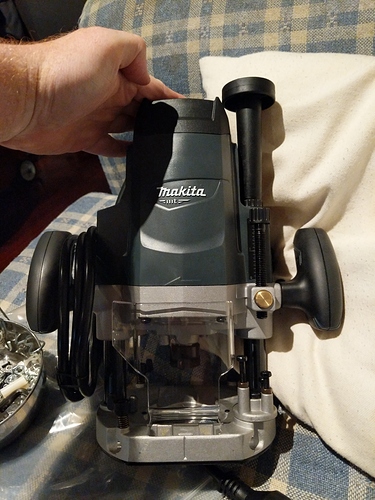 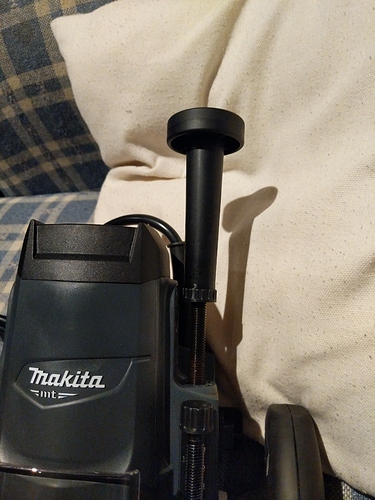 Welcome to the forums, Taehendesune!

Looks like you have a plunge router, which is typically a little harder to convert. The advantage of a plunge router is that there is already a built-in z-axis slide. The disadvantages are 1) often the length of travel is pretty small, which may or may not be a problem depending on what you want to cut, and 2) plunge routers usually rely on downward pressure by the user to go down, which makes it much harder to use a lead screw to pull the bit down.

Can you make it go down by turning the big knob sticking out of the top?

What’s the model number? Once you determine how easy/hard it would be to use this router (don’t worry, we’ll help), we will want to capture this knowledge for others’ benefit.

Hi jwolters,
Thanks for your reply.
Yes, if you turn the knob a threaded nut at the end of the knob moves Down and lowers the router.

The model is Makita m3600, some have the knob and some don’t though.
If you hadn’t guessed, yes, I’m another Aussie having router issues.
https://www.manualslib.com/manual/1365679/Makita-M3600.html?page=5#manual

Ok, so I made up a little brass piece. It has an 11 mm hole in it on one end and an m10 thread on the other.
Need to make a plug up that fits the 11mm hole and has a hole in it to attach to the motor still. I’m new to lathing so I couldn’t work out a way to have a large hole in between two small holes at this smaller of a size… Boring bar maybe? 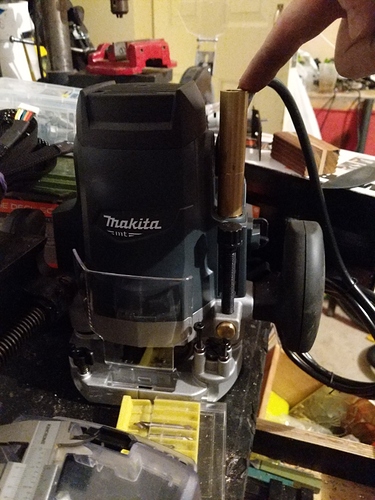 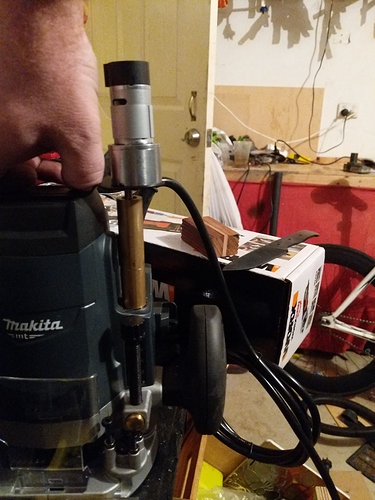 Also, this is my lathe. It’s in thou… whatever that means… 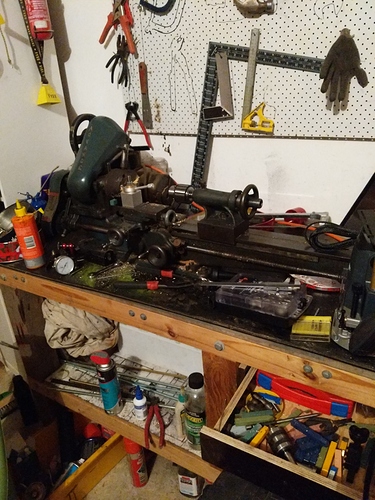 I’m not sure if I am following what you are trying to do here. What is the large “middle” hole for? The head of a machine screw? If so, I would use a piece of m10 threaded rod and thread locker to avoid this problem. However your approach will probably work fine. The key will be to make the plug just the right diameter to get a good press fit.

I thought if the whole piece was threaded it might make it harder for the motor to turn it. My “threaded rod” is built into the router and is captive at one end. It doesn’t turn. I need to automate in reverse to a rigid.
I was going to thread the plug, screw it in with some loctite and then drill and tap and grub screw through both to hols the flat surface of the motor top thingy in place.

Still not sure I fully understand. Could you make a sketch? I am, by the way, mostly a self-trained machinist, so I am not going to claim I know better than you how to do what you want. But I’m good at offering uninformed opinions!

This is working now… Well, on my kitchen table when I test the encoders. I need to secure the plate better than cable ties. But that can come later. I get some binding on the downward movement. I think a bunjee on the opposite arm should sort it 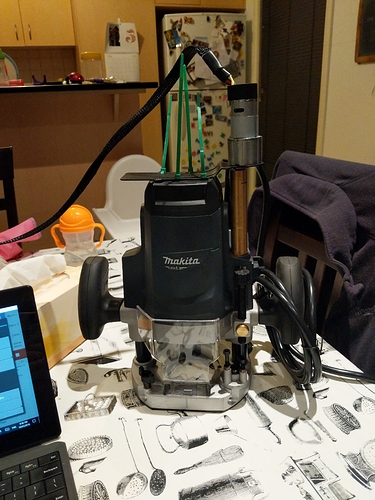 Interesting lathe, found a description in the UK lathe site. Much cooler than my 7x10! Are you in Oz or did it make it’s way elsewhere?

Hi Kirk, yeah it’s a cool tool to have in the shed. Variable speed without belt changes and mm instead of thou would be nice
I’m in Australia