Maslow Community Garden
GardenRobot June 15, 2018, 8:30pm #1
This is a companion discussion topic for the original entry at http://maslowcommunitygarden.org/PlyPad-Module-2-Shelves-.html
jwolter June 16, 2018, 2:16am #2 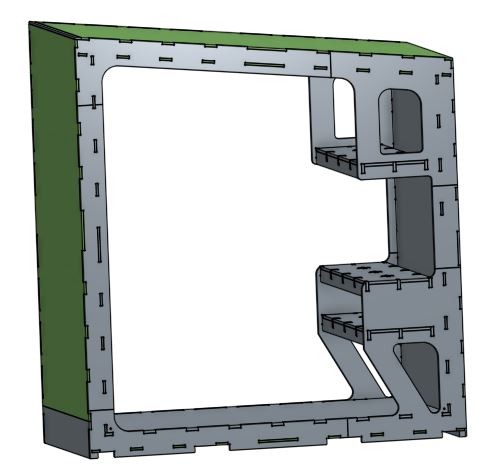 Yes, that was a typo on my part. I fixed it in the garden, but the robot generated the forums thread before I noticed the mistake

So if you were to edit the topic title in the forum, would it break a connection from the Garden to the Forum?

I have been a fan of the “affordable housing” concept since being an engineering student in college. Growing up poor also plays into that fandom as this PlyPad house is better than some of the places I stayed in growing up.

I do understand the original design has a spartan initial purpose (Kenton Women Village, which is a nice read) but why not take this concept a step further? A mobile studio apartment comes to mind.

From the looks of the pictures (no “in-progress” shown, so assumptions ensue) there may be 2"x4" joists/rafters used, if not then there should have been. To be a true “Made by Maslow CNC” project they can be omitted and braces made from plywood used. Plus it would simplify the material needs.

If it is okay then I am going to play with the idea and maybe post some drawings up for discussion. I do like the modular aspect of it but I think the module construction could be simplified and made stronger.

To add to simplifying then the metal siding and roofing need to go. Instead a “peel and stick” type of roll roofing material could be used. This material adheres directly to the plywood and any flashing. A strip could be placed at each module to module seam (added weather protection) then roll lengthwise lapping up the walls and up the roof run. If there is a need to take apart the modules then it can be cut with a box-cutter or similar.

Modules could be:
1 - end wall (so it could be butted up against any module)
2 - bed module (open on both sides so maybe a split floor plan for say: parent and a kid or two bed hunting cabin, transom window on tall wall)
3 - desk/shelf module (entry door on opposite wall with transom window)
4 - kitchenette module (sink, small/under counter fridge)
5 - bathroom (lavatory and shower only, use kitchenette sink)
6 - door kit (why not make the door from plywood as well?)

The foundation would essentially be two or three 3"x8" or 4"x8" pressure treated “skids” similar to what is shown in the pictures. The reason for the 8" is stated below in the “plumbing” paragraph.

Electric could be pre-run on each module with a connector plug at the base of each union wall (similar to how modular/mobile home units are done) to be connected on-site. If anything, wire the units for 12/24v so LED lights could be used, camping fan, RV roof fan, etc. Solar panels could be installed on roof with cake type batteries (like what if found in UPS units as they don’t off-gas while charging) stored in the floor cavity or on another a shelf. 12/24v would allow the use of a RV refrigerator as they run off LP but need an electric trigger). With that in mind then an RV type hot water heater could be used as well.

Plumbing (bathroom module) would be simple enough: supply runs up the walls, soil/waste goes through the floor. There should be plenty of room since wood and exterior covering has to be 6" above earth, per IBC (many building codes are based off IBC: Florida, North Carolina, etc.). Toilet soil pipe would only need to be 3" PVC, shower could be 2" PVC and tie into toilet line. Install an air-admittance valve outside for venting of the soil system. Supply lines could be PEX as it would not rupture when frozen plus it is easy to work with. If a toilet is added then a shower curtain could be installed for some semblance of privacy (double occupancy). Might want to install an exhaust fan (rv roof fan?) while you are at it.

It would be nice to get the design boiled down so that a Maslow CNC kit could be shipped or taken to various places (perhaps another country) to produce houses cheaply.

Just think of how many modules could be built with a laptop, generator, and a shipping container of plywood, screws, and “peel and stick” covering…news paper or plastic grocery bags can always be used for insulation.

This concept would lend itself to remote/off grid living as well (hunting camp, etc.). Build a couple modules and trailer them out to the woods with your side-by-side, quad, snow mobile, etc.

Thanks! The PlyPAD was very much an experimental project and we learned a lot of things. You suggestions are very much on point. The project is far from over (more on the future at the bottom) and suggestions for how to improve the design would be wonderful.

From the looks of the pictures (no “in-progress” shown, so assumptions ensue) there may be 2"x4" joists/rafters used, if not then there should have been. To be a true “Made by Maslow CNC” project they can be omitted and braces made from plywood used. Plus it would simplify the material needs.

We did use 2x4s to reinforce the corners and give us something to screw into. If I were to redesign it I would take out the 2x4s. We used rigid foam insulation bonded to both sides of the plywood to create a something similar to a structural insulated panel which turned out to be VERY strong. In the future I would like to experiment with spray in insulation as an easy way to create something similar even when the parts are curved. You can find more in progress here: The PlyPad — Maslow 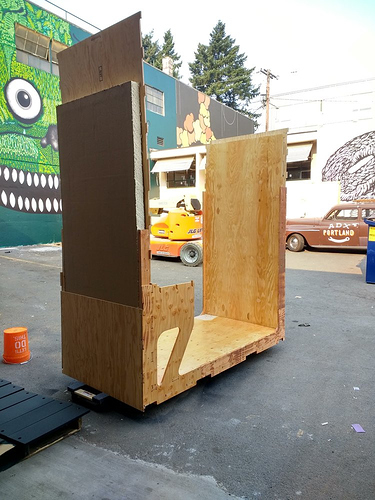 If it is okay then I am going to play with the idea and maybe post some drawings up for discussion.

To add to simplifying then the metal siding and roofing need to go. Instead a “peel and stick”

I like this idea. It would reduce the cost and build complexity.

I saw another modular type system mount the sink to the side of the bathroom module so that it stuck out into the kitchen when the modules were attached which was nice because then they only had to do plumbing within a single module.

templates/jigs could be setup at a common place/shop, assemble the units, deliver to site

We designed our modules to be moved with a construction forklift which let us take them pretty much anywhere, but renting a truck and forklift is expensive and it limited the size the modules could be. I saw someone else design a tiny house to be moved by a standard flat bed tow truck like this: 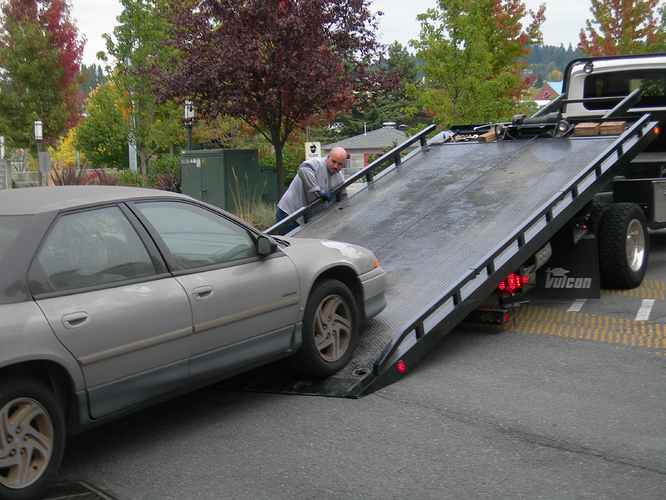 That would allow for bigger modules as long as they could be dragged into place.

What I am working on now:

The biggest thing that I learned from the plypad project was that the thing which really held us back was the software. To make plypad really practical what we need is a single program which has the following features:

We wasted a HUGE amount of time. Our workflow (which was awful) went:

Right now I am working on an integrated CAD/CAM program which will do all of that automatically so you can have multiple people editing the design in the same way we can have multiple people editing the maslow software at the same time. It will also do the layout and CAM automatically for all the parts, and generate a bill of materials so if you change one part (say switch which model of sink you want to use) all of the parts will automatically update, and the bill of materials to order will update with the new sink, mounting hardware, and pluming components.

Its still a few months away, but progress has been pretty good and I am really excited

Once the software is beta I am going to build another house, hopefully as a community design effort

This is awesome! The list of needs really summarizes many difficulties associated with Maslow work in general.

What program are you going to use for CAD/CAM? I only know Microstation and AutoCAD. But I am willing to learn. Sorry but I have not generated g-code yet as I am waiting on a Maslow Kit to arrive.

Right now I am looking at: 3" foam panels, 1/4" plywood panels, 3/4" plywood panels (they say OSB is stronger but I am not a fan of it), wood/multipurpose glue, #8x1" exterior grade screws, GAF self adhering base sheet, GAF self adhering cap sheet, sink, shower unit, toilet, PEX tubing, 2" PVC pipe, 3" PVC pipe, exterior grade door (with or without window unless one is made), some 3"x8" pressure treated stringers (foundation).

First item: structural panel - composite panels are pretty strong if built/assembles/fabricated correctly. What you are essentially building is equivalent to what a beer/food cooler wall/roof is assembled from. 1/4" plywood + 3" foam + 1/4" plywood, glued together will result in a panel (+/- 8 ft long in this case) that even a heavy person like myself could walk across. Plus that panel would provide good insulation properties.

Second: Considering that this is to be “affordable accommodations” of residential use then we can make the low wall 7’ tall (inside minimum) and the inside wall 8’ tall (full sheet). As long as we mount the wall so that the exterior of the walls measure 8’ apart then a full sheet can be use for the flooring. Remember, the less cutting, the cheaper, the less the labor, the cheaper.

I like the idea of the sink mentioned. It does simplify the plumbing option quite a bit. Since the modules are 4’ wide then a wall could be installed next to a standard 3’x3’ shower stall and the sink would only stick out a little bit.

Module size and transport. Harbor Freight sells a trailer kit that is 4’x8’ and is rated for about 1100# (SKU 62648). That is what I had in mind when moving these things. I am not going to say that four people will be able to lift each module (toilet could be installed on site to reduce weight, etc) but a cheaply made ramp could be fabricated to slide the modules up on the trailer. The idea is that someone, say in remote Alaska, can have the materials shipped in, fabricate the modules, haul the modules out to their property or as a remote hunting “lodge”, and do all this by themselves. Even if these modules are not light enough for people to pick up they should be light enough to use a winch/come-along to slide up onto a small trailer or skid (trailer would probably not roll very good in deep snow).

This looks to be a fun project to mess around with.

By “working on” do you mean “using something someone else made” or “programming myself”? Either way, I’m interested in details.

Onshape seems to meet these criteria.

There is also OnShapeBOM for Google Sheets that maintains a BOM on google, it
doesn’t include the costs, but if this maintains the parts lists and quantities,
I expect that the costs could be added.

P.S. I’d love to test your beta software, I have a bunch of carts I need to
build that I have setup in OnShape, but I think they would be a good test for
your software as well

I went back and checked, OpenBOM does support costs.