So I was in the middle of a big cut and the power went out. when it came back on my Maslow had home all screwed up, is there an easy way to fix this? Maybe pic up where I left off?

re-calibrate and start again (without moving the workpiece.

How were you connected? Laptop or pc? Did the computer lose power?

Connected via a desktop. I actually ended up lining it up as close as possible and trimming the gcode down to just that part that wasn’t complete 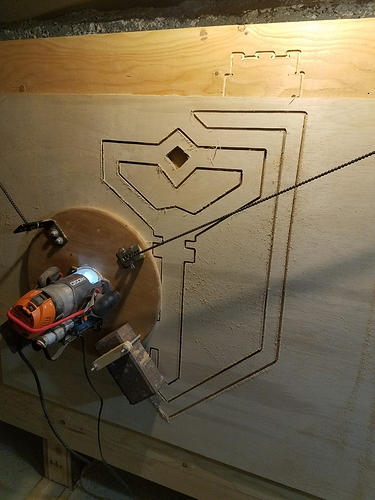 Is it possible that your power died coz there was too much Resistance?
ENL FTW!

When it is all done, there will be a shield out front with Resistance on one side and enlightened on the other

My home is an 1880’s historic site (steamboat captain saved people from a flood). Figured since I moved into a portal it may as well have a crest. Plus, i’ll never be able to hold it with that kind of signage out front.

When you turn the computer back on and launch Ground Control the file you were cutting and it’s position on the sheet will be saved. To resume the cut you will need to do Actions → Calibrate Chain Lengths Automatic to restore the home position. You can then use these buttons:

to fast forward through the file until the point you want to resume.

But judging from your other post you got it worked out

FYI - I added the note here from Bar to the Troubleshooting Wiki.

Thanks @Bee! I appreciate that you are keeping an eye on the wiki

@bar - Most welcome. There is a ton for me to do there. I am trying to knock down the Noobs 101 first, once I have the different “standard builds” documented. I will move on. This was just such a jewel I had to add it. I’ve had a request to put my documentation on the Alt Temp frame in there. I did and do invite others to add to the wiki. In a word I have taken a big bite in tackling the training wheels. I don’t want to get anymore side tracked than I do already. I don’t want to bite off more than I can chew. I would like to be considered for beta on your ring design because it will be easier to document as it’s developed then to play catch up. I think tomorrow I start building Logans Kit and I can’t wait to meet up with David to learn more about his kit.