Random jumps down when running gcode

I’m sure that you are right. Another peculiarity to add… on my work PC where it loads successfully with the portable release, it is consuming ~600MB. In the version I have running in shop (remember it’s 64-bit running from source) it is consuming >3GB.

when the cutting is done, I will test in more configurations and see if I can pinpoint anything. 640MB to 3GB is a big difference.

Like my exwife2 always asked, “Is this art or can I trash it?” 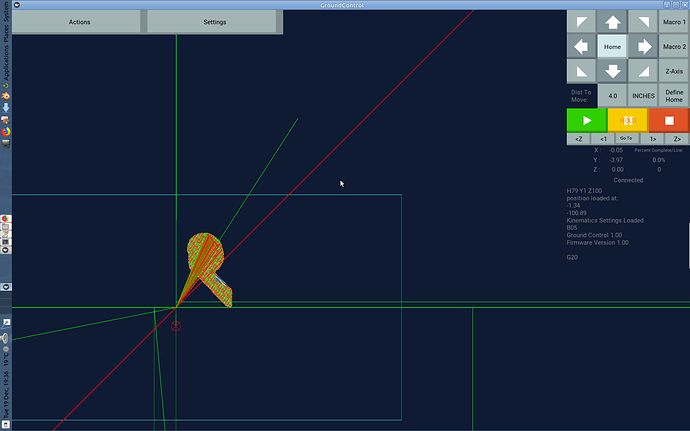 Anyway to trap for running out of memory and gracefully exit - Display an Error turn off the spindle and stop the motors?

I was able to complete the project… I’ll post some pics in a new thread when I get home.

After the initial issues and restarts, the last 2/3 of the plunges went to completion with no errors. So, the first set of errors (“the jumps”) I believe were chain skips that I just didn’t see. No repeats of that error after making a chain guide.

The second issue with the z-axis and sled losing control… may have been due to a cable was a little loose. Dunno.

Sometime between christmas and new year, I think I will setup a similar but slightly simpler project and see if I can get it to run through from start to finish.

Still need to do more exploration with GC limitations. The original file (attached above) yields very different memory requirement, depending on the computer it runs on. I tested last night:

How in the world does the same exact packaged version of GC use ~600MB on one computer and >3.0GB on another? OS-related? graphics card\library related?

Hey can I get a picture of your Z-axis motor/cable?