Ugh! Why? No matter what I do I still get miscuts

I have added rigidity to my stock frame, I’ve used bricks, I’ve added weight, I’ve lubricated chains, I’ve added chain guide, that I subsequently removed. My frame is rigid and doesn’t move at all even when I manuall press on it, but no matter what, I get chain slack and miscuts, especially around the edges of materials. Here’s some photos of my system for context. I really need help. I’m ruining more panels than I’m having success with. 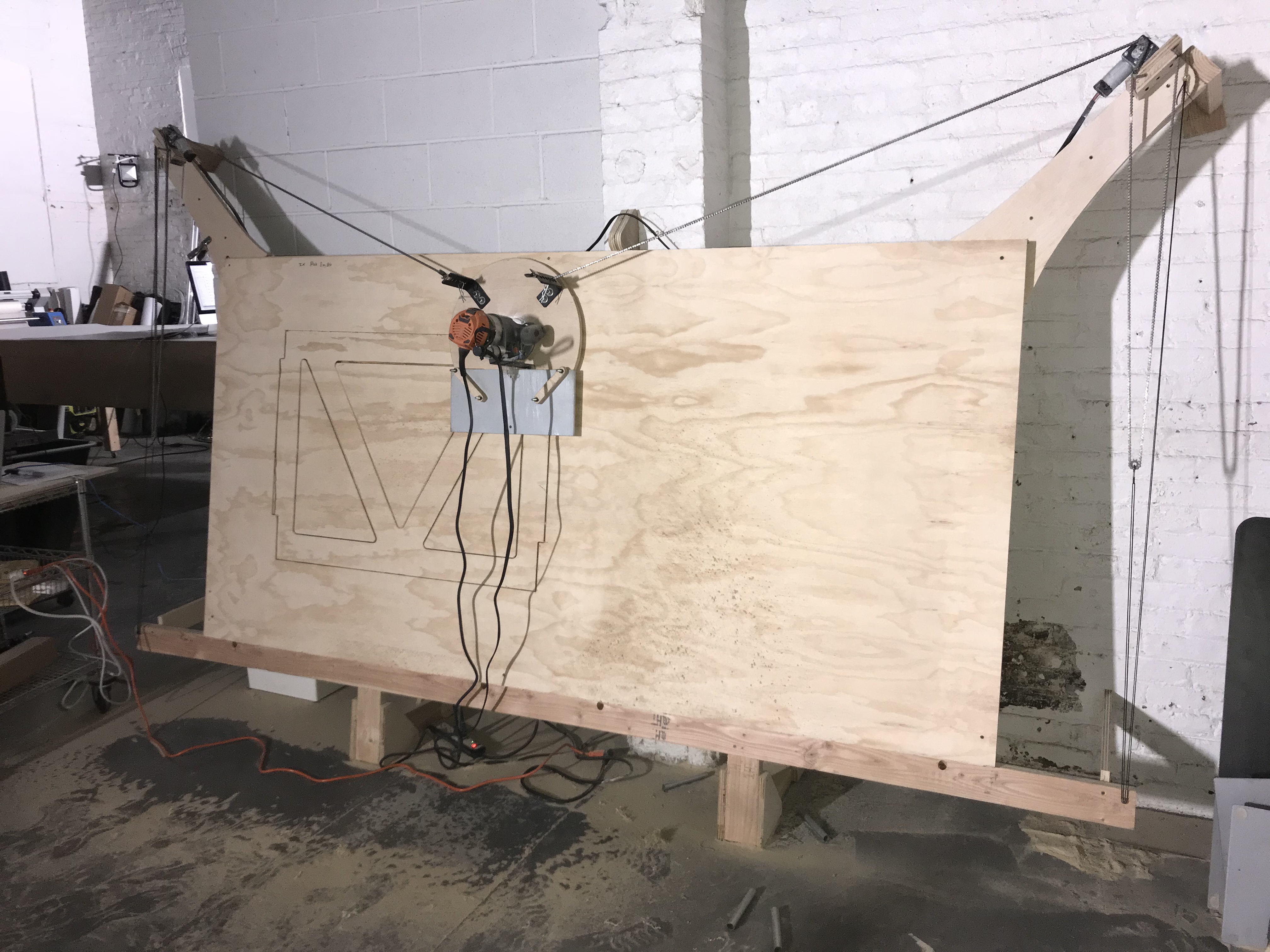 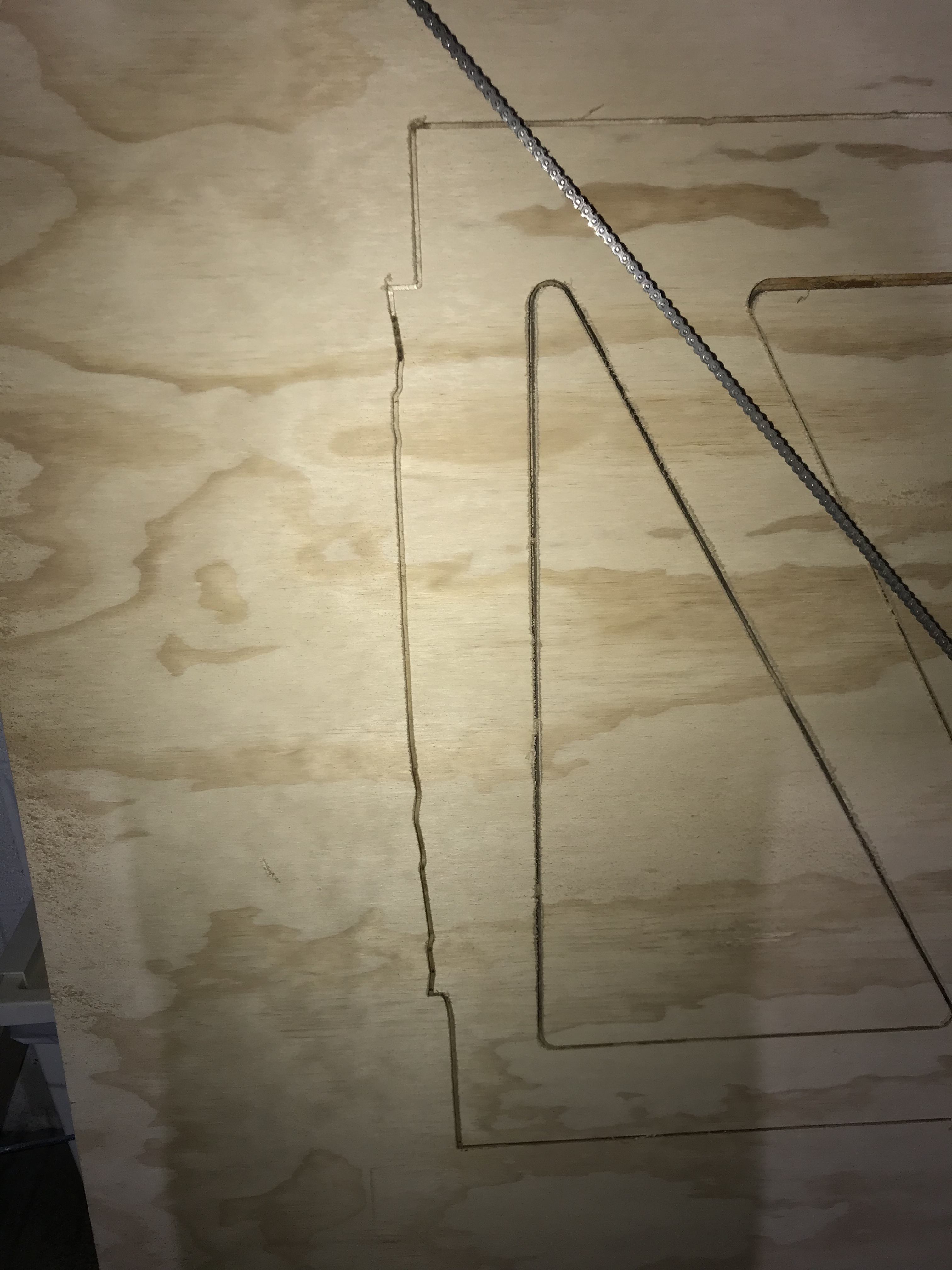 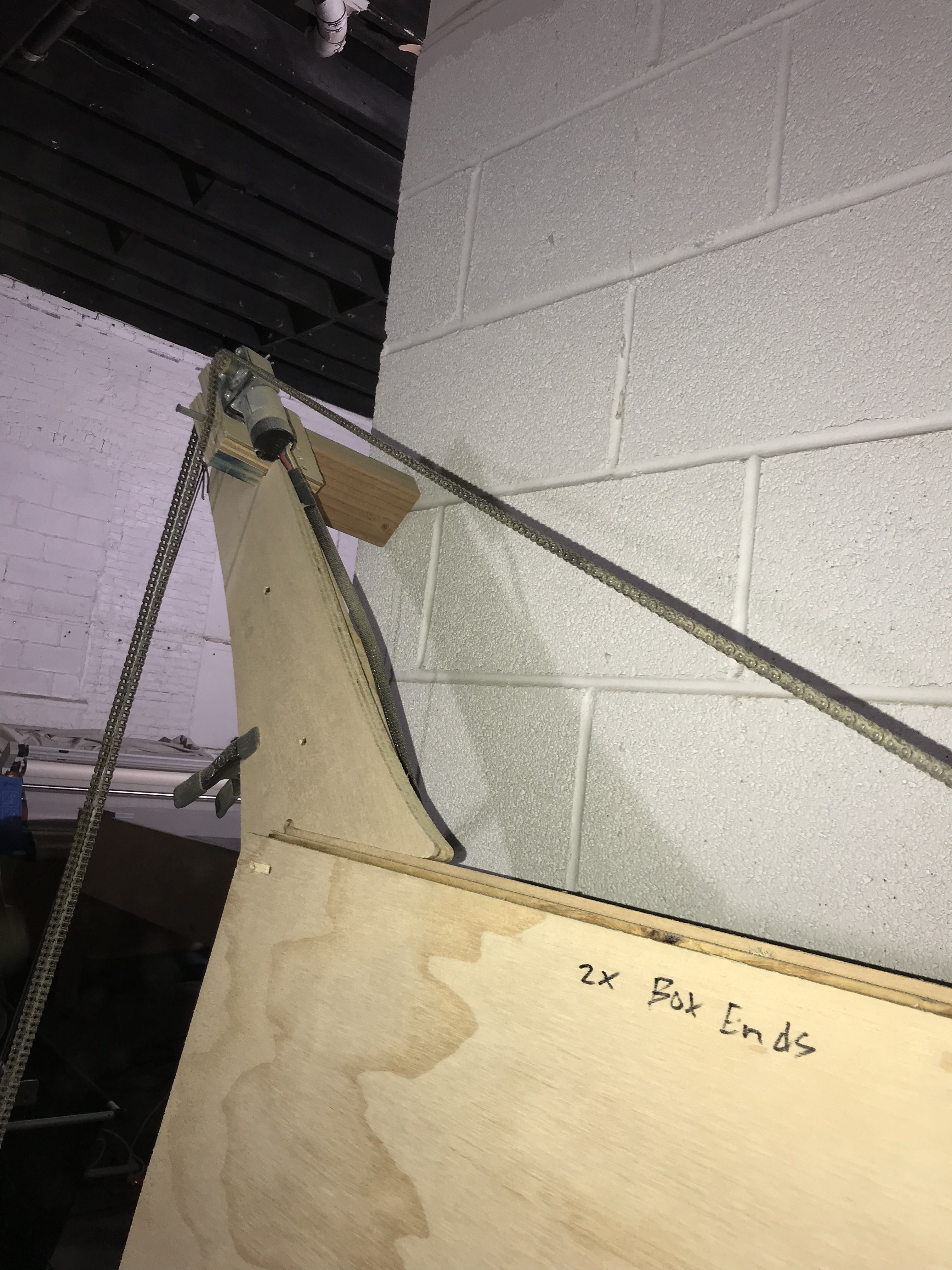 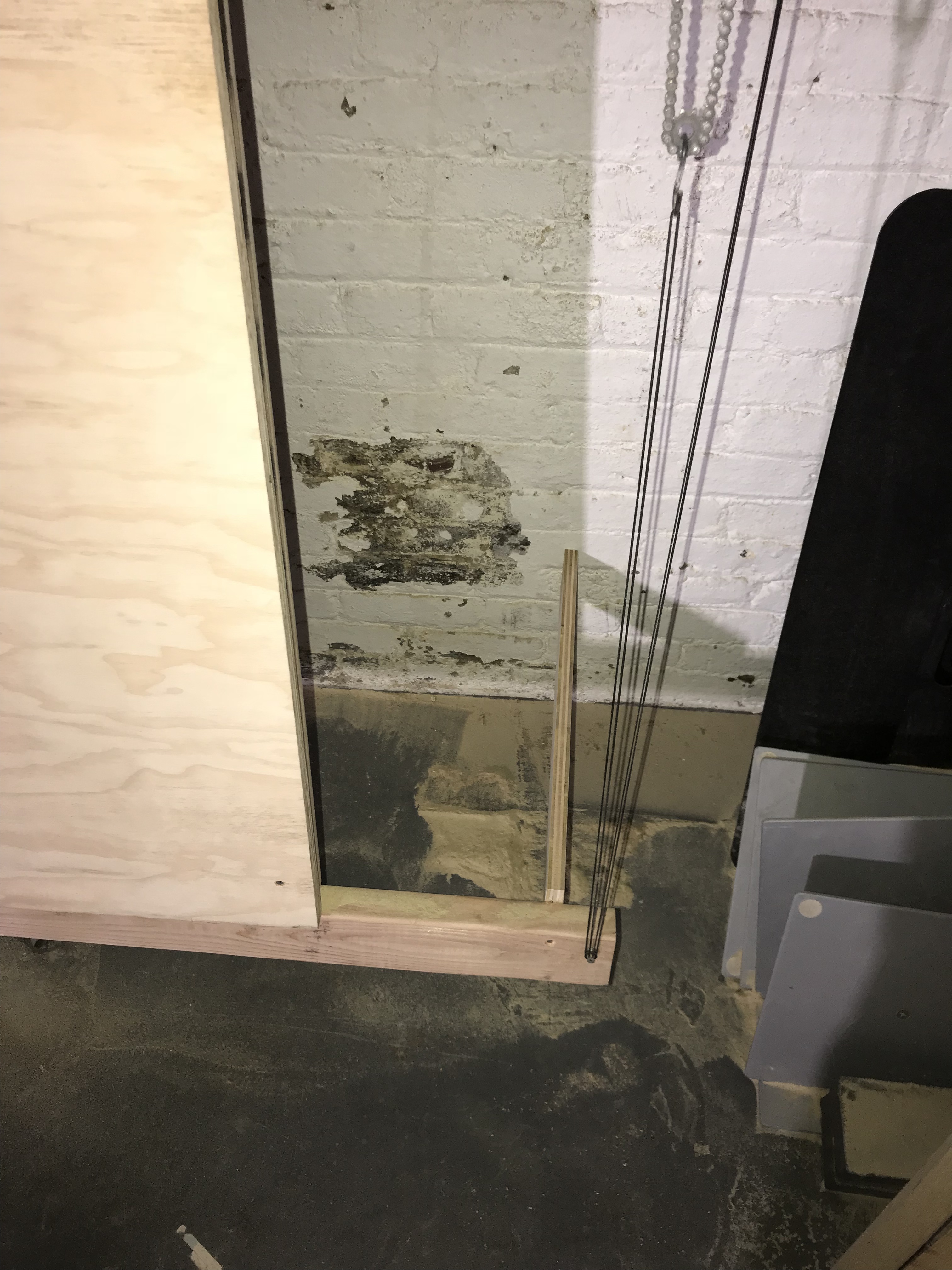 I’ve been using the most up to date firmware and ground control as of February 7th, I haven’t checked on an update since then but I assume this isn’t software. The machine has been calibrated and seems normal. My gcode is generated by easel and doesn’t seem to be the issue as it previews fine in ground control. My sled is very smooth and seams to ride nicely on the material. It just seems like when I get within 10” or so to the edges it will randomly sag and send my cutline off track.

I agree that doesn’t sound like a software issue.

Is the issue caused by the chain skipping (you would notice a sudden movement when it happens), or is caused by the sled not sliding smoothly along the wood?

My hunch is that it is the latter because it seems like it’s mostly happening in the downwards direction near the edges where the chains are providing the least guidance.

I agree with bar, the problem is probably the sled not sliding smoothly

you should e able to get closer to the edge than you are. a triangulation kit would help accuracy in any case, chain sag compensation only works with triangular kienmatics (but I don’ think it’s the cause of this problem)

is the sled moving up or down when it has this problem? you may find that changing the direction of cut may help the problem

can you post your g-code? (so we aren’t making assumptions about what should be happening)

Do you still see the issue when using a really low step down? It could be that the bit is having a hard time moving through the wood and near the edge there the machine has the least ability to apply force. When moving upwards the chains are under tension and the motors are powerful, but moving downwards only the force of gravity is available to help.

I don’t know how to adjust speed, cut direction, or step down. I think you’re correct in the behavior though. It’s not chain skipping. I finally solved that by adding rigidity to the four corners and center of the frame. I was getting chain skip in the begging but it seemed to be because there was too much flex in the frame despite being build to spec. That flex could have been material (weaker ply etc). Regardless, chain skip seems to be solved so now I need “sled stick” solution?

Correction. I do know how to do step down and speed in easel, but not in ground control. I assumed ground control was just reading the the g-code. Which I’ll upload in my next reply.

Here is the G-Code for this particular file.

sand and wax the bottom of the sled.

Ground control can’t change the cut, you are correct that it just reads the g-code

are we correct in guessing that the router is moving down in the area that’s not working correctly?

It seems to be the case that it goes off track when moving down towards the edges, Yes. Can you recommend a speed, step-down, and a particular wax that has proven effective?

Just to confirm that is the issue I would try to first run the cut with the bit not in the wood at all. Maybe just remove the bit from the router. If it seems to be all good, then I would try to slowly increase the step down in easel until it stops looking good. I would start with something like 0.05 and work up from there.

I would also say that so many of the improvements which are in progress right now exist to make exactly this kind of thing go away. The original frame design just wasn’t ridgid enough, and the switch to the triangular kinematics makes a huge difference for accuracy. We’re still really really in the infancy of this type of CNC machine so the improvements which get made every month are still really big. I know it can be exhausting trying to keep up with how fast things change (I’m exhausted trying to keep up and that’s all I do), but it kind of seems like it’s part of the territory of trying to invent a whole new type of CNC.

This machine and the new method of CNC and the community surrounding it and growing with it have been awesome. As you can see I’m very new to this and am not at all disappointed. My frustration is with myself for not being able to solve it on my own.

I was holding out for the ring system in hopes that it would help too, but I suspect the majority of the issues are from “sled stick” whether due to surface friction or bit resistance. My frame is rock solid now and very true in it’s dimensions. So I know, I’m on my way to making great things, with fewer miscuts, but if you could share a typical speed, step down setting, and even bit speed if that matters, (I currently run the rigid at maximum bit speed, 23000) it would be greatly appreciated. Also if there’s a particular wax that has proven successful, I’ll try that.
Some standard guidance on settings that have also been successful for others is appreciated too. I’m also not married to Easel if you think I should try another system with better compatibility or track record in the community. 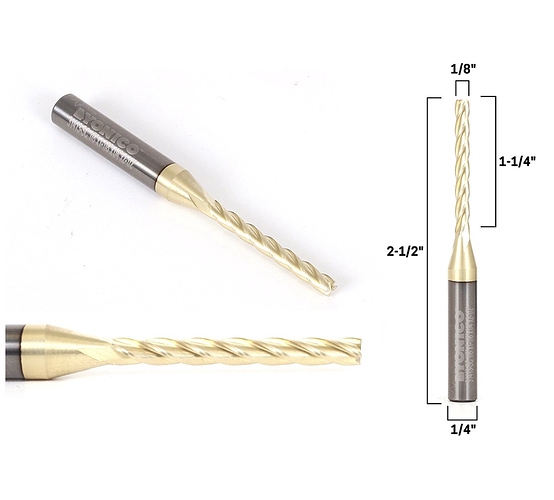 I think that going a little lower on the step down would probably be the place to start. The speed seems very reasonable. The general rule of thumb is that a good depth of cut for a given bit is half of it’s diameter so for a 1/8th inch bit (.125in) I would recommend starting from a .062 step down.

The trade off with bigger bits is that while you get your parts faster because you can go deeper with each pass, you loose the ability to do really fine detail.

That rule of thumb is a great tip! Thanks!
Now how do I get a linkage kit or ring kit in hand? I’d even be willing to try to make one if possible.

We’re working on getting the ring kits in the store as soon as possible, but we need to ship out this next batch of kits before we can do that, so we are still a couple weeks away from having them (but moving as fast as we possibly can).

@pillageTHENburn and @dlang both have linkage kits for sale.

@pillageTHENburn sells his through his etsy store which you can find here:

you probably want to go from max speed to min speed, and check if the bit has
overheated (discolored), which would dull it

as for wax, doing a quick search, it looks like “Johnson’s Paste Was” is a very
common wax for woodworkers to use on jigs, table saws, etc. I’ve seen it
mentioned here before.

if you go to the swap meet topic, the top pinned thread points to how to get the
two different linkage kits.

I don’t think the linkage kits would solve the problem you are having (I think
they would make the cuts more accurate, but not solve the sled sticking problem

one thing you could do is to move the wood to the right, so that you aren’t
cutting as close to the edge. that will make the chain angles better and will
probably solve your problem

I received one order today for a top mount kit, that I will be shipping out
tomorrow. (USPS priority mail, 2-3 days in the US). I won’t be home next week so
if you want one of those, it’s better to order it tonight.

If you want to make your own linkage kit, I’ve been looking for a chance to work
with someone who has an inaccurate maslow to cut a linkage kit that makes their
machine accurate. Look over the wood 45 degree kit and if you are willing to
tackle something like that (the biggest issue is how to attach the chain to it),
I’ll be happy to go through that with you.

Thanks David. I am definitely open to trying to make a linkage and test before and after results. I am going to work on getting this sled sliding perfectly overnight tonite and can, in the meantime, do any testing you would like to use as a control for before and after linkage. Let me know how you would like to proceed.
I am also going to put my chain pulley attachments on some blocks so I can slide the sheets left and right without interfering with chain take-up. This is something I have wanted to do any way for better chain tensioner alignment.

Hard to tell in the pictures; what angle is your frame at?

I just put my iPhone angle finder up to the cutting surface, it’s at 9.5°. Is that what it’s supposed to be? I built the stock frame easels.