Hi I am looking for Recommended router BITs for cutting 18mm MDF for 1/4" and 3/8" shank router. I am not doing find detail work, so looking for best cut rate etc.

What do I go with - straight, upward cut, downward cut - how many spirals? etc

There is a lot of science that goes into tooling geometry, but I’ll do my best to describe them in a manner that’s easy to understand.

The flute count mostly effects your feed rate. The more flutes, the more material a tool can remove in one rotation. As a result, a 2 flute bit will typically run twice as fast as a single flute one will. This is especially useful on machines that have faster max travel speeds. On the Maslow, we’re capped to 800mm/min because of the hardware, so I have found that I can’t run 2 flutes without on my machine without rubbing/burning the bit.

The professionals talk about ‘chip load’ for various materials and bits, how
much material gets cut off the workpiece by each flute. (the other factor is
surface speed that I’ll talk about below)

If the chip load is too high, the cut quality is horrible and or something fails
(the bit breaks, on the maslow the chains go slack and the sled isn’t were you
want it to be, etc)

If the chip load is too low, you are generating powder, not chips, and powder
doesn’t carry heat away the way chips do, and there is a lot more rubbing of the
bit against the workpiece (generating heat which dulls the bit, burns the wood,
and in a worst-case, starts a fire)

chip load is a combination of to factors

the desired chip load is specified per bit, with larger bits typically
supporting higher chip loads (if you think about it, there is more material in
the bit to support a more agressive cut, and a larger opening in the bit to have
the chips go into)

for the maslow, the key thing to keep in mind is ‘chips, not dust’

The professionals are interested in balancing the best possible cutting speed
with dulling the bits. In machining, the ‘optimum’ cutting speed is one that
dulls the bit in about an hour, so you change bits every hour but cut the
maximum material in between that. cutting a bit less aggressivly than the max
will make the tools last longer, until you are cutting too slowly and generate
too much heat instead.

surface speed is not a big deal in wood, but is important in harder materials.
It’s again a max speed (aimed at the max cutting to dull the bit in an hour),
but is looking at the speed that the cutting edge is going through the material.
It’s the RPM * the bit radius, so a larger bit wants a lower RPM

The maslow moves slowly, and the routers we are using have a fairly high RPM
(~10k), so to produce chips not dust (and the best quality cuts), you want to
have the maslow move as fast as it can without the chains starting to get slack,
with the lowest RPM you can get the router to run at, with as few flutes as you
can find.

Thanks guys this is very very helpful and thank you for explaining things in such great detail.

Looking at Amazon.co.uk I found these which seem to match the single flute upcut scenario - do they look okay? https://www.amazon.co.uk/gp/product/B07TVML3K2/ref=ppx_yo_dt_b_asin_title_o00_s00?ie=UTF8&psc=1

Seems to be quite a diverse range of prices in router bits. I presume you get what you pay for? Or are these disposable beasts and it’s okay to be cheap and cheerful?

I wonder if bit price may be inversely proportional to how much sanding you have to do… more $ on better bits = less sanding? I use the cheapies and I sand a fair amount. I consider it part of the experience, but your mileage may vary.

Looking at Amazon.co.uk I found these which seem to match the single flute upcut scenario - do they look okay? https://www.amazon.co.uk/gp/product/B07TVML3K2/ref=ppx_yo_dt_b_asin_title_o00_s00?ie=UTF8&psc=1

Seems to be quite a diverse range of prices in router bits. I presume you get what you pay for? Or are these disposable beasts and it’s okay to be cheap and cheerful?

sometimes the more expensive bits are better, but sometimes you are just paying
for the brand name. experiment over time.

no matter what you buy, they will get dull over time, it’s just a matter of how
fast. so you will need several, so experiment with different brands as well as
the cutting depth and figure out what works the best for you.

(I read a story of one company who uses their large format CNC to make boat
parts and they go through several $30 carbide bits per shift, but they have a
very high end CNC that moves very quickly and cuts a full 4x8 sheet in the time
it takes a person to pick up the parts from the other 4x8 sheet that it cut and
load a new panel in place, thei vaccume to hold the sheets down is tens of
thousands of dollars)

So what is the typical sign that your bit is dull other than discoloration from overheating (seen that). Does it fray or fuzzy more? Does the sound change? How do you track that?

Does it fray or fuzzy more?

This is a sheet of plywood cut with a dull bit: 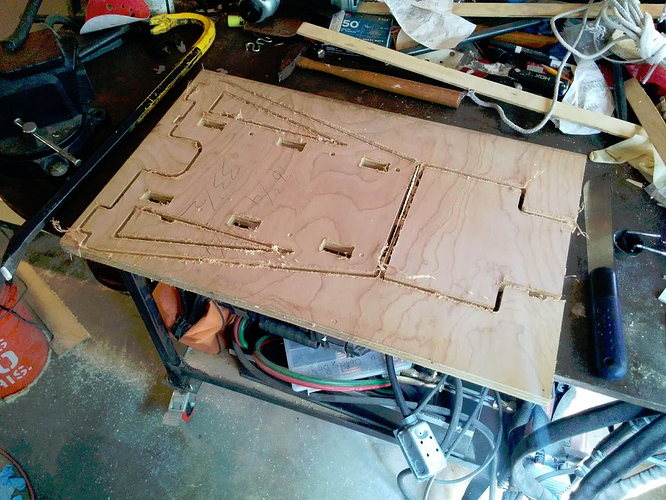 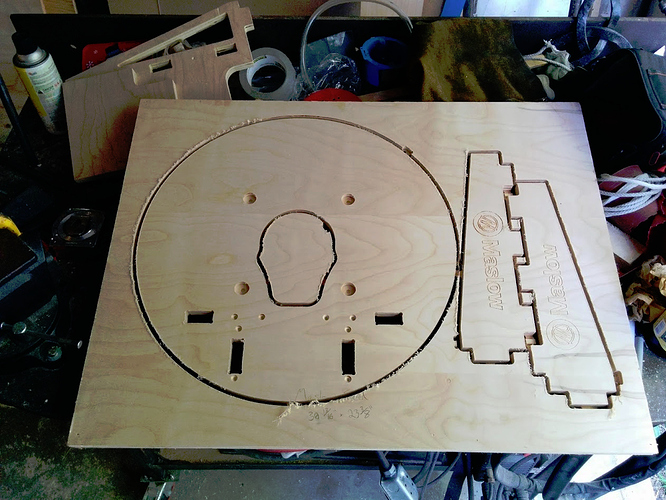 These both were cut with the tool I posted a link to earlier. You can see a massive difference between the two as far as fuzzies. The first one took an hour or two to sand by hand, whereas the second was less than 5 minutes.

You can still see some fuzziness in the bottom example, and that’s because it’s an upcut bit. There will always be a little bit to sand.

Alternatively, you could leave an allowance of a millimeter or two on your edges and clean everything up with a compression bit. Those have both upcut and downcut sections of the flutes so you get a clean edge on both sides. All the industrial routers I’ve run use those for through cuts. On the Maslow, though, it adds a tool change.

I guess you could also rough with one too, but that wears it out faster and they’re spendier than the other tools.

Thanks for that! I think the bit is dull… unless plowing through material too fast leaves fuzzies as well?

In my experience, when you overload the tool, it wanders a little from the intended line. Usually, it’s in the direction against gravity. Although, overloading the tool will dull it out faster, so they may go hand-in-hand. I typically will slowly increase the feedrate over several jobs until I just start to break tools, and then back it off until it’s reliable. The machines I was running would go through their compression bit and downshear bit every week. That’s about 40 hours of cutting between the two of them.

would the “wandering” also be something like bit chatter? I had a cut go slow on the last layer cut and faster on the others and the curf was wider where it went faster. Maybe that is simply bit deflection and vibration or dull plus too fast?

That wandering is a combination of things, tool deflection included. That’s part of the problem with running smaller diameter tools, they deflect so much sooner than a 3/8" or 1/2".

Also, as the tool dulls, it won’t be able to do it’s job as effectively and will dull even faster.

I put in a new bit, sped up a little and cut shallower and wow is the cut cleaner… 5/8" ply i dont think ill have to sand it.

I think shallow and fast is the way to go