Hi, I am looking at routers and from reading other cnc forums, it seems that rpm’s around 5,000 might work best with Maslow feed rates to get a good chip size. Single flute bits would help too.

Most home/hobby routers used seem to run far faster than this but I still see nice results, is there something I am missing? Does router speed not actually make that much difference?

I did see a forum post about having an rpm, bit, feedrate, material database that we could all share results on, but can’t find it again.

All input appreciated, thanks,

we are cutting, but going to single-flute buts and slowing the router to it’s
limits (~8000 rpm) and everything indicates that a slower router (or faster
machine) would improve things more

While a continuously variable spindle speed is definitely better, it sounds and looks like people are getting excellent results with off the shelf routers. There have also been some posts linking to router speed controllers that might be usable (there is one posted by Bar in that thread I linked to)

So long as you can find a router that doesn’t derate its power at those speeds, that would be a good idea for the Maslow. We’re limited to a max feedrate of about 1000mm/min, which is slower than commercially available machines.

Going to 5,000 rpm would allow you to use 2 flute bits on your machine without excessively dulling them. Based on a chipload of 0.006 for a 1/4" upshear bit, you would need to move at 1500mm/min with your spindle at 5,000 rpm. This is still above the Maslow’s maximum feed, but it’s much closer than the 3000mm/min that you would need at the Rigid’s lowest speed of 10,000 rpm. So it will still prematurely dull your bits, but not as fast as it would at the higher rpm. Also, you could experiment with increasing your depth of cut to get the chipload closer to where it needs to be.

This is the wiki page on tested materials. Feel free to add to it as you make your own discoveries! 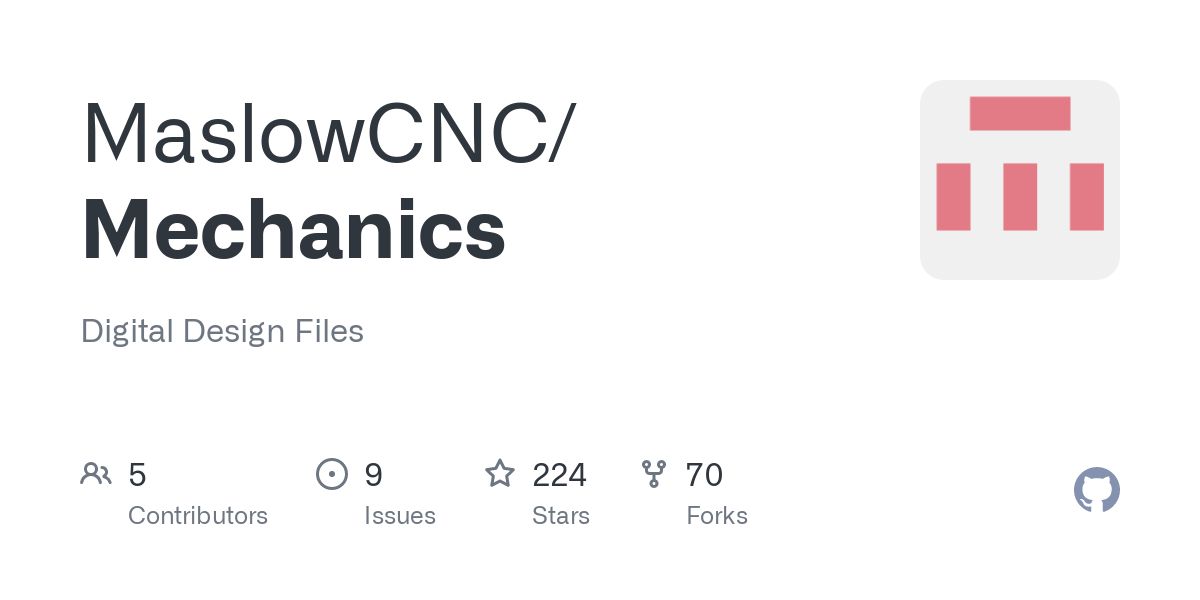 And the router bits that we have tested so far. Again, feel free to add to this.

Thanks all - links and reading much appreciated!

So I was with you until the 3rd paragraph. I agree with your calculations that stock router is too fast, compared to the speed of the Maslow, but then you say that you personally run 500mm/min @ 12,000 rpm, which is both half the max speed of the Maslow and more than min speed of the router. So why don’t you run 1000mm/min @ 10k with single flute to get as close to the chipload as possible?

Unfortunately, while the chipload charts do a great job at getting you in the ballpark, they’re not exact. I use those charts as a starting point, then dial in my feedrate to what sounds good. Generally speaking, the louder the cutting noise, the less ideal the speeds are. Also, the chiploads that I used to calculate my feed rate were for a different manufacturer’s tooling. The tool that I referenced in my previous post is the Maslow Store single flute bit.

In running feedrate tests, I originally tried running 700mm/min @ 10k rpm but immediately the tool started groaning like it was being badly overloaded. After a couple of iterations, I came to 500mm/min @ 12k rpm without any bad tool noise. This would give me an ideal chipload somewhere around .0016 instead of Onsrud’s .004 for their tooling.

I still want to try to see where I can get a faster feedrate so that my programs don’t take as long, but I haven’t gotten time to experiment with a good feedrate at 20K rpm. Using the above .0016 chipload, I would (in theory) be able to get ~850mm/min @ 20K rpm. This is, of course, assuming that the harmonics (I think that’s the right term?) of the tooling can handle those rpms. See this article for more information on ideal rpm.

All this being said, I’m planning on using this bit to reduce the tooling cost. I might also go for something more like this upshear and this downshear if I really need a spiral bit for a cut. This will mean that I’ll be phasing out the Maslow store bit for my primary cutting tool. One of the big reasons for changing to longer flutes is so that I can do a finish pass the full height of the material.

They’re more or less an 1/8" single flute down-spiral bit - which shooooooooould get me very close to a “by the book” speed and feed for the Maslow and my lowest router speed of about 11,000rpm.

Will it work? I have no idea, but a multi pack of rotozip bits was cheap enough to try at around $2US per bit.

All this being said, I’m planning on using this bit to reduce the tooling cost. I might also go for something more like this upshear and this downshear if I really need a spiral bit for a cut.

I really like the bit with the replaceable cutter. I found it on Router Bit World and they also sell the replacement knives for it. I think that I might give it a try. Thanks

Router rpm ranges are based on diameter of bits. Smaller bits typically can use higher rpm’s, whereas larger bits (2" or larger shapers) need to be run at slower speeds. I talked with my shop manager and his suggestion was full blast (~23,000 rpm) for a 1/2" bit.

Does anyone have a recommendation on what speed to use for an undersized 3/4" plywood router bit for cutting dados?  I have a bit, but after not many uses...

That does look good, especially since you can then buy the inserts for like $20-30 for 10, plus you can flip the inserts and use them twice. As long as it cuts well. Has anyone used one of those straight insert bits for cutting plywood?

Router rpm ranges are based on diameter of bits. Smaller bits typically can use higher rpm’s, whereas larger bits (2" or larger shapers) need to be run at slower speeds. I talked with my shop manager and his suggestion was full blast (~23,000 rpm) for a 1/2" bit.

That would be a good idea on a gantry-style CNC router, capable of much higher feedrates than the Maslow. We’re currently limited to about 1000mm/min, which seriously affects tooling choices. For example, if you used a 1/2" two-flute bit, you would need to be running the spindle around 2,500rpm in order to not burn out bits. Given that the default router for this project, the Rigid R2200, has a minimum speed of 10,000rpm, it’s forced our hands on tooling. I would like to try to use a CNC spindle with a VFD at some point to get those lower RPM’s needed for larger tooling. Alternatively, you could use a super PID to control the Rigid router’s speed.

That does look good, especially since you can then buy the inserts for like $20-30 for 10, plus you can flip the inserts and use them twice. As long as it cuts well. Has anyone used one of those straight insert bits for cutting plywood?

That’s the thought. I know @Bryan_Pollock has used one on his machine and gotten pretty good results. We talked about the tool in this thread a little while back. I’ve been watching the price fluctuate on Amazon, but it’s been staying around $60 US for a few weeks, so I might just bite the bullet and buy it at that price.

I use 4mm bits, they cut less material so less strain on the machine.

I successfully made cuts last night with a 1.8mm bit. Plunge at .05 (.2 total depth) and sled speed of 20in/min. It worked really well.

Deleted all the pictures and posted them all in the project section because that is more appropriate.

Abide in Me Plaque for my wife Projects

Many people say the saying HAPPY WIFE HAPPY LIFE. Well I take it serious. When I start something new in my shop, I always make sure the first thing I make with a new machine or new tool is for my wife (and I guess the majority of my builds) anyways with that in mind This is my first real project actually the 3rd cut on my machine but the first thing that will go on the wall. I am still learning but making great progress. I actually was able to use multiple bits 90 degree v-cut, 1.8mm, 1/8" and 1…