Still in the calibration stage, but I made a thing that has helped with Z calibration, and I think is extremely important.

The gauge is stuck on to an extension of the ring bracket and sits alongside the body of the router.

Attached to the router body is a pointer, aligned with the gauge. The pointer shows the position of the router body within its range of movement. I’d like to upload a photo, but I can’t from my phone. It’s pretty simple anyway.

This would have been helpful last week when I commanded the Z-axis to plunge 16mm into the workpiece despite only having 2mm of available travel due to having a short bit. That escalated quickly.

Now, when I set zero for Z on Ground Control I can see how much travel is available above and below that point (even if it doesn’t line up with the 0mm point on the scale). Then I know if the router is going to hit the end stops during the job or not. 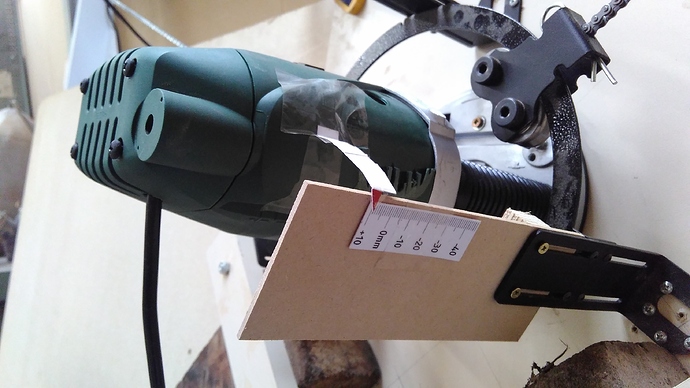 As everyone can now see, it’s pretty simple, however, I have found it to be immediately useful.

Once we have cut the final sled and moved the router I will make a slightly sturdier version. We got about 30% through cutting it and lost the USB connection. Grr.

It sucks that you have to cut off the original depth gauge of the bosch, otherwise you could just glue that one in place at the bottom.

Yes and no. My new gauge has an offset zero and a positive and negative region which should match the position reported by the Z-axis (if the router bit is long enough).

In the photo the gauge is fixed and the indicator moves. It’s also on the ‘underside’ on the right hand side. Our tablet running Ground Control is on the left.

We have now cut the final sled, so I will reassemble it with the gauge on the router body and the indicator on the base. There is an M6 threaded boss at the ‘top’ left of the router base, so I’ll insert a threaded rod in there with the indicator on it. Pictures will follow, assuming it all goes together properly.

Pictures of gauge. The rod is 6mm steel rod threaded M6 and installed into a threaded bush that was already present on the router baseplate. I added a locknut to stop it coming loose. The pointer is a simple 3D-printed shape coloured with a red and black Sharpie. The gauge is printed on a laser printer, glued to cardboard, and laminated with clear parcel tape. It is attached with double-sided foam tape.

The gauge shows the mechanical range of the router’s plunge movement, and an indication of where the router body is in that range. This is useful to see that the Z-axis motor is not going to exceed the range during operation. The zero position is nominal, but useful if your router bit is long enough to touch the workpiece with the router so high. 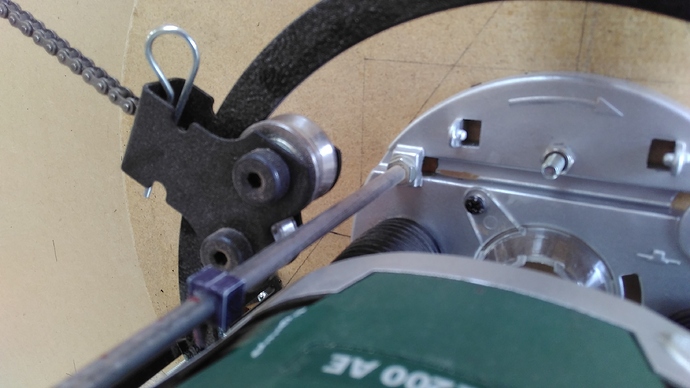 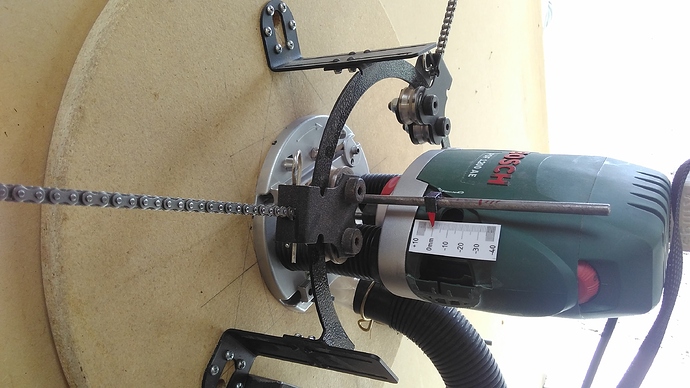