And low and behold, the kit arrived! Woo! 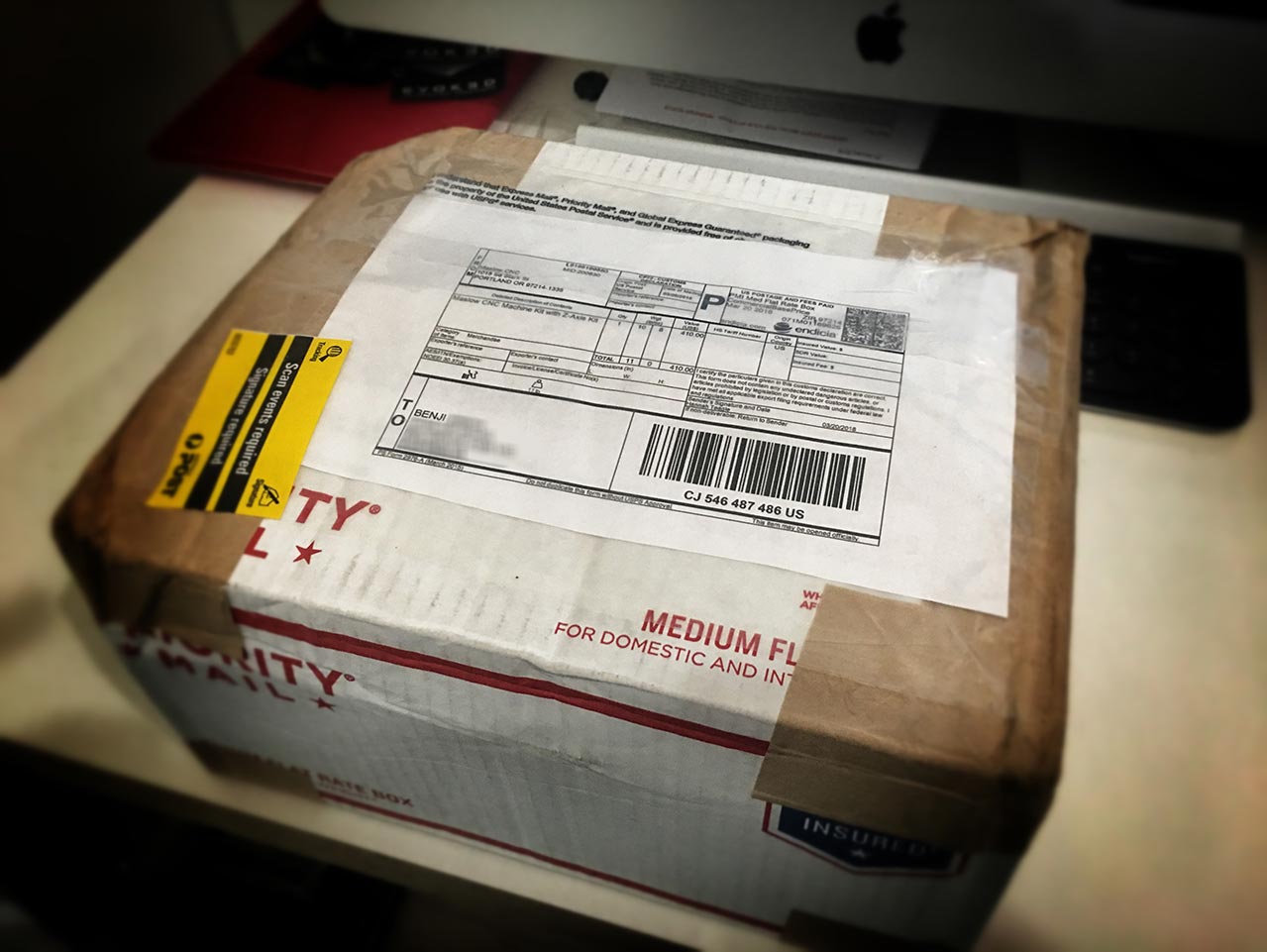 its_arrived1279×961 117 KB
Thank you @bar @hannah for getting them out so quickly.
You’ve beaten my GlowForge order to arrival by 3 years

Well, with the easter long weekend starting tomorrow I guess I’m going to put the Bosch POF 1200 to the test. Will post over the weekend when I’ve made some progress. Will also get Ned’s z-axis mount printed next week and see if I can get that batch made of nylon parts.

Any news Benji? How’d you go not opening the box until after work? My kit is on way from Sydney up here to Newcastle… nail biting stuff.

Alas limited news. I opened the box. Looked over everything and then had to deal with a very sick family, both kids and wife were rather sick over the long weekend. So I didn’t get a lot done. Am hoping this weekend opens up a bit. Am going to go down to bunnings on Friday and pick up all the frame materials.

Sorry to hear that Benji. I’ve been in a similar predicament here with our family actually! Package is on its way still, so I’ll be trying to get some time as well this week. If I find anything useful for anyone I’ll post here.

So I have a cunning plan. I have the old version of the cheap shit Ozito router, mine is about 15 years old now, but the design hasn’t changed. 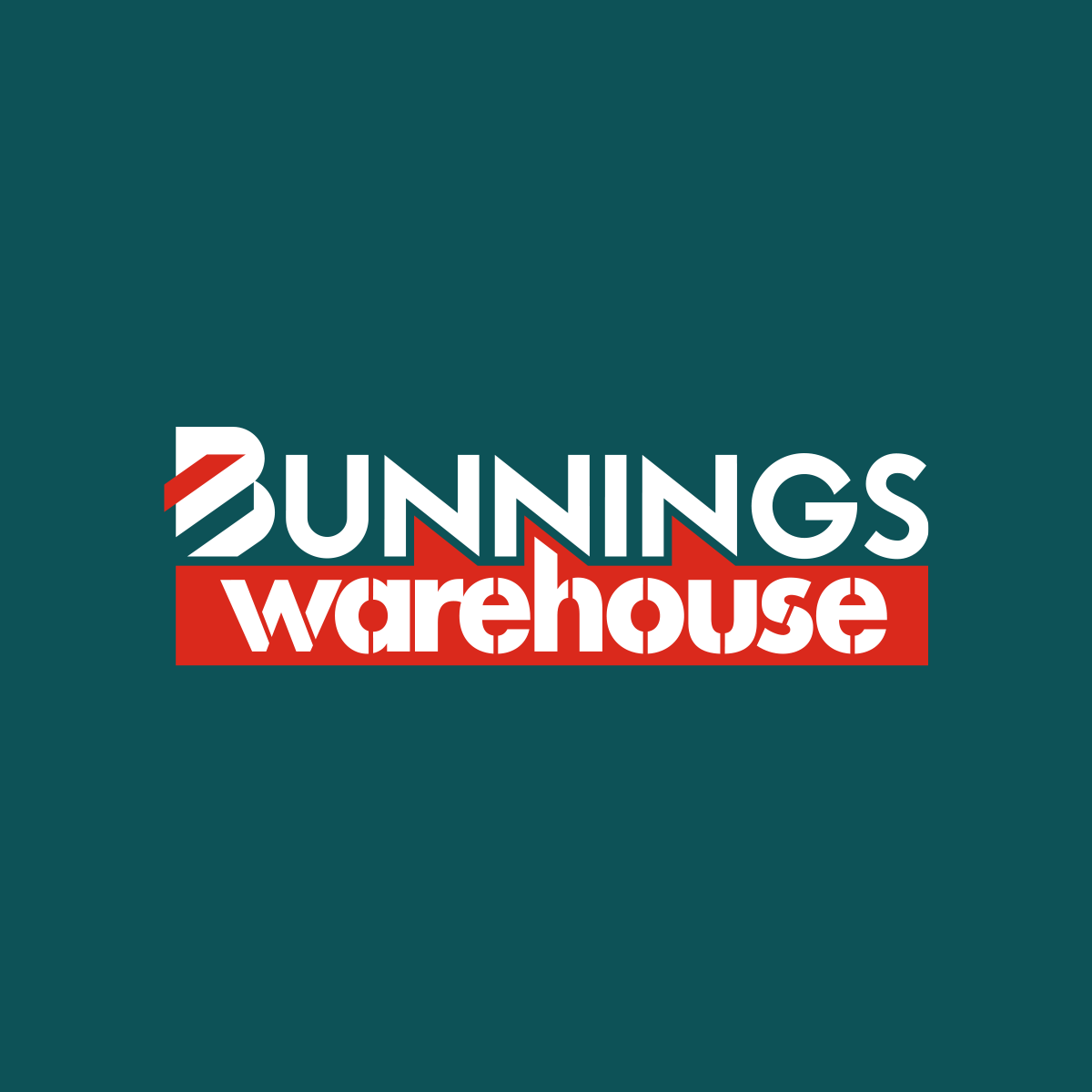 the depth gauge has 3 threaded posts at the bottom so you can quickly switch heights for multiple passes. They can be removed with a screwdriver and shifter. I 2 plans

Risks - The compression is only on one size so it will either jam, or the springs may be too strong. in the latter case I can remove 1 or both of the springs

Benefits - simple to construct and cheap as hell if I bust my router to replace it. Also give me full depth control over the entire travel range

So I did a quick an dirty prototype tonight and it (mostly) works! It literally took about 30 mins start to fin. Note I haven’t even built the frame for my Maslow yet so… 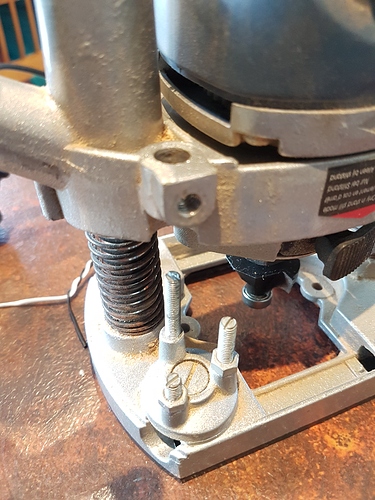 I cut a lengh of the tube. I had no idea how long I should make it so I guessed. As it turns out my proof of concept one is a little too short, it probably needs to be in the region of 15 - 20 cm or so. I ground down one end slightly on my bench grinder but a file will do the same job, this was due to it being ever so slightly too big for the shaft coupler.

Next step is to press the nut into the other end of the tube. to do this I inserted an 8mm drill bit (or what ever fits your tubing) into the pipe section. This allowed me to clamp the tube securely without crushing it. 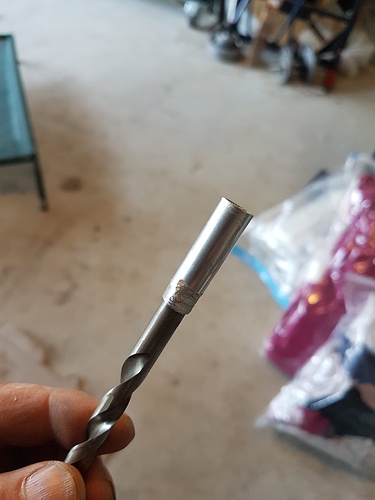 Next I threaded the nut onto a short section of thread (it was actually the short post off the router) and used some multigrips to grab the thread. 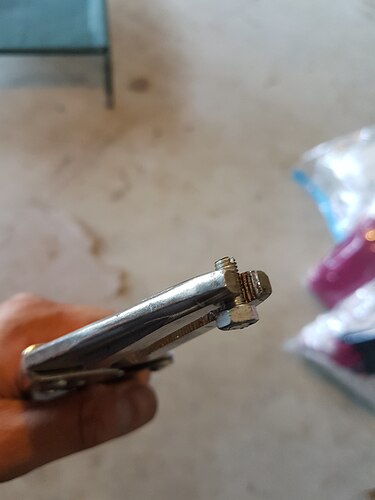 I then use a hammer to press the nut into the end of the pipe being careful that it was centered and square as I went. 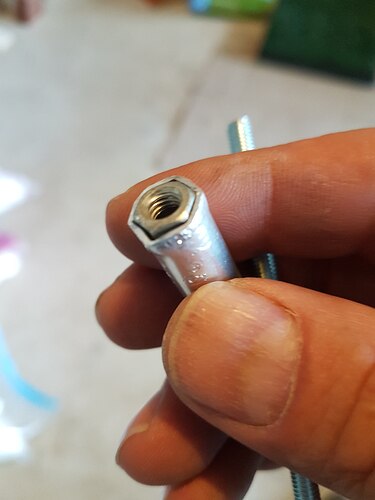 Aluminium has a tendency to deform so I used my bench vice to press the tube back around each side of the nut. The nut was loose but that really doesnt matter in the final assembly. If it was a mild steel tubing it probably would have pressed in and stayed.

Lastly I cut the head off the 80mm bolt. I would have preferred to just to buy some all thread but it didn’t come in metric sizes.

To assemble I threaded the 80mm bolt into the post base and then added the 2 washers and the nut and sprayed the whole thing with silicon lube including the router posts to make it move more smoothly. 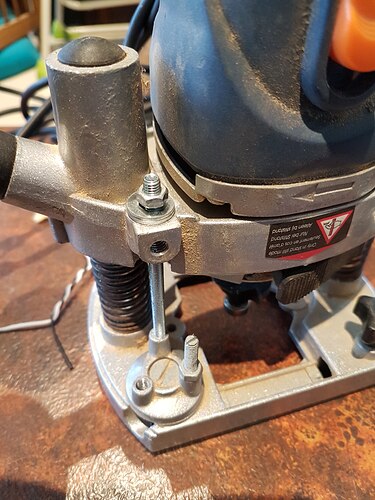 The washers gave a smoother bearing surface than the sintered metal body of the router and to give a flat surface for the nut to press on (rather than the oversized hole that was there. 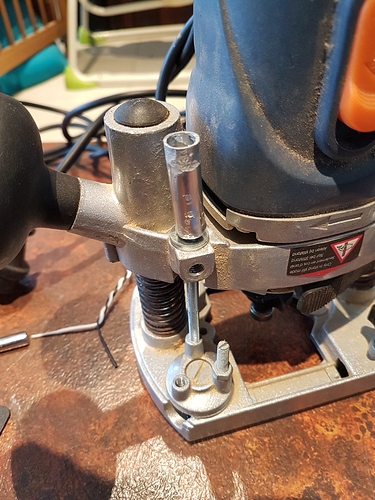 Lastly the tubing was inserted into the shaft coupler and motor. The fact the nut came free made this a whole lot easier. As noted at the top the tube is either too short or I need to trim down the thread as the thread travels up the inside of the tube and hits the coupler before the bit is all the way down, I will probably do a bit of both once I know the length of the longest bit I will be using. 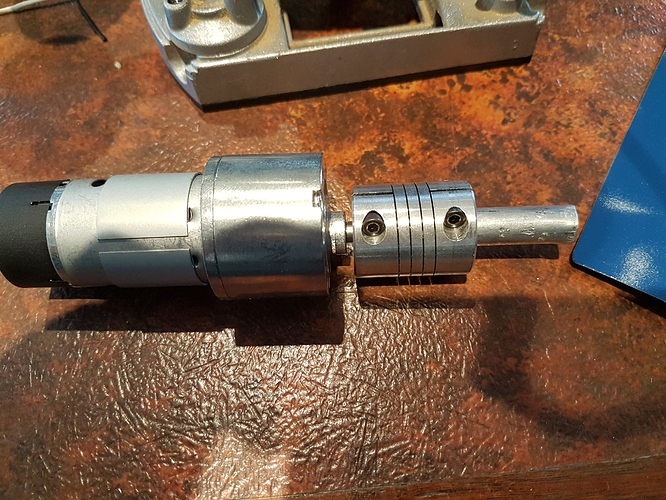 At to show it all works! 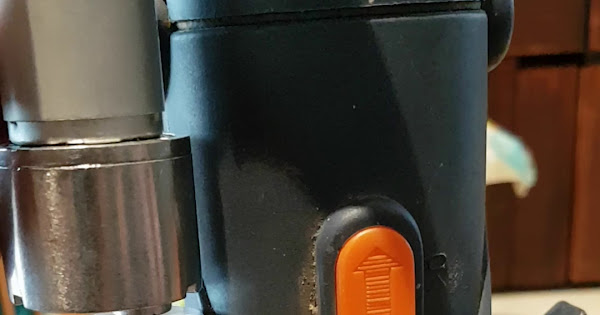 There didn’t seem to be any torque issues with the motor at all that I could see. Only issue was the hex heads of the coupler hitting the body of the router but that wont be an issue if I mount the motor higher.

I tried to remove one of the springs on the router to reduce the torque the motor needed, only 1 spring wasn’t strong enough to raise the body of the router, however. This may not be an issue once it is mounted on the sled as it will be horizontal (mostly) so I will retest once I have built the frame and calibrated everything.

Hi @Firewuff great to see this working and get the info on the motor’s ability to handle the torque etc. I am going to try something similar with the base of a Bosch POF 500 - as they are easy to find and relatively cheap secondhand at the moment and have a 43mm clamp so would allow a Kress or similar router/spindle offering lower rpm’s. 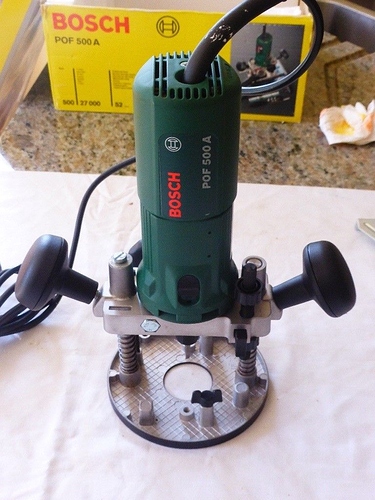 Ive Tried both of these
Bosch POF 500 with Kress Clamp, ran it for a few months but found Z Axis unreliable, too much freeplay
In March I bought a 1200 (£60) and used Neds modification (“Bosch POR 1200 AE Height Adjust modifications”)
Im getting great results and would highly recommend it

Grateful for all info!

I forgot about the 1200 AE mod thread. read that last year when I first ran across the Maslow project. may have to put some pennies aside to get one

It was a kress clamp on the bosch 500 router 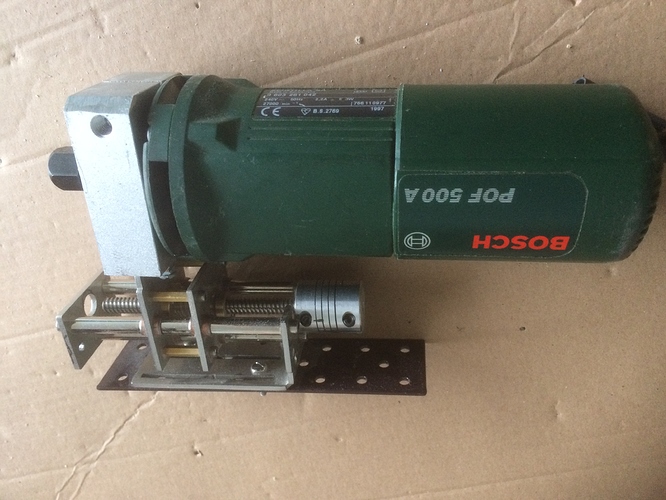 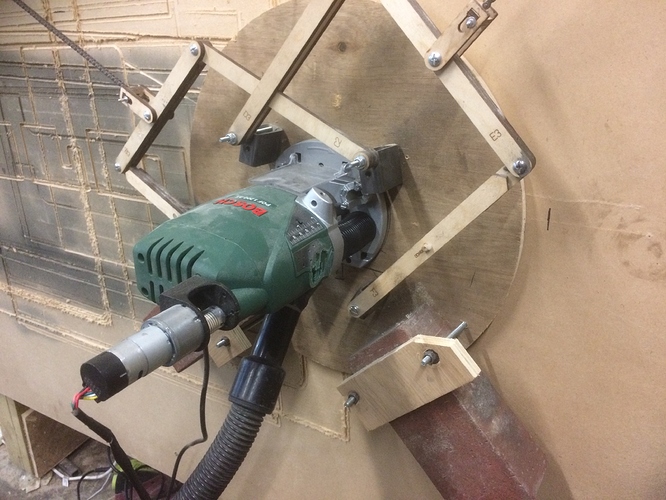 Hey everyone interested in the Bosch POF 1200 mount that @ned made. I’ve finally got my Nylon sample made. Will be picking it up tomorrow. 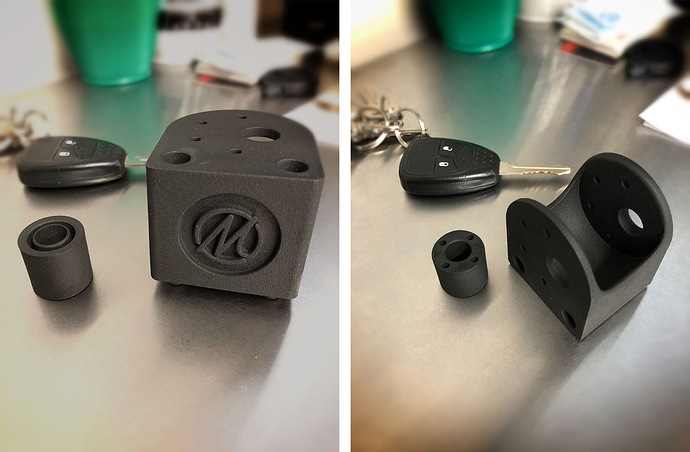 All going well I’ll get the batch made up. Will be in touch with everyone that’s DM’d me in Australia.

Nice one Benji, keen to see how you go

Get Outlook for iOS 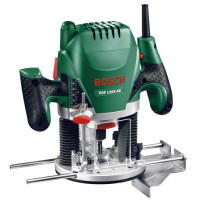 Yeah that’s where I got mine. Tis a good deal and it seems like most of them have at least one in stock.