Save Project Layouts - Save Scrap

What does everyone do once a cut/project is done but you still have some area left in your board that you could use for a future project? Can these layouts be saved in Ground Control (I thought I saw a review video where it was mentioned this might be included in future updates)?

Say you cut a project out of board A, then do another project in board B, then a smaller project comes along that could fit in some empty space left over from board A. How could you utilize that space without getting crazy measuring things in hopes that it fits with no issues?

I have never done any of this before but it seems like having a master dxf or other file format that has all your cuts “documented” on it would work. Then you only prep the new shapes you want then create the code only off of the shapes (using the old shapes as a reference for where you can’t cut). Is that even possible?

I don’t know about saving layouts, but I save a lot of my scrap pieces after I cut parts out of a fresh sheet. It takes careful placement, securing the piece to the spoilboard using either screws or brad nails, and securing scrap pieces of the same thickness and position them around the piece being cut to allow the sled to ride parallel to the surface.

At work our manufacturing software can keep track of scrap pieces. You can tell it to use some of those scrap pieces when making a nest. But in all honesty, it makes the system more cumbersome and can actually make more scrap pieces if it can’t fit everything on the existing offcuts. Not saying that this isn’t possible and that it may be more suited to our application than in a busy mill.

This was suggested in at least one or more threads. It is in the works? Until then when using a laser cutter you just move the tool to an unused area. On the Maslow you can do this or just center the scrap and secure it, then orient the cut and redefine “zero” or the point of origin. Then Run the cut.

I was thinking along these lines when I was trying to figure out exactly where to position home to do a new cut on a board that I had already used. My thought was to see about importing a picture and then have the software scale it to the grid that’s on the screen. I don’t think it would be complicated to pull off as there likely are libraries available that can accomplish, at least, the scaling part. Maybe put “markers” on the corners to facilitate the adjustments.

With the image there, you could move your home around until it gets to a good area. These images could be stored on the GC computer and loaded to see if you piece will fit in the uncut area.

Even cooler would setting up a little webcam above the piece and do the scaling of the video. That way you don’t have to take a picture with your phone and upload it.

I don’t think there is any work on this yet.

It’s an interesting idea, but I think it’s more work than just moving the home
to cut or fastening the pieces of scrap in the center.

I could do it all manually… measure out the dimensions of what I want to cut and mark a home spot on the board and then move the router there. but if the piece is complicated or if I’m trying to fit it in by rotating it, then it gets difficult to figure out exactly where I could fit it in. Something like this mashup: 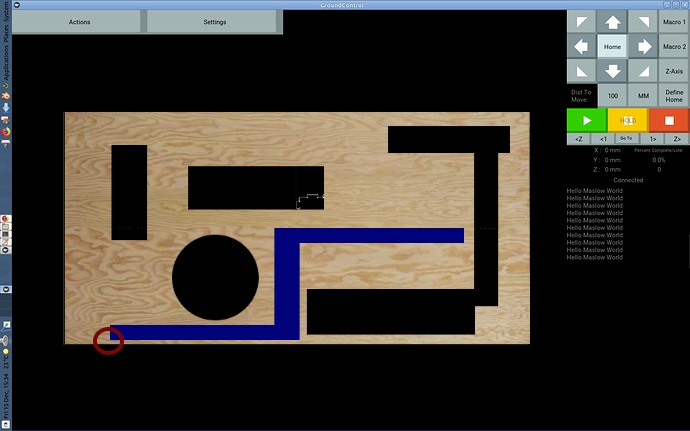 I made the piece to cut blue and the red circle is the home (just to illustrate my point).
If I took a photo of each piece of plywood at the end and could do an affine transformation to map it to the frame (right now, its a set of dashed lines), then I could easily move the home piece to where it would fit without a bunch of measurements.

This is exactly what I was trying to avoid - doing it manually. Am I wrong in thinking I could make a master dxf with all my shapes on it. I could then add more shapes to it after a cut, place it exactly where I want it, then reimport the dxf and make the gcode for only the new geometry? Then the zero zero wouldn’t change or need to be adjusted. It would be the same as the original.

I understand the desire to have the software handle this. However you seem to want to define 1 home position and move around it. Why are you so tied to not redefining home? In theory you are best off moving the work to the center of the Maslow. This could be challenging in the example @madgrizzle provided. There are multiple answers to this and I don’t think 1 is specifically correct. Some will provide better accuracy with the current software.

That desktop looks familiar, took me 5 seconds to understand

Why are you so tied to not redefining home?

I’m not opposed to moving home around just thought not having to would be easier. Again, I’ve never cut anything on a CNC before so I don’t know what’s best. The example @madgrizzle provided was exactly what I was thinking and could be challenging fitting anything more on there by hand. Maybe I’m trying to squeeze too much out of every board or maybe it’s not that big of a deal. I guess I’ll find out when I start my first cuts. I’m excited and still have a lot to learn.

Showed me this today at ADX -

This guy makes Sphers by hand from all scraps. Awesome stuff I want to learn to do this with my scraps.

I understand your dilemma - I think I could do an entire tutorial on use of scraps.

You’re on the right track. With CNC you get two options move the machine around the work or the work around the machine. One is usually less practical.

It is an interesting Feature Request.
Start be defining the workflow for the feature, example something like:

As for my workflow (FreeCAD), I would just double data that is already available for me.
Since CAD and CAM work on the same X/Y plane with a defined coordinate system, I have the ply-sheets as a plane for new designs. In CAD I can reposition, mirror and rotate designs to get the best fit on the sheet.
Just my preference as it seems faster to me.

Our high school has a weekly adult woodshop where there’s normally 3 or 4 full trash cans of northern hardwood scrap (ash, oak, hard/soft maple, cherry, birch, etc) from the school kids. I use it for a number of small projects including gluing up a lot of blanks for turning or bandsawing.

If you have access to a table saw or similar you could try edge gluing some of your scrap into bigger pieces. I found a Wolfcraft biscuit cutter relatively cheap and added a Horror Fright hand grinder (think it was like $15 15 years ago, good enough for wood). Not a Freud, but works well and would be good for something like this

Does it work well? I don’t have a use for it that often, but i would like a biscuit jointer in my shop. My main concern is that it looks like it actively wants to kill you when you turn it on. Found only 1 youtube film about it and that looked kinda safe. But is it accurate?

Good enough for a biscuit cutter. I only use it a time or two a year but it, so far, always works. It you screw down the depth setter it doesn’t move so if you always index from the same side (tested that, doesn’t move if you switch sides but doesn’t look as good…) then the biscuits are always the same depth. Mine must be at least 20 years old. I found several on eBay for about $30US (Wolfcraft 2932), Amazon search appears to be broken (???) right now

i would like a biscuit jointer in my shop.