School Project - Map of the Country of "Alphahawk"

This is my cousin’s 11 year old son’s school project for “Alphahawk”. The project was to design and create a map, including things like scale, symbols, legend, label, lat/long lines, compass rose and other such features.

Bonus credit was apparently awarded for creative use of materials, I’ll report back when I hear what he got for a grade on it.

From the Maslow-learning perspective: Our machine hasn’t even been run through the “calibration” yet, because we are trying to figure out the chain guides and tensioners before putting the sled into top corners. This was a piece of plywood screwed into our spoilboard. I did experience one problem with the sled lifting, due to the chain not being quite parallel to the work surface. Luckily we were watching it in real time and applied pressure to the sled, and remedied the situation by sliding thin blocks under the front two legs. This increased our lean angle from roughly 10 degrees to about 12, and there were no more issues.

The design is rudimentary on purpose, it wasn’t supposed to be for me to refine or spend a lot of time on. I just drew the shapes and added Easel clip art. Something I noticed was that the words had to be quite large before Easel displayed them properly on the simulation, even with the 1/8" router bit we were using. Same with some of the symbols, they needed to be a certain size before Easel was happy with them.

The hawk for Hawk Lake was also a hack job by me, it had a lot of feather lines and stuff I tried to delete in an amateurish way to achieve some semblance of an outline for the “lake”.

I was impressed with how straight and well the Maslow cut the long lines and border.

Overall, this cut took roughly SEVEN HOURS total time of the router running. This was what spurred me to look into the g-code optimization programs, because I noticed how inefficiently the sled was moving about the sheet. At one time, some of the letters in “Alphahawk” were barely carved while others appeared completed… I thought this was a missed sled-lift error. However when it was finally done, I was pleased to see each letter looked perfectly carved in both shape and depth. Why the machine insisted on doing a pass of the letter “A” and then leaving the word completely to go do something else entirely is a mystery.

ALSO an interesting phenomenon that I have pictures of if anyone cares: The word “Alphahawk” appeared to fade from deep to barely cut, starting with the k being deep and slowly graduating to the A being barely touched on the other end of the word. We noticed this about mid run through the entire cut. I have no idea what caused it and we were looking at the wood as if it had warped or something, assuming the Maslow had done what it was supposed to do but the wood bent away from the bit or something in that area (unlikely, it wasn’t a large sheet really and we screwed it well to the spoilboard). Oh well, in the end it turned out pretty good and the 11 year old was HAPPY as could be. He really enjoyed running back and forth from the computer to the router and watching the crosshairs move across his design, while turning around and seeing the router make it a reality. His dad (my buddy) and I were watching too and he was constantly making sure dad and I didn’t get near the computer or router as I had told him about the dangers of bumping it or accidentally unplugging something.

(This is my first time uploading photos so hopefully it works). 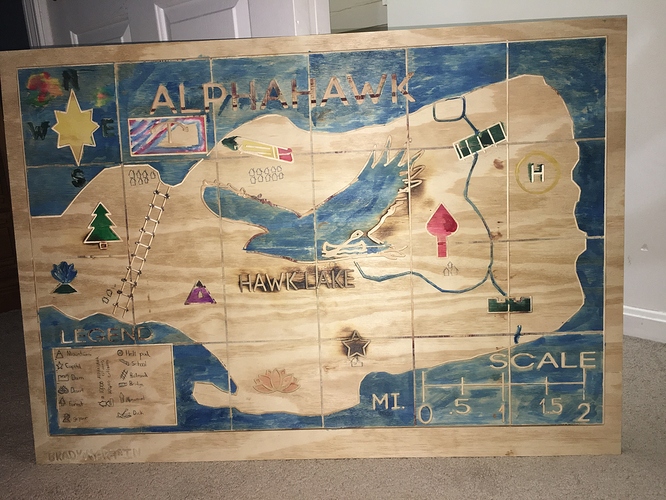 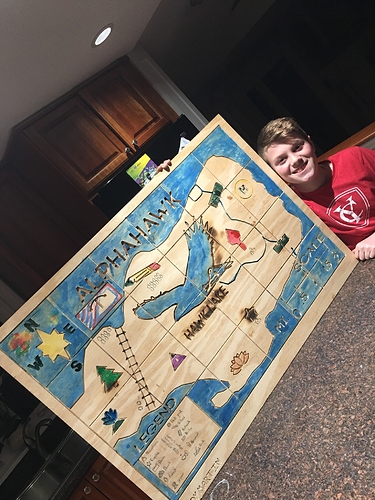 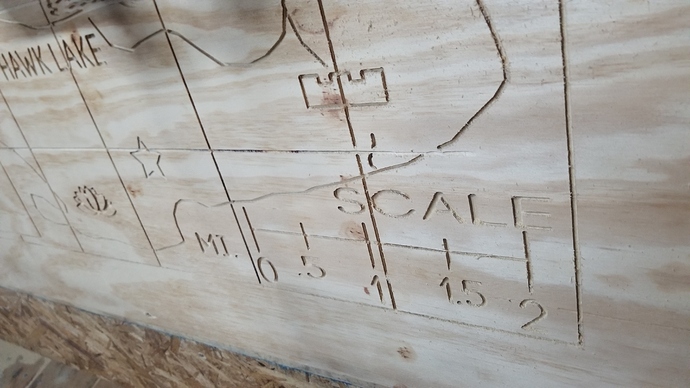 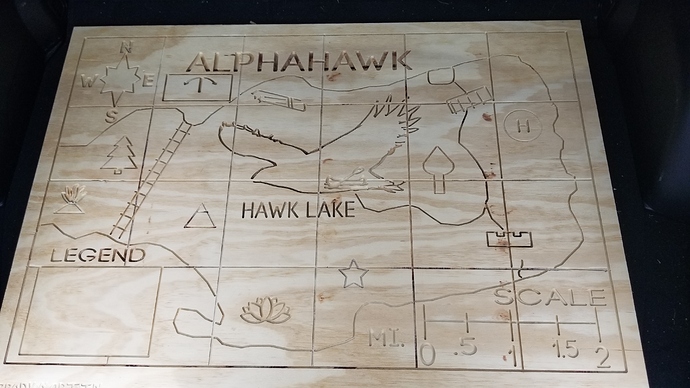 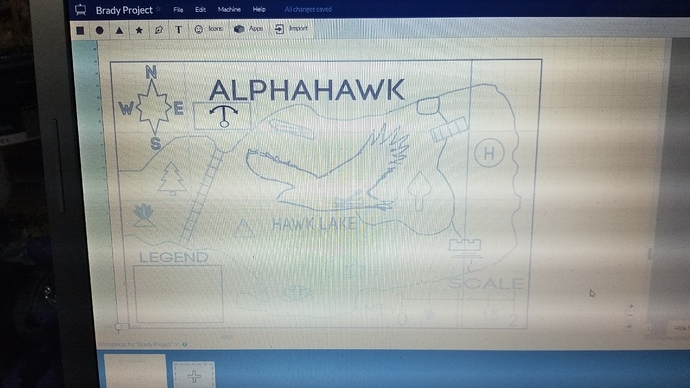 Whoa, that is awesome

The “pencil” symbol for “school” above Hawk Lake is also a little off… but as you can see in the Easel design it cut it exactly how it appeared. I went to adjust it and accidentally didn’t select the tip of the pencil which messed up the design a little. When he colored it, it was more obvious what the symbol was.

Another thing to note is the upside down anchor (“flag”) shows the circular portion at the bottom of the anchor in the design, but it did not appear in the carving at all. It may not have displayed on the simulation and I missed that as well, making the anchor bigger (not possible in this instance) would have resulted in the proper carving of the whole anchor.

Did you not cut the legend because the 1/8 bit was too big for the letters? I have never used a vcarve bit but would that be useful for smaller designs?

Love the young man’s smile! Gets my vote for project of the week!

Yup exactly, some of the symbols were as small as I could make them already with the 1/8 bit.

I could possibly have tried to do a bit change (honestly given unlimited time and effort to expend I would’ve started with the 1/4 and done a change to a 1/8 and a change to a 1/16 in progressively increasing detail. Probably would’ve cut down on cutting time too, but this was a time crunch thing and I really didn’t want to ruin the only piece of suitable plywood on hand.

What was really cool to me about this project was how quickly and easily Maslow was able to make it happen. From the time the dad told me about it (and their plan to do it all with woodburner) to the finished cut product was very short. Easel is simple but so am I, and that helped.