When I saw the Maslow online, my first thought was, I need to make maps! I’m glad the process has finally come together and I’ve now completed a few! I currently have only cut Austin and a small town that I grew up in, in Illinois. They are 28" tall and 24" wide. I epoxy filled the cut areas then run it through my drum sander to flatten it out. So far I have cut them into cherry and walnut. Since I was doing roads, it is very Z-axis heavy as it raises and lowers at the start/end of each road, so i bought a new motor which turned out to be quite the project, but it is much faster than the stock Z axis once everything was working correctly. I actually do it in two separate cuts, one with a 1/8" bit and another with a 1/16" bit. I also carved out a spot on the back of the map so that the map can be hung flush against the wall. Thanks for looking!! 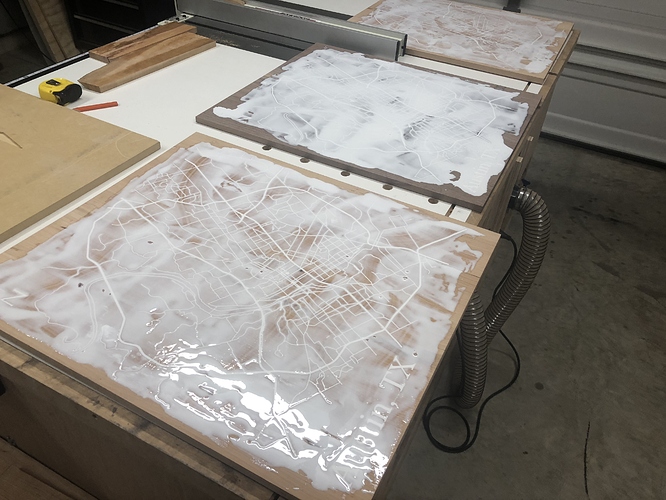 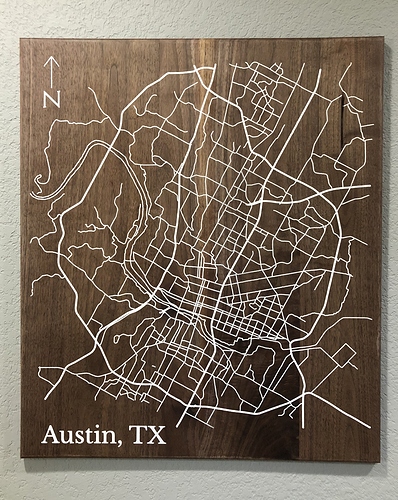 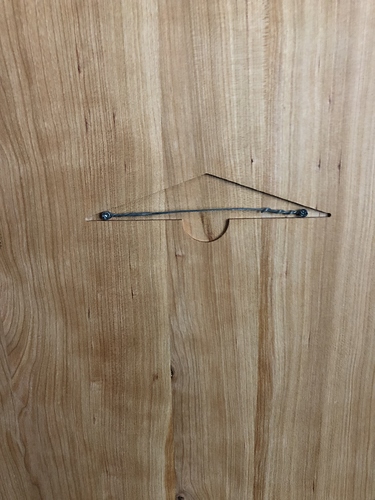 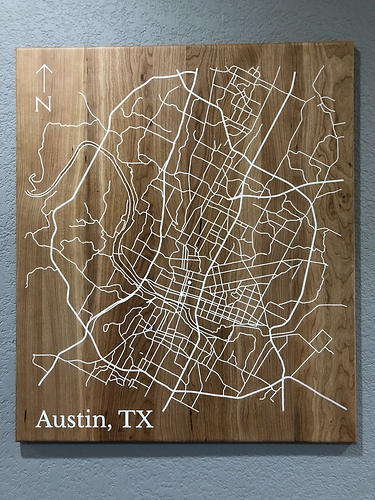 These are stunning!!! Wow.

I have seen people use laser cutters to do maps, but the way you us natural wood with a white epoxy to make the roads really pop is amazing and unlike anything I’ve seen before. Phenomenal!

i bought a new motor which turned out to be quite the project, but it is much faster than the stock Z axis

@bar is this on the list of possible future improvements? I’ve seen a few times in the forums that the z-axis is a little slow.

I’m pretty sure that he’s already ordered all the motors for this set of kits,
but the motor family documentation has been posted, so you can pick a different
one. This thread is a good one to see an example of a different motor working
well.

Yes! I chose the motor I did because I wanted to make sure it was powerful enough for every router, but I think we could get more speed and still be powerful enough to run every router. Unfortunately the motors are the thing which takes the longest and we JUST got a batch in so it might be a while on our end. The ebay motor will be quicker

This is amazing! Great work!

This is outstanding work!

I would love to make something like this. My first couple projects have been practice automotive logos. A VW and a Ford logo.
I have to say I haven’t yet grown tired of sitting there watching just watching the machine cut.
Fantastic project!

Impressive, that’s getting down there in bit size! Fun to see what the Maslow is capable of. I was curious what your set up was and found this post (Getting My Maslow Calibrated). Looks like you have a linkage kit with a top beam design frame.

How deep were your cuts?

As a total map nerd, I approve. Fantastic execution!

What kind of drum sander do you use?

@Jayster The cuts are 0.15" deep, @TheRiflesSpiral I have a Performax 16/32 drum sander that I found on craigslist

Nice sander. I’m not completely sold on those open-end variants yet but if I were going that way, the Performax is the one I’d seek out.

It has a lot of adjustment to get it perfectly level, Its the only drum sander I’ve used so I don’t have any real experience with anything bigger with a closed drum end. Also I found it on Craigslist for $100 so that was the number one selling point for me!

The one I have the most experience with is a dual-drum Grizzly. It’s challenging enough to get the table (the belt, really) parallel to the drums in that machine… one end hanging out there doesn’t instill me with a lot of confidence.

I’m sure they’re fine and perfectly suited to the job they do… I’m just a bit of a hard-headed Dutchman.

How did you generate the actual map line drawing?

I bought cad files of the cities online and then spent many hours combing through all the lines for the designated surface streets and interstates.

Do you plan on doing Huston?