The “jog controls” for left and right motors. Can we also duplicate this for the Z axis?

Two drivers behind this:

the z axis jog buttons in webcontrol are in the z axis menu.

With almost all machines now having a Z-axis it would make more sense to set/wiggle the the Z motor earlier in the setup process.

Thanks Orob, Yes, I had found the Z-axis move and used it in the description above. But this is moving the Z motor after you have set a calibration number for it. (Actually I guess we all set a small number, measure the movemement and then scale. But by this time it is late in the day and we have spent an hour on a forum trying to find the button)

Personally I’d move the Z-calibration number input to just below this as well. 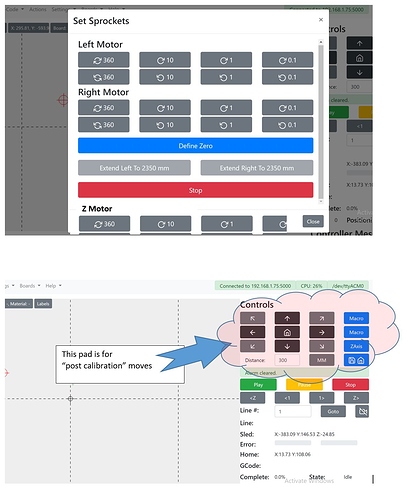 Oh, I see what you are asking for. Typically the z axis is not “calibrated” like the chains and you extend the chains and set the sprockets with the sled not attached, which means the z axis at this stage may not even be connected. Once you get the sled on, then you use the regular “post” calibration moves. Setting the z axis is done routinely after tool/bit changes, so it would need to be done often and not buried in the calibration menu. Intuitively, the z axis zero isn’t critical until the chains are ready: definitely before the calibration cuts, but after the chain extension. I would not advocate for a z axis movement button on the set-sprocket page. If you need to move it, do that before you go to the set sprocket page or after.

The above is what I’ve seen comming cold to the software and the kit. I’m aware that those with running machines would probably not get it.

I used the Z commands to adjust and set the Z home too. They are nicely and logically in mm. There is no request to change these. I’ve not got as far as a bit change yet.

The feature you seek is redundant, but the way it is situated does not appear intuitive to a new user. You are asking for a z setup menu or buttons for checking the z axis in a location that a new user would be more likely to find it earlier in the setup process?

I think having jog up/down buttons would be less useful than a shortcut that moves the bit to zero and one that moves it to a predefined travel height.

At least those are the two heights I use the most.