I’m interested in making some flat pack furniture myself but it would be cool to see workflows for engraving and anything else you’re making!

This is a great question. I think there are several guides to workflows in the wiki section of the forum that would be worth while. I wrote one of those on using inkscape. I use coreldraw sometimes to make svgs or I use inkscape. Then I use inkscape to generate gcode. I’ve been looking at easel for gcode generation because the inkscape extension is very time consuming to do well, but haven’t switched yet because it is easier to trust what i know. If I move to easel, I would use coreldraw and then easel. I’ve been wanting to learn freecad and blender to do the full design -> gcode, but freecad keeps crashing and I’ve been doing other things.

I want to try Easel and also Fusion 360 but unfortunately Fusion is a bit more than my PC can handle.

For me it’s the most difficult part of the process. I wish there were a place where we could download gcode for Maslow.

I think the key is to be aware of what is fundamental, and what is not. The fundamentals won’t change, and the software is just a tool for dealing with the fundamentals in a convenient way. Then, you choose the tool that works best for you.

So, fundamentally, the target is G-code. Maslow understands a specific set of G-code commands to move the cutter around the workpiece. You can read about them here:

If you send an unrecognised code then Maslow will ignore it. If you want to do something that can not be expressed in G-code then Maslow can’t do it. At its simplest level, G-code allows you to instruct the machine to set the cutting height of the tool (Z) and move to a certain X-Y point. If the tool is above the surface of the workpiece then no cutting is done. If the tool is below the surface of the workpiece then it will cut the material. That’s it.

This leads on to physical considerations: what material is it? how deep can you cut while moving the tool? how fast can the tool move? G-code doesn’t care about this, but these factors must be accounted for when producing the G-code itself. The machine executes the G-code as best it can, but it has no way to know what material is actually present, or what tool has actually been installed, or where the edge of the material is, or how thick it actually is. The machine is blind and does what it is told to do.

So, how to produce the G-code? Well, as you can see, it’s a sequence of commands. You could write it in a text editor. If it’s a simple shape, such as a square, you could write a series of G-code commands to lift the Z axis (so the machine won’t cut), move to the start X-Y position, lower the Z axis (so the machine will cut), move to the first corner, second corner, third corner, and back to the start, then lift the Z-axis again. Remember, when you specify the X-Y positions to add or subtract half of the diameter of the cutting tool so that the edge of the cutter is on the line that you want to cut. Obviously the file is no good if you want to use a different size tool, so you’d have to regenerate the G-code with new numbers.

Doing it by hand is tedious (but a worthwhile exercise), and probably you’ll have a fairly complex shape, so you’d use a CAD (Computer Aided Design) tool. This lets you draw what you want, and you’ll end up with a bunch of elements that need to be cut. You need a CAM (Computer Aided Manufacturing) tool to take the graphic elements in the CAD drawing and produce G-code to drive the machine. The CAM tool lets you specify parameters like speed of movement, tool sizes, cutting heights/depths, inside/outside/centre cuts, and allows you to produce a G-code file for that design for that machine and that tool. The same file may work on another machine, but it might not. It also won’t produce the desired result if you don’t set up the machine properly when you start the job.

For me, I generally use QCad for CAD, and DXF2GCODE for CAM. So, that’s two separate programs. Some CAD programs have CAM built-in, so you can produce G-code directly.

When you produce G-code you generally have to specify the machine that you are going to use. This makes the CAM software use only G-code commands that the machine is known to support, and avoid the ones it doesn’t. If ‘Maslow’ is not listed in your CAM software (and it probably won’t be) then try ‘grbl’. After you have produced the G-code you can look at the file and verify that it contains only commands that Maslow supports, and that the sequence of commands looks sensible. You can also run the G-code on a simulator, that will visually show the cutting paths contained in the file.

Even if there was a place where you could download G-code for Maslow I’d suggest you couldn’t trust it. You’d have to double-check the cutting area, tool size, feed speed, inches/mm, etc. G-code is the worst way to distribute a design.

Because Internet connectivity where I live isn’t always …

I’ve gone with the following:

I also wrote my own GCode ‘cleaning’ software. Which has an option to annotate each line in the GCode to explain what it does.

I primarily make furniture with my Maslow. I use Fusion360 for everything. My process is as follows: 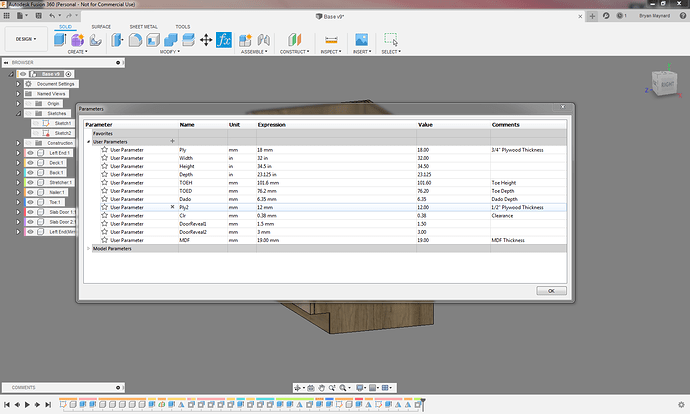 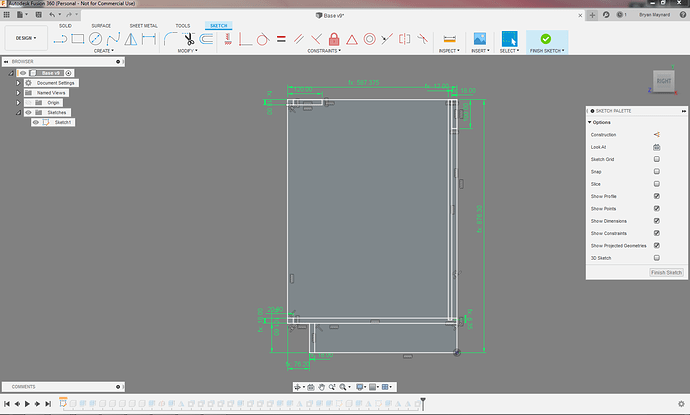 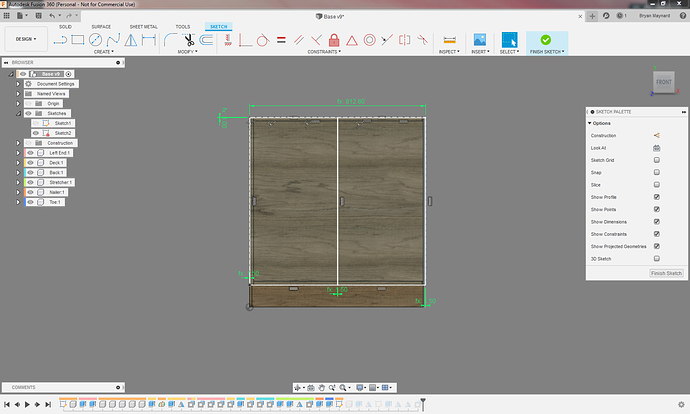 Slightly different cabinet, but based on the same section. I just made an entry hole for my cats: 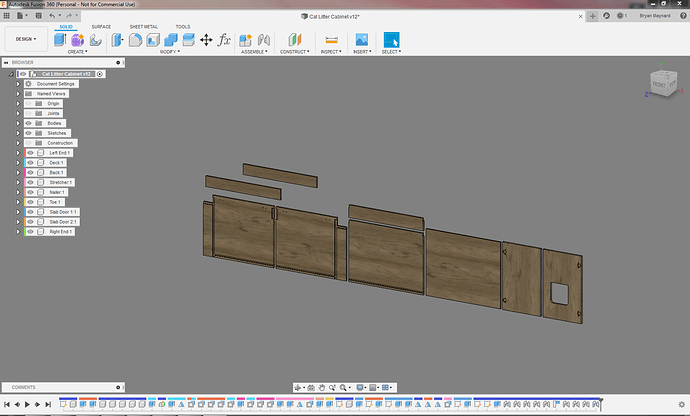 I do go into more detail with toolpath settings in this post: Fusion 360 confusion - #9 by MeticulousMaynard

Cabinet side programmed, you can see all the other setups for each piece of plywood I’ll be running: 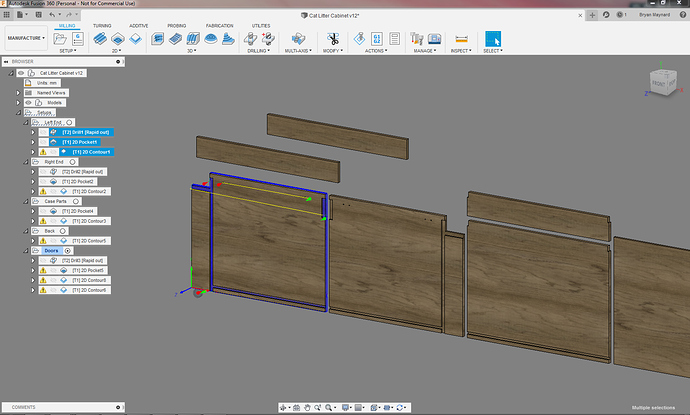 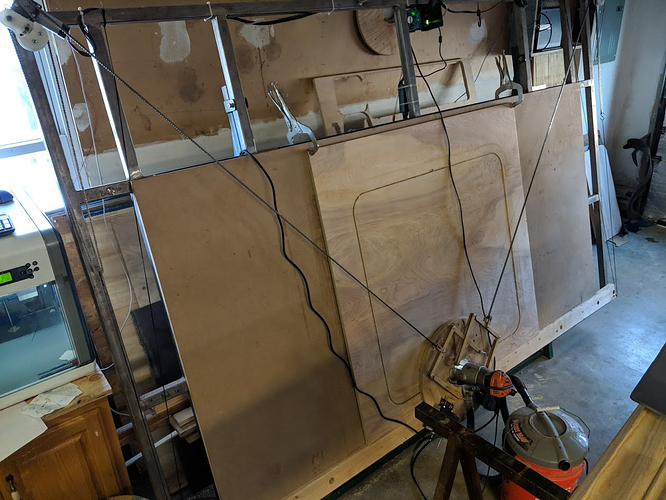 Sanded and oiled cabinet parts for my kitchen (Doors thrifted, not Maslow’d): 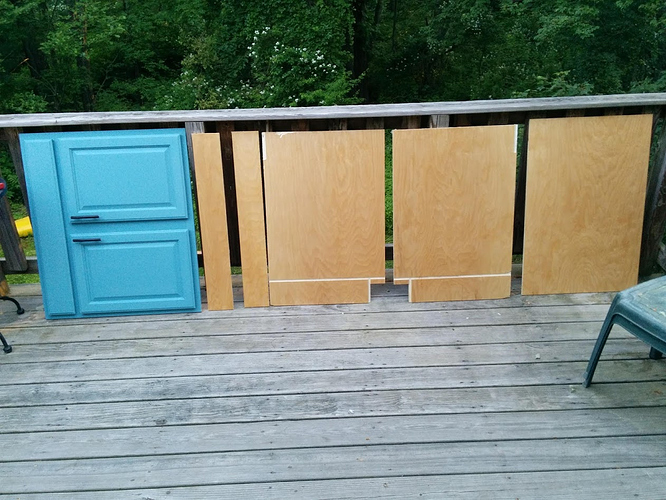 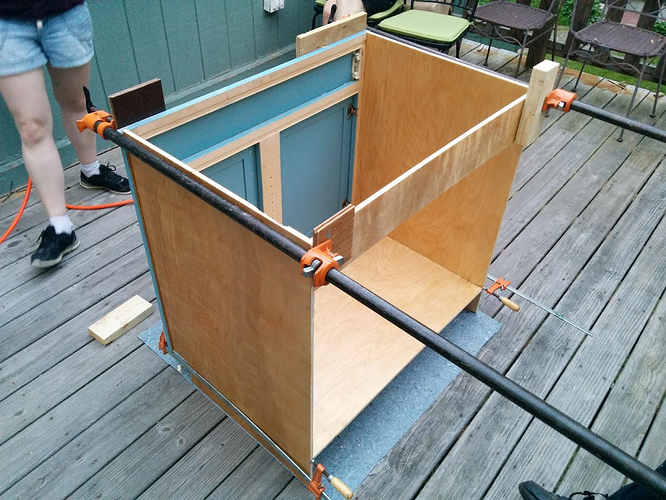 From there, you would install the cabinet. Hopefully this isn’t just a wall of text to readers. I wanted to be detailed enough but also be concise. It’s a hard balance to strike. Sorry for jumping around on these pictures so much, I haven’t documented my entire workflow on just one job, so I had to pull from a few similar ones.

Thanks for the screenshots. Very helpful.

I have parts on order to upgrade my PC Memory and Video Card so it can support fusion 3D.

Do you share your furniture designs anywhere? I’ve just moved for work and invested in the Maslow so I could build new furniture. I couldn’t afford to bring my old stuff w/ us.

The best place to find designs from the forum is on http://maslowcommunitygarden.org/. There are a few of my designs on there, they’re complete projects I have done. Anything else I have isn’t really something I could just hand off and feel comfortable that everything will fit up at the end of the day.

There are tons of tutorials on YouTube, though, and with some practice it is fairly easy to make your ideas come to life. Even with my level familiarity with it, I search “Fusion 360 [feature i’m trying to figure out]” all the time.

I don’t have my Maslow assembled yet but for my little 3040 CNC I use Kiri:Moto( https://www.thingiverse.com/apps/kirimoto ) to generate gcode / tool paths and use CNCjs to drive the machine.

Model design used to be OpenSCAD but I recently got Fusion360 running under WINE so have been learning that and have been quite pleased. OnShape is another option I’ve not looked into but once I’m better at GUI CAD, I’ll show how that does since I’ve seen many use OnShape and Kiri:Moto has a plugin for it.

@MeticulousMaynard
Great post! Thank you for the detail. I really like Fusion 360 and was hoping to find a post like yours. In step 5, you mentioned using the Maslow post processor to get great results. Could you explain this a bit more? I was able to draw and generate Gcode from fusion but the file does not pop up in ground control. I think, your strategy could help me here. Thanks

An easy and good workflow, especially for a beginner and for engraving… I would use Adobe Illustrator, and then Makercam. (Use Adobe illustrator to get an SVG file and then upload that SVG file into Makercam to get the gcode.)

Makercam is written in flash which is now dead dead dead and gone to the happy software retirement land. I haven’t tried krabzcam but it says it’s essentially makercam rewritten in javascript and has had good comments.

Everything keeps getting older. I’m waiting for a time reversal ray but it hasn’t hit Kickstarter yet

any MC alternatives? CAM softwares that are easy to use and good for simple profiles?

Rim .svg file to gcode, you can use Estlcam, carbide create, kiri:moto, jscut to name a few.

I am simple. I use inkscape to design stuff, Easel to define rules for the GCode and export the GCode to file, and upload the GCode files to WebControl for cutting.

cool, sounds like I need to learn easel then.