I would expect that bike chain would be cheaper due to being produced in larger quantities, and it should be possible to get small sprockets that fit the #40 chain.

Was there a specific reason to go smaller? (am I mistaken in my beliefs above for example) Or was it just a matter of going from the much heavier, multi-width chain you went to the smallest chain available?

It offers the most resolution and still offers the strength of a chain. It’s 2x’s the resolution you would get with a standard #40 bicycle chain.

I keep coming back to it would have more resolution with cable not chain. Though this creates a new issue of having to have a spindle long enough and tall enough to accommodate enough cable for full range of motion and attach to the motors. Would need to be custom made.

how does the size of the links affect the resolution? you aren’t moving the
chain one link at a time, you are rotating the sprocket a small amount and
paying out part of a link.

yes, how the link comes off the sprocket is affected by the size of the link,
but how much of a difference does that make?

But I’m sure you’ll still doubt me. As you have a couple of times until someone else said the same thing. You’ve also shot down two suggestions that you then praised when someone else suggested it. So here’s a screen shot that says pretty much what I said. 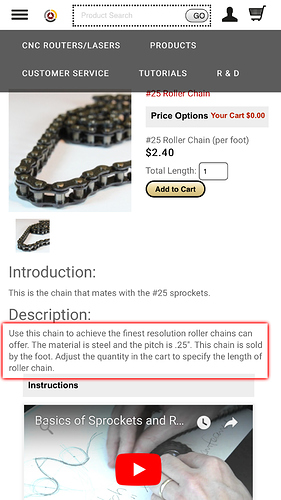 Here’s the link to that page https://buildyourcnc.com/Item/mechanical-roller-chains-ANSI25-sprocchn

And if I find it again I’ll link the video where a guy goes into detail about it, but I watched that video a few years ago.

If it appears that I have been picking on you, my apologies, that is not the
case (I usually don’t pay attention to who says something when I respond)