Hi,
Been a long time since I was active on this forum, but it’s fabulous to come back after a year and have shiny new software to use! It’s awesome! Big thanks to the developers of WebControl.

Here’s my issue -
I’ve updated my original shield to run holey v51.28 and use aPi3b+ running WebControl 0.94 to drive it with a sled based on the meticulous Z-axis (8mm/rev screw w/ 1:1 ratio belt drive). The machine is much more accurate than my last runs in 2018, 2-3mm off over 80" and repeatability within a handful of thou (whisps of dust) when re-running text engraving gcode. Mechanically I’m quite happy with it.
However, there seems to be some instructions that aren’t executing in a run I was trying today. Here’s the segment of gcode:

It moves fine up till G1 Z-0.020 but it doesn’t enter the wood at this point. It just “air cuts” or barely skims the board depending on how the Z axis is zeroed. It just isn’t making this move. I’ve verified by gluing an indicator and mm scale on the axis carriage and there is just no movement, it goes up to Z0.2197 fine, and back to Z0.1, but won’t make this move.
I do have code that works:

If the Z move is duplicated with a G0 move, it runs fine. Why is it getting ignored?
At his point I’m leaning towards a speed issue - the Z move hasn’t completed before it starts the G1 X2.6143 Y3.9275.

This is a fusion 360 trace operation.
I’m thinking I’ll try makerverse 1.1.2 tomorrow to see if the same issue occurs there. (Had it installed earlier this week but i gave up because it was throwing all kinds of buffer overflow errors and giving weird speed responses to G2/G3 moves).

Thank you for any insight … 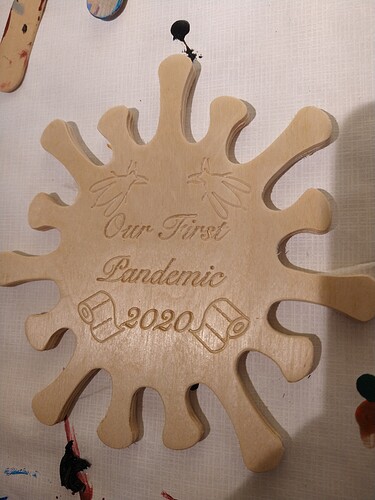 I’m not sure if this would work, but you might add an F value after that line? I only have the basic Z axis, so my feed rate is much slower, but when I’ve worked through Easel, it adds a F9.0 to all of the G1 Z moves. My thought is that it’s not seeing what the feed rate should be since G1 is a “production” line and so it’s not making that move.

0.02 inches is very small (half a mm), it’s not surprising that that’s not
noticable. It doesn’t take much of an error in positioning of Z=0 to make that
an air cut.

Also, the comment about zmin being-0.025 bothers me. check your fusion 360,
where is Z=0? is it the bottom of the material or the top? for the maslow, Z=0
is the top of the material and you need to adjust things in fusion to make this
work. fusion has a ay to visualize the cutting, run that and check that it’s
cutting into the material rather than in the air.

Thanks for the suggestions. My zero for z is the top of the model (also corresponds to top of stock) in fusion. I will double check the z direction. This is set with the axial offset in the trace operation dialogue. I remember thinking it’s wierd that I have to enter a negative offset, by that’s what it wanted to get the toolpath in the stock as opposed to floating above it as verified in the simulation.

These are small moves, but it’s doing a nice job. I’ll post a photo of the project. For reference, the text “Pandemic” is 10mm high and about 55mm wide.

I’ll try setting the feed slower for the z move. I cannedi the code manually, but it would be nice to figure out where to change it in fusion. Probably the lead-in huh?

as far as the maslow is concerned, zmin is just comment text, it doesn’t mean
anything

but it’s an indicaation of what fusion thinks is going on, and a zbmin cloe to
zero is not correct (no matterwhich direction of Z is positive).

only cutting 0.02" or 0.035in into the material is only going to be barely
detectable, and only if the Z=0 is exactly at the surface of the material (both
are < 1mm of depth) are you really intending to only (literally) scratch the
surface?

Yes, it is a shallow cut, see the text & graphics engraving on the photo I added. This is actually the code for the righthand bug. Initially I though I had set my zero too high, except that it cuts the left hand bug fine, but then doesn’t plunge as deep when it moves over to the right hand one and they have the same z position in the code.