I have modified the sled with my Z Axis control and a sled ring. The problem I am having is the sled tilts down in the direction that it is moving… The ring is . 1/4" steel which I formed around a 12" circle which .was cut out with the Maslow. The bearing are good quality V groove bearings and move very smoothly on the ring. I have tried different positions for the bricks and the base of the sled has strips of UHMW tape so there is very little friction, so I don’t think friction is a problem. I also removed the router and the Z axis assembly so the sled had nothing but the bricks on it, but the sled still tilts down in the direction it is moving.
I am including several pics of the sled showing the tilt. Would appreciate any suggestions. 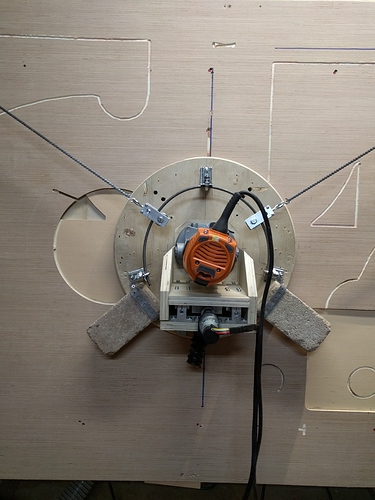 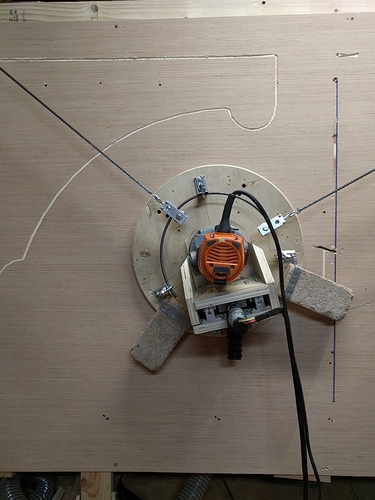 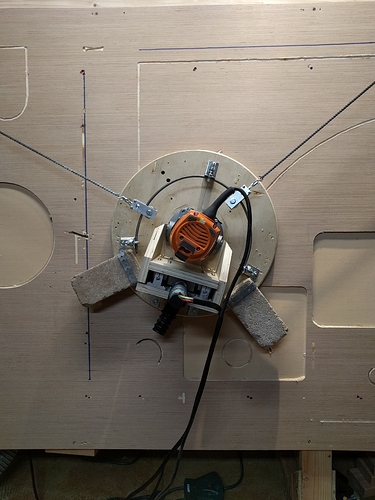 I think the tilting of the sled is normal. Since it rotates around the router bit, it shouldn’t cause any inaccuracy. My sled using @pillagethenburn’s linkage kit tilts like you show.

Thanks for the info. I was concerned that the tilt would cause inaccuracy. Will moving the position of the bricks and adding additional weights on the sled improve on the tilt.

Maybe it’s an optical illusion but your ring doesn’t look circular at all. It looks like it has a large bulge on the left and it’s more flat on the right.

Will moving the position of the bricks and adding additional weights on the sled improve on the tilt.

Not sure, but I still wouldn’t worry about it. Tilting is not a bad thing as long as it’s a rotation around the center of the bit and that’s a function of the where the ring is installed (is it perfectly centered on the bit) and the circularity of the ring…

It’s not a perfect circle, A little flat on the sides because I had trouble forming it to the plywood form. Is that a problem?

It’s not a perfect circle, A little flat on the sides because I had trouble forming it to the plywood form. Is that a problem?

That’s very much a problem. You’re accuracy will suffer from it.

I will look closely at the centering of the bit… Thanks.

I would think that if you’re not dead on with your ring the sled will tilt to a natural spot as it rides on high or low spots in your ring. That’s not to mention while it’s doing that it’s shifting your bit around and is not keeping it dead center.

I will make another circle. Thinking about 1/4" aluminum rod which I can form more easier.

Also make sure what you are forming the ring around is also perfectly circular. You said the 12-inch circle was cut from the Maslow and if the Maslow was inaccurate in making your cut, then the resultant ring will be inaccurate. You might want to try a jig to manually cut out a circle using your router.

Thanks, I will do that with my router and circle jig.

FWIW, with the Maslow supplied ring, stock sled with waxed base, and sanding the business edge of the ring, my machine stays pretty upright wherever it travels. This is a good thing, because centering the spindle is pretty challenging… I would love discover a foolproof method for doing this. It is pretty easy to test whether the spindle is centered with a ring system… with the machine not moving, turn on the router, drop the z axis to -.1", and rotate the sled. If the spindle is centered, there will be no movement, and the cut will stay the size of your bit. Otherwise, you will get a larger hole or a C shape. As I said, easy to check. But not so easy to fix… Not much is easily adjustable, especially small amounts, with wood screws in plywood.

Thanks for the tip for checking on the spindle centering. I have built a
new sled and very carefully laid out the spindle center with the ring. I
also formed a new ring which is a better circle. I checked the spindle
centering using the procedure you mentioned. The hole is very close side to
side, but is a little elongated top to bottom, about .04 inches. I have an
idea on what is causing this and will be checking it out.

While aluminum is going to be easier for you to bend keep in mind that it will also be easier for Maslow to bend it. There are some pretty big forces in the chains (and ring) when the sled is high on the workpiece.
Even if it doesn’t stay bent having a ring that goes out of round in certain places on the board will be just as bad.

I have replaced the alum. ring with a steel ring that I found. I was also worried about the alum.

if it tilts in different directions depending on what direction you are moving, that probably means the router bit isn’t centered in the ring