I was kinda amused at the dot one degree increments on the sprocket alignment window, I mean how could you tell? But it got me thinking about how to vertically align the sprockets as during the calibration you need to do that step once for the right and twice for the left motor.

I used the chain and a cotter pin to align the sprocket. I draped the chain with the half way link over the top tooth. Then I pinned the open ends with the cotter pin. Using the adjustments until both legs were even I feel that I got a better alignment than my previous methods, spirit level and speed square. Sorry about the fuzzy image… 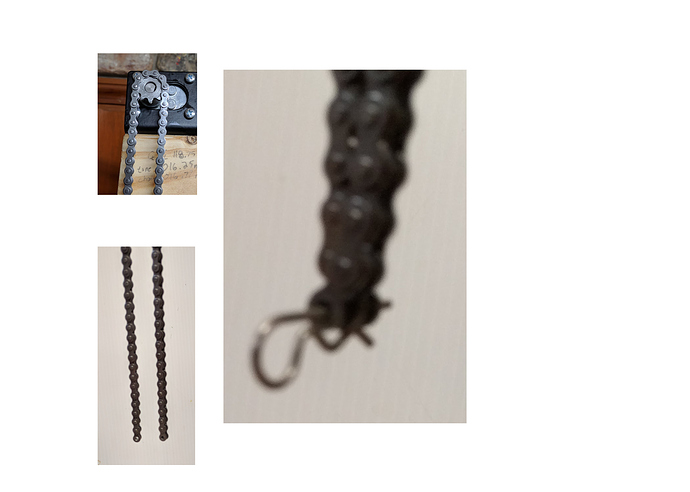 That is an awesome idea! Way to use the tools we all have available!

This is an excellent idea/method!

One question. Is there any backlash caused by how tightly the chain meshes with the gear. Would it make sense to weight the feed side of the chain to ensure this backlash is set on the correct side?

Good question… I’d like to know this as well.

How about placing a level between the two end links and let it float? You should be able to get the bubble nice and centered as long as you made sure the same hardware is used at each end of the level. I agree that this is an awesome way to set the 12 o’clock position.

The same hardware is used at each end of the level.

Your idea is a great one! Here’s my cut at it - a string level and a piece of coat-hanger wire: 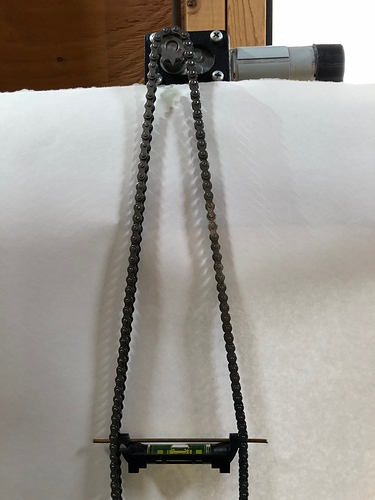 On my frame, the chain rubs on the top beam, though. Have to think about overcoming that…

It’s kind of fun poking the buttons and making the bubble move. I never believed that the 0.1 degree buttons did much, but they truly do.

Do you want the sprocket straight up in relation to the Earth or your frame? Ideally they are both the same. In the event your frame had a slight slope to it (sitting on the floor of a garage with a taper) you’d want to match that same slope so the dead center pointing up on the sprocket was in relation to the frame (and not level with the Earth). That make sense or am I way off?

I think it might actually be in relation to the earth…right? Because the math for where the chain intersects the sprocket is based off the idea that gravity is straight down…now I’ve got to think about this for a second

That’s quite an interesting question. It’s fairly important your frame isn’t tilted. Simple logic dictates that a frame at 90 degrees (i.e., on it’s side) isn’t going to work so any tilt off of perfectly level will have an impact. Now I have to go to my shed and check mine.

But we can rely on everyone’s favorite trig tool, the small angle approximation to say that as long as the angle is only a few degrees the effect shouldn’t be substantial

Perhaps the calibration needs the sprocket perpendicular to the top bar (motor to motor) but the chain sag calculation (and any other gravitational force affected aspect) needs it level to the Earth?

That is such a simple solution to the problem. I was ready to over-engineer it.

If you are trying to get the sprockets centered to 0.1 degrees, you should have the frame leveled to within 0.1 degrees. If the frame is off level, tipped to the right as an example, the angles would be off such that the left chain is a little short, and the right chain is a little long. I believe the machine should be leveled prior to doing this.

I believe I have this very problem! My frame is tilted clockwise probably by about a deg or two. I have a super rigid and dimensionally sound frame, but it sits on a sloping garage floor. I’m just about to add further structural support to make it freestanding (currently against a wall) and will use this moving opportunity to set the frame up level, and then I shall be using George M’s Cog Alignment Method (GMCAM) ;¬)

I bought a pair of the line levels on the web and neither of them were true! Admittedly they were cheap plastic tat, but utterly useless as delivered. Fortunately the glue used to tack the phail to the holder was also of poor grade and as such I was able to prise apart and reglue (yes, hot glue ;¬) in a truer position. Be warned of the cheap tat. I’ve had the same experience many times with framing/set squares, you ideally need to test before you buy.

Having used the GMCAM to align my cogs, I can advocate it’s use. Just be sure you have everything aligned in the right plane as you measure your level.