This is something every Maslow should have

I started adding safety features to my Maslow, though the wheels underneath take special care when moving it to get access to behind. 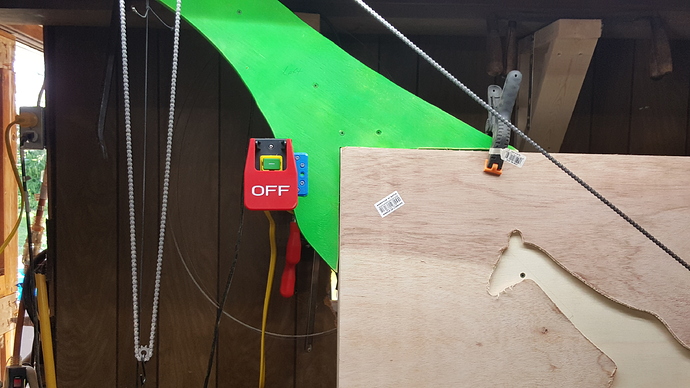 I have an “oh sh*t!” button wired in to outlets behind to kill the router and motors if something very bad happens.

I am also thinking a limit switch on the sled would be a good idea as well. So that if there is no surface contact, all power is killed.

how would you detect no contact with the sled?

A spring loaded limit switch would work. But can also be a catching hazard in itself. Not sure completely of a solution.

I spent some time thinking about this a few weeks back. I think you would need multiple switches, and some decision of how many switches have to open to indicate a limit. It all sounded too complicated for a safety mechanism to me.

Some sort of optical system that looks for the router inside a defined box would work well.

Or a magnet and a reed switch on the chains. This could prevent some limits, but not all.

That is the question. It should be mounted to the sled. But going over a cut would a) trigger the switch and b) get snagged in the recess.

I have not yet thought of a good solution yet.

I would probably put this in the “overkill” category but you could mount bump rails outside of the work area that are connected to microswitches. If the sled leaves the work and hits a bumper the system shuts down. The same could be done with beam-interrupt sensors (like the door chime at 7-11) where the sled breaks a horizontal or vertical beam if it travels too far.

If you wanted a physical switch on the sled, one could be made that doesn’t catch by using a wide, domed panel. Picture a shallow dome on a gentle switch. I’ll draw a picture…

This is not to scale but I think you get the idea. This design would even allow it to pass over gaps wider than the switch as long as the throw distance for the switch is more than the thickness of the material being cut. 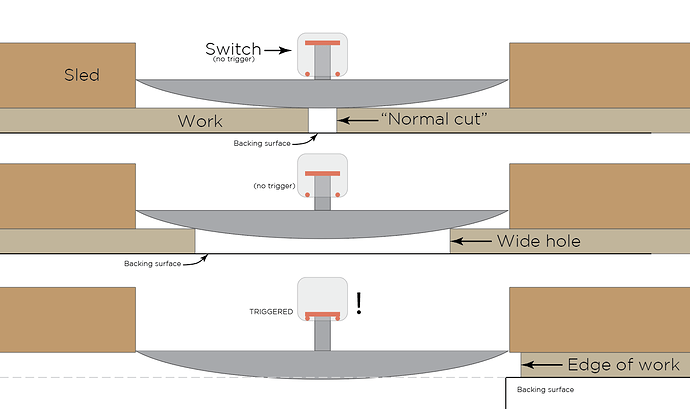 Unless you wanted multiple switches then this would be centered in the sled… My fear would be that the sled would tip once it’s center point fell off the edge.

If someone needed to implement this safety I think I’d go for the beam-break or bumpers personally… My initial thought was switches on the chains, but as @krkeegan mentioned that wouldn’t prevent all crashes. Even if you had two limits on each chain (an out-feed and in-feed limit) you’d either create large unusable corners that your sled could never reach or you’d have large crashable zones in the centers of the long edges.

That is darn close to the idea I had in my head. The sled would be two parts, bottom slide and the base. The bottom slide is what would be connected to the limit switch.

If the concern here is the sled coming off the work surface entirely then doesn’t GC already prevent this somewhat?

GC tries, but sometimes things go wrong (if chains slip, then things aren’t
where GC thinks they are)

But in addition, you can have bits break, or other unexpected things happen, so
having an e-stop on any power tool is a good idea

Another idea is a beam break around the work surface. You could use 4 beams or a single beam with mirrors.

I am not sure how good of an idea this is, just proposing options.

I would just use limit switches, on bumper bars around the outside of the frame.

remember that the sled will go up to 9 inches beyone the workpiece before you
want to stop.

Also, try building 8’ long bumper bars, I don’t think they will work as well as
you are thinking

What about the technology used for invisible dog fences? I only vaguely know how they work, but that might work too.

I also though about a simple light sensor at the 4 cardinal points in the sled facing down. It shouldn’t trip at cut lines but if the area behind the sled was lit up, it could work. Of course clogging could be an issue.

What about a multi axis accelerometer like they have in wii controllers. Piggy backed off the z-axis, before the sled starts to move, init the angle of the sled. If it moves out of tolerance (caught on a ledge, dangling in the air, chain breaks, hits ground and tips), or drops too quickly(chain skip) it can send a stop command to to the shield/arduino.

Complete Noob here and I’d imagine this would only work with going “too deep”…but, aren’t there relatively inexpensive setups (remember, complete noob here) where electrical charge comes into play?

Where upon a bit cutting into say, “the frames backing board”, a connection electrically is made and a kill switch is triggered?

Hope this is relevant all.