Trying to do too much? / Any ideas of limits of original mounting kit with standard attachment?

I’m attempting to cut a modified 90 minute chair (modified to fit on one sheet), and have not meet with much success yet. 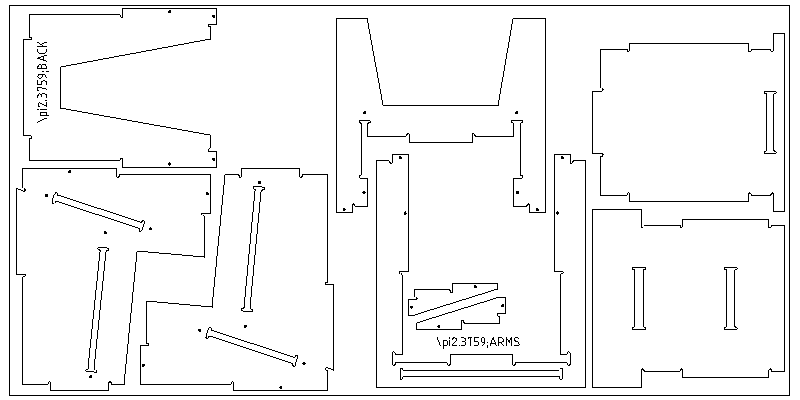 I cut the first side in the far lower left and had to hold the sled as it moved around to keep the chain tight so that it would be close to the shape (note the wild first couple of passes). Even though all of the slots are supposed to be 0.75", none of them are nor do they align from one side to the other (for the second side, I offset the sheet so that what would be cut would be in the center of the area). Any thoughts? To date, I have yet been able to walk away from the Maslow and just let it cut - it seems to take a mind of its own if I do. 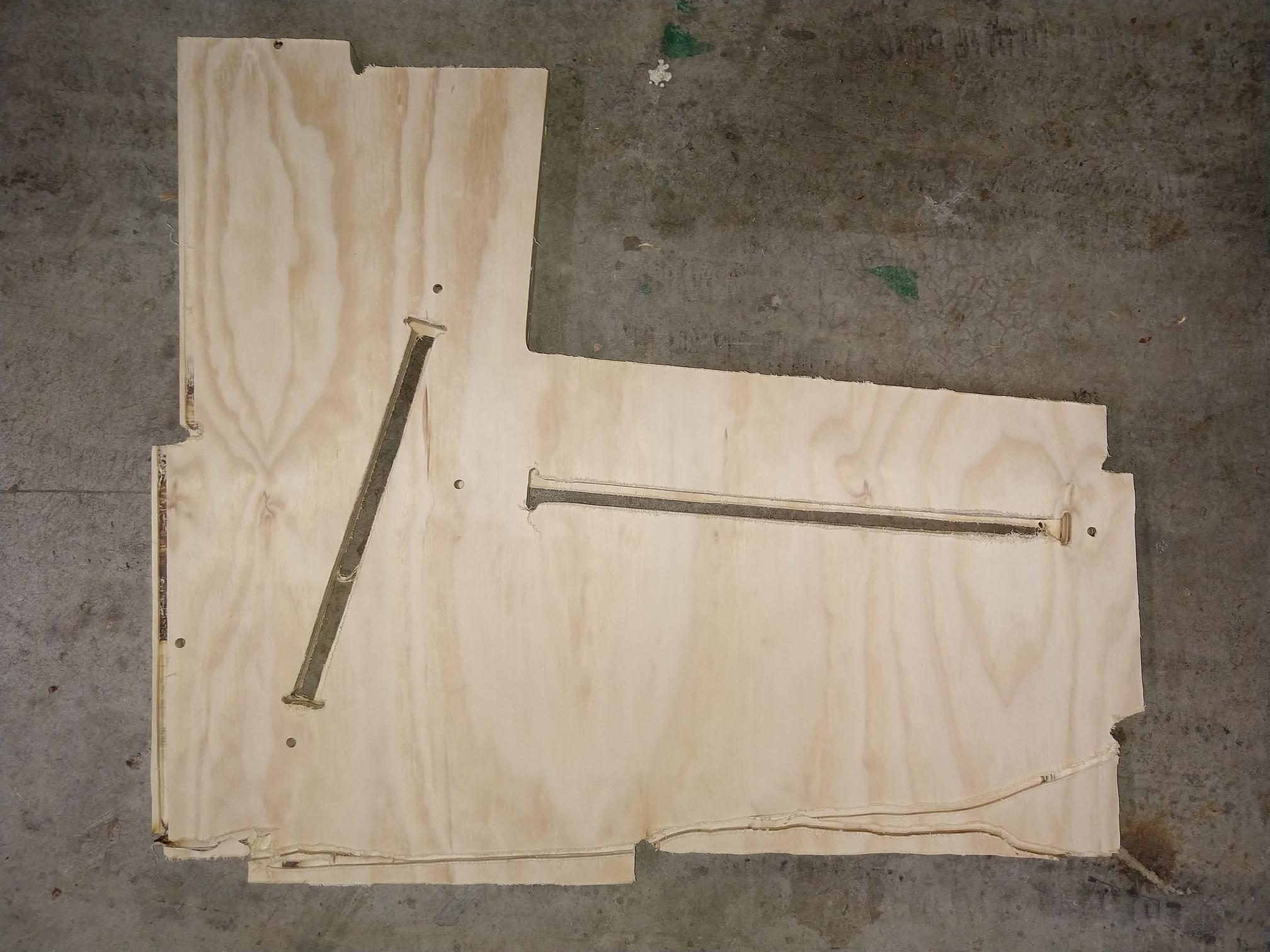 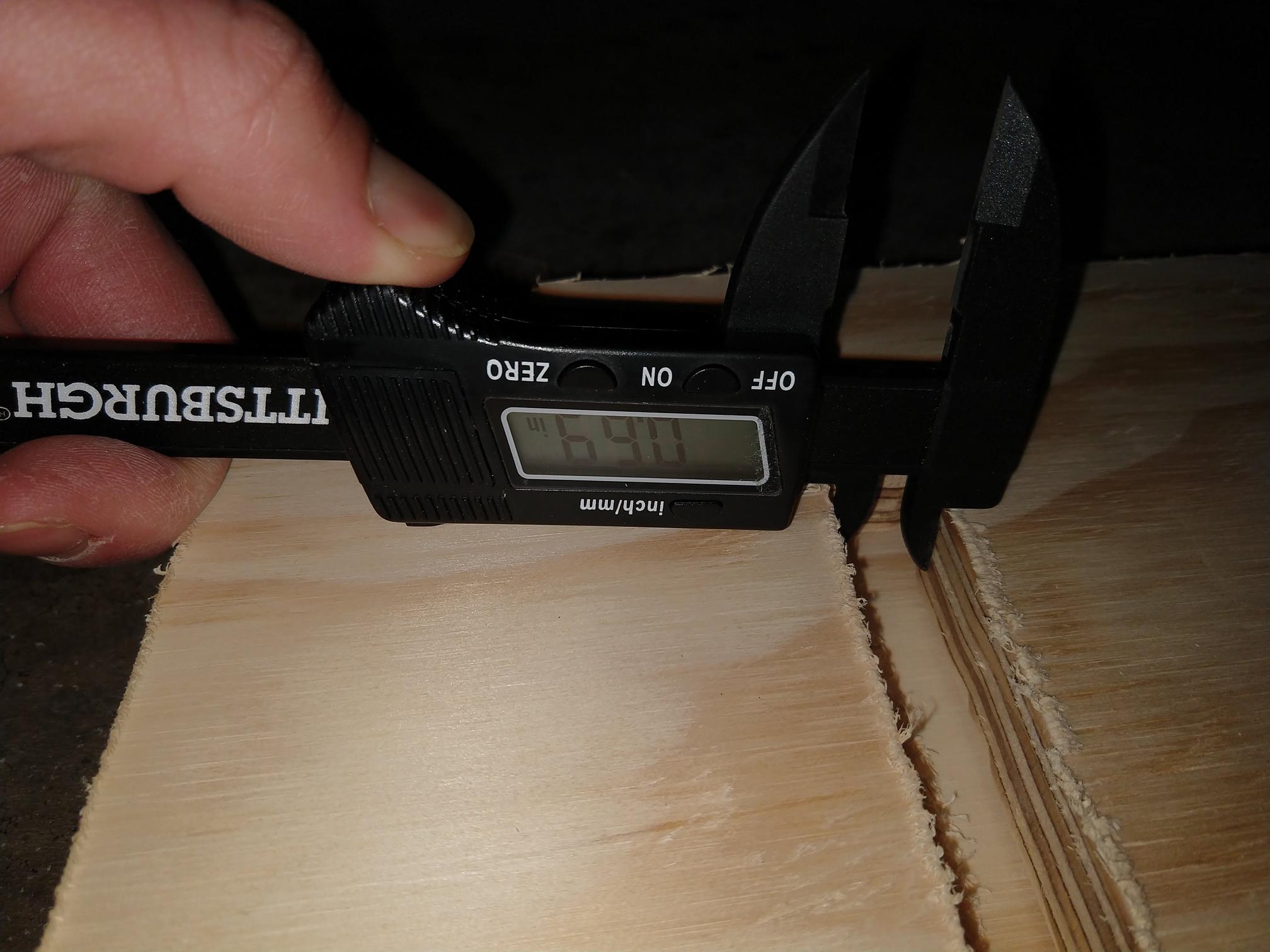 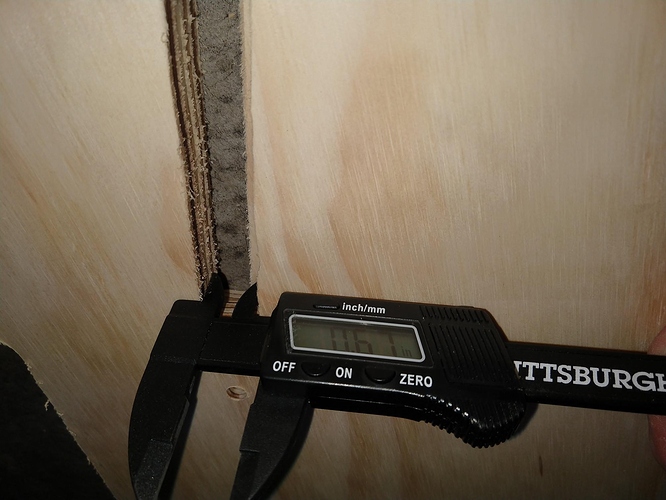 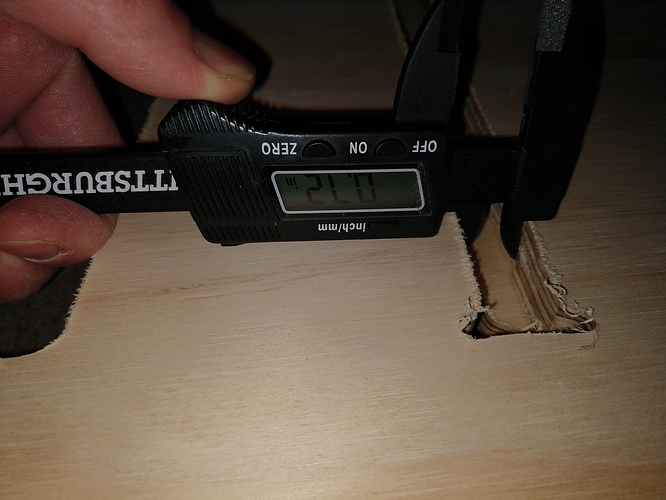 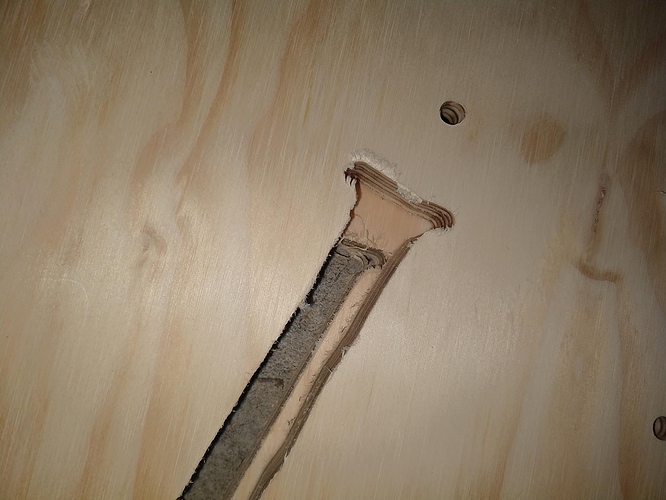 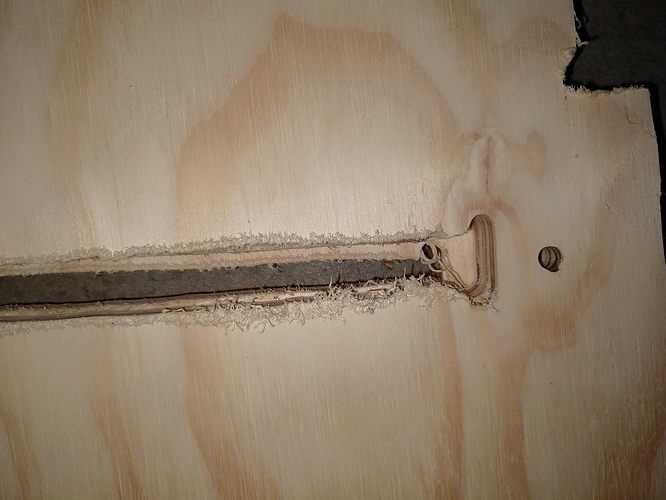 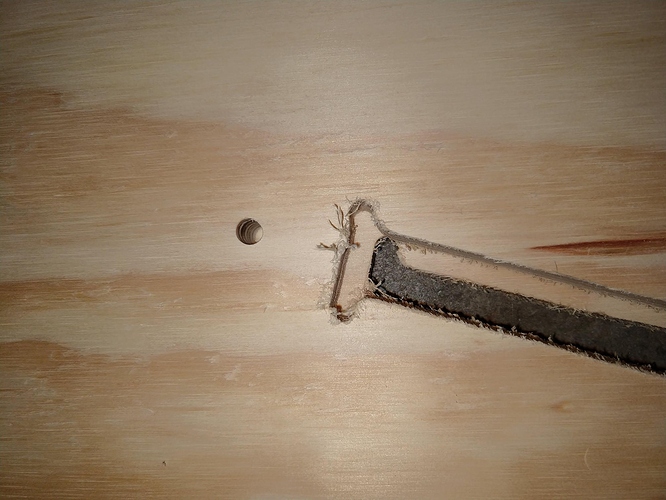 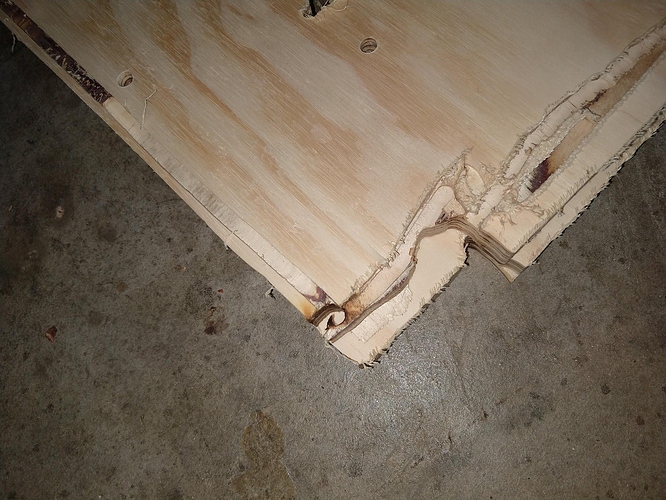 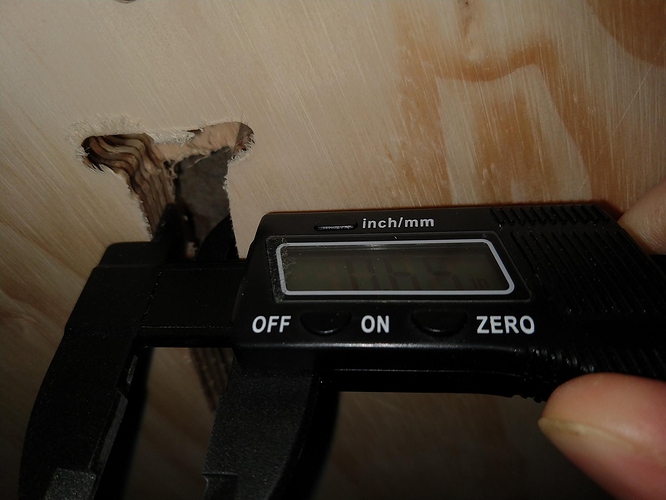 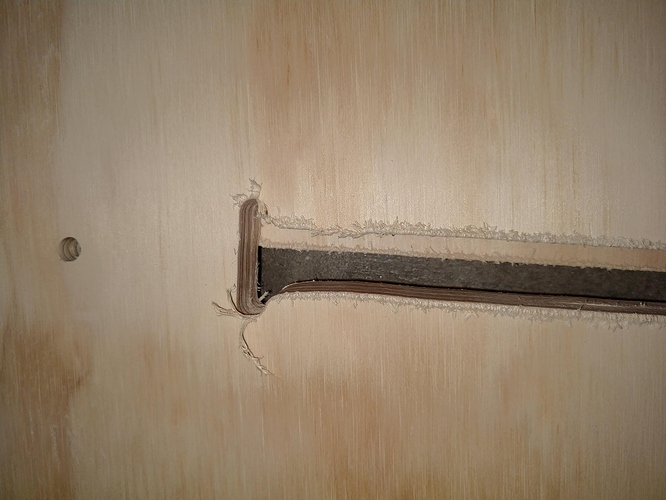 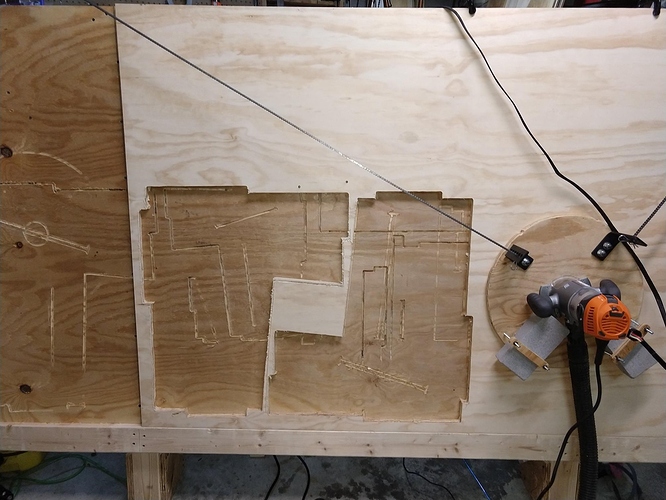 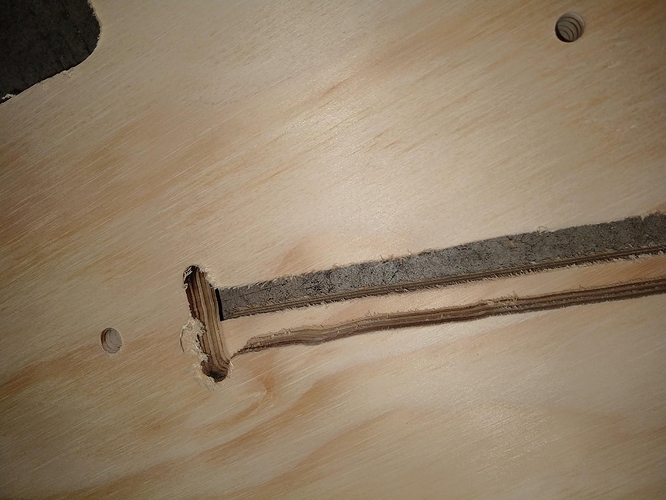 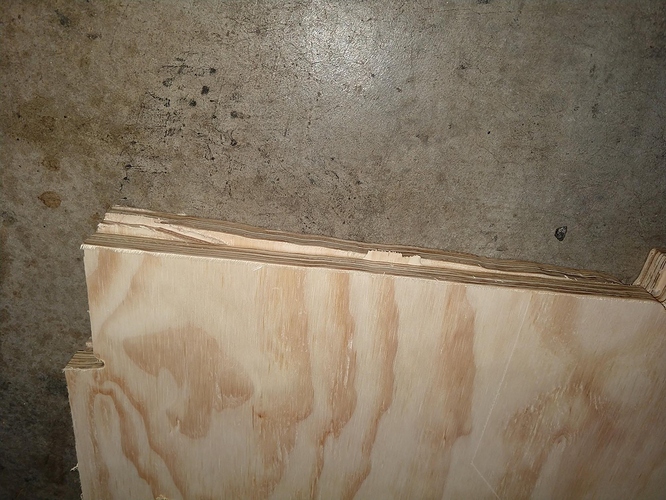 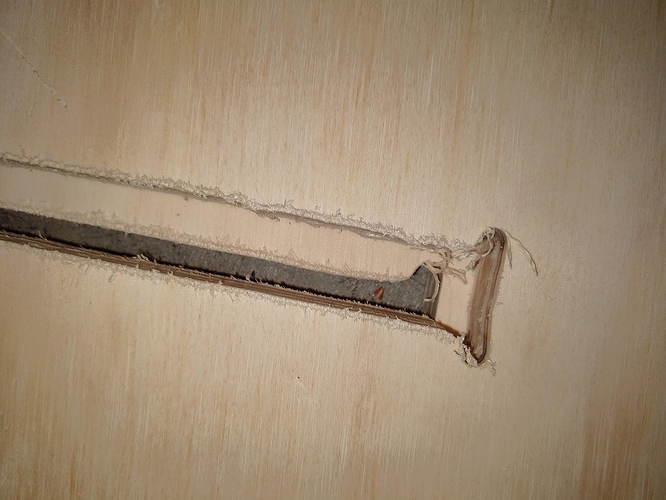 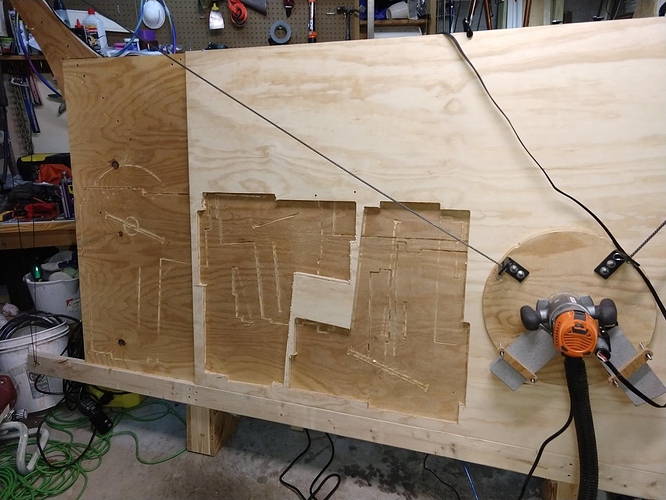 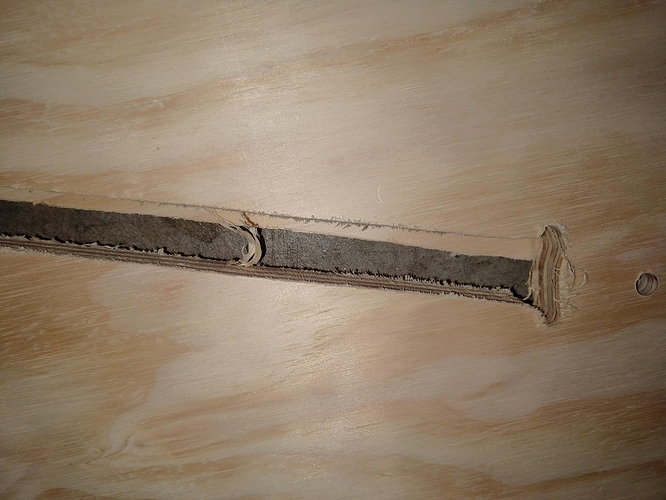 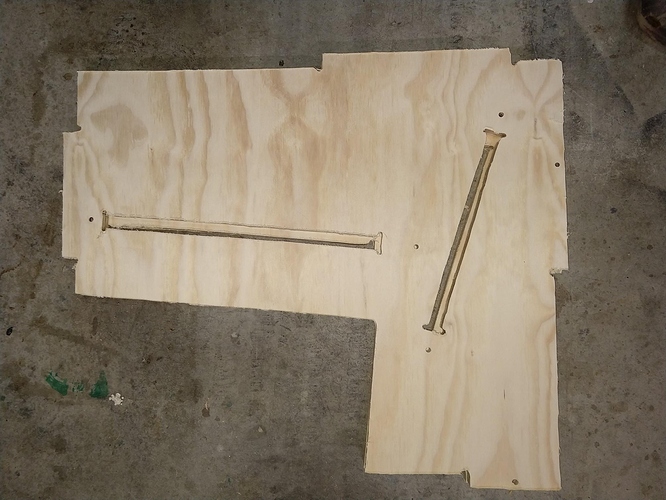 there are a lot of things that can be wrong and cause accuracy problems with the original mounting approach, you have to get all of them exactly right to have any chance.

see this page for a discussion of the problems

How is the repeatability of cuts with second and third round?
I’m wondering from the pictures if there was a variation in the positioning with different depths of the same cut. How did the deeper cuts in your last picture happen and why does it look like they are only half?

We have Maslowians cutting amazing things with the original bracket mount. It’s about how good you can calibrate and tweak the settings.
The numbers to tweak:

-> Distance between the 2 brackets <- was the setting to fix symmetry errors (square and circle stretched) If I remember correctly, if your circle was higher than wide, increase the bracket distance. 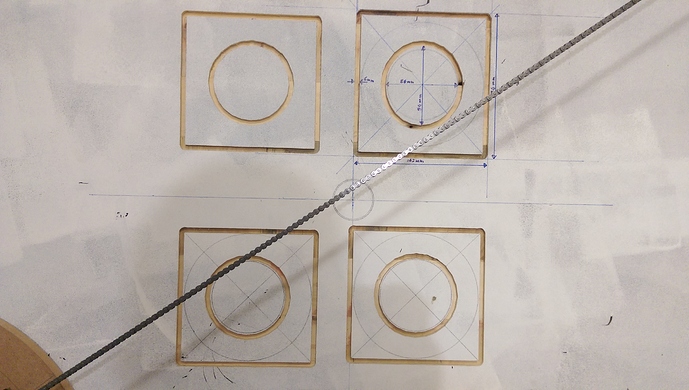 As for the limits on the sheet with brackets mount you can expect an error to be to high to accept ~> roughly in the red areas. (although the area transitions into red, the border line is just for visualisation) 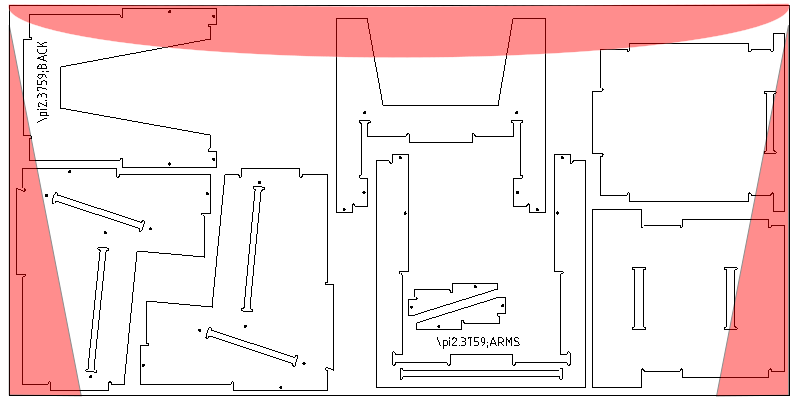 @Gero I’d like to see that same graphic with the results you’ll get with a linkage kit or the ring.

It is only mathematical assumption, I guess. The graph does not reflect the twist of the sled in the corners. It is based on calculations for a wall plotter. See here:
http://2e5.com/plotter/V/design/

Edit: One more interesting read on the math:

YAWP – Yet Another Wall Plotter

The Inspiration: I’ve been very slow to create posts these last few months.  I like to think it’s not due to laziness, but just that I’ve been so busy playing with other projects…

By chance did you use MakerCAM to generate your g-code? I ask because when I was creating my Nimble Stool, I ran into a similar problem with pocket sizes; they were undersized just like your. My solution was to let the pocket operation hog out the pocket and then perform an inside profile operation on the same line to clean it up. Doing this got me to a properly dimensioned pocket.

I’m using the original sled and original frame design, and have experienced inaccuracy as expected at the lower left and right corners. In the center it is pretty spot on. If I were to try to cut this chair, I’d break the components up try to cut them In the middle of the sheet.

Also be aware of the interference that your shopvac/dust collector hose may be causing. Mine is the standard 1-1/4" hose that comes with the smaller Rigid shop vacs and it is rather stiff. I’ve seen it bind when cutting low on the sheet putting upward pressure on the sled and also pulling on the sled when it moves to the left or right edges causing rotational inaccuracies. I’ve done more babysitting of the hose than putting hands on the sled while cutting.

I know. I had been trying to wait (I won’t even pretend to say patiently) for a ring retrofit kit (and so I never bought/built the kinematics kit). It is the goal to move over to triangular kinematics.

Maybe that will be a good next step - dial in calibration and then build a linkage kit.

Repeatability is okay - particularly the last 1/3 as it has the top 2/3 to guide it. Overall, it will go wherever it wanted to start.

The “deeper cuts” are actually the two halves stacked. I was showing the misalignment between the pieces. Given the first was in the far lower left, and the other was in the lower middle, that might be more expected.

I know my vertical distance to sheet is off. I was within 10mm as the most recent calibration instructions seem to imply not to sweat that measurement. I’ll work on improving that before the next calibration.

Very helpful - I will focus on cutting closer to the middle of the board piece by piece.

I did use MakerCam. I don’t actually have any pockets on this - just drill, inside profile, and outside profile. The overlap/gap is what the two halves look like stacked. i should have been clearer about that.

I have noticed the shopvac tube problem as well. I try to position it so that it bends, but I have larger issues to address before I get to that one.

you can actually build a linkage kit that will make you accurate without having
calibration dialed in first (the kit will not be symmetrical, but it will be
accurate)

Maybe cut your workpiece into thirds, then perform three different cuts with each mounted in the center of the Maslow. There are a lot of discussions of Maslow accuracy problems and how to resolve them. My $0.02 is to work around them.

Also, I have a triangular linkage kit that I bought but never used because my kit came with the ring linkage. For Sale: Triangulation Linkage Kit

Thanks @theHipNerd for the offer for the linkage kit. I was able to purchase a ring kit the second time they were offered. I made a few cuts with that on the original frame (better) and have since made a minimally modified 80/60 frame (as tall as I could reasonably get in and out of the garage with angeled feet to increase stability).

After a few cuts on that, I’ve gone a little crazy added metal pipe (my local big box was out of super strut), beefed up 2’ foot extensions to the top bar (14’ total length now), double up on the bricks to reduce sag, and added extensions to the ends of the top bar to try to keep the chain parallel to the cutting surface.

Once my chain breaker and master links arrive (I’ve already purchased an additional 10’ of roller chain), I’ll make some time to get back in the garage and cut some.

I have also experimented with trying to center the cuts more and adding support when I am cutting on less than a full sheet so my sled doesn’t take a dive off of the edge of a cutting surface.

I was able to get the chair “assembled” in time for relaxing at the table during Thanksgiving festivities, but I’ve still got a long way to go to get it to the level of accuracy I want to achieve.