this would improve the edge-accuracy a bit

now i can put my shoelaces back…

There is still some shifting there, but it is certainly an improvement. In order to get the most benefit the posts would have to be as small as possible and as close together as possible. Given the weight on it, I would expect this to be two bearings of some sort.

We actually have a version of the math worked out that takes into account the movement of the chain on the sprocket. It was developed by Keith Selbo who has made all of the major math contributions so far.

I haven’t implemented it yet because there has always been a more pressing issue and it seemed like it might be rocking the boat to make a big change like that without being careful.

Here’s the write up:

This could be the Swiss Army Knife for the math and chain jumps (a bit of side guides attached)! Continue with this idea please.

if milimeters are really as important as they seem to be this seems like a relatively easily removable error, but i’m not sure about your solution. looks like a good idea in a drawing, but how do you see it in reality? badly built it could drag and make it easier to skip a tooth. It could just be that the thing i built in my head is different from the one you built

This seems like a very repeatable and predictable error which might be better to be calculated away then to add another component to the chain.

The existing math accounts for the error you are trying to eliminate (at least in the standard kinematics, and it sounds like Bar has the code to do it in the triangular kinematics as well)

I think that this would add more error the pins have a finite diameter, and so you don’t eliminate the problem, you just change it’s scale, and you do it in a way that is likely to interact with the shape of the individual links

unless you add something to the front and back of the chain, it won’t help the skipping problem.

You know if we were doing the cable approach we were discussing somewhere else, this approach would be really cool, possibly even necessary to make it work

looks like a good idea in a drawing, but how do you see it in reality?

I don’t have a machine yet, so i can not try it yet, So sharing the idea is all i can do.

I did try with shoelace, round object and a pencil to draw this on paper and the error seems significant enough to make a difference. the sled is pulled up the more it comes near the edge making a slight upward curve. Visual at A4 paper scale, so scaled up to real life Maslow size I expect it to be even more visual.

It is however a small error, but a relatively simple way to eliminate it. Sparing a few resources on the calculator, just like the linkage soluion.
And the risk on typo bugs.

v-plotter.py seems to be doing this correct, i have to play a bit more with it…
Once using a bigger sprocket to get a little bit more speed out of it this error will also increase a bit.

looks like @krkeegan is the first with real life results. Thanks for that!

I hope I can gent my hands on a few motors so that i can play along with everyone. Though i’m not in a hurry. I really enjoy to share my idea’s here and see how they evolve from there.

Is the top roller even necessary in the gate? Wouldn’t the results be the same if the lower roller was raise higher than or level with the top of the sprocket? There would be a small loss of contact surface with the sprocket when the sled is at the bottom, but it should be about the same at the top. It would certainly make things easier.

I think the gate would allow to position the motors a bit different allowing the gate to be at the very edge making the available workspace as large as possible.

It sounds like your idea is an improvement, could you draw it? 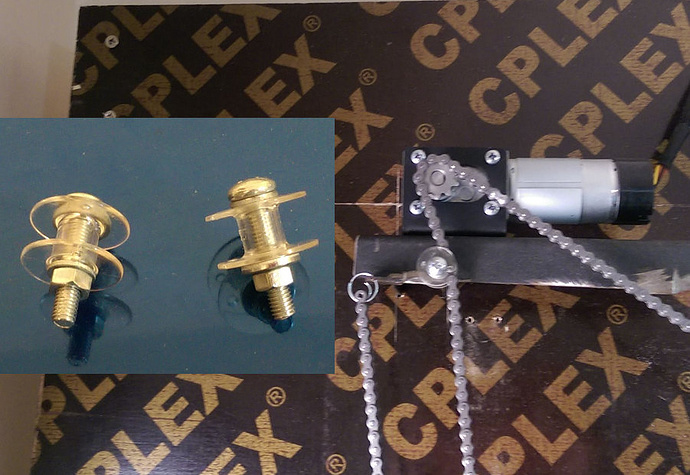 and that led me to this option: 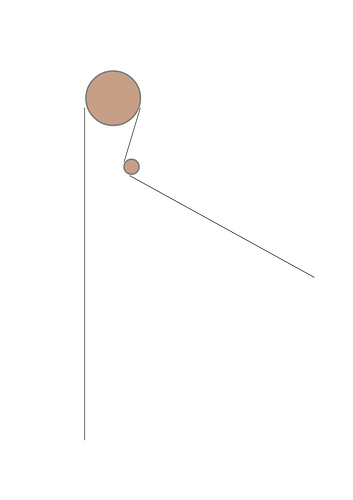 this solves 2 issues at once. it reduces the 'sprocket chain bent error’
and it does what the original bobin guide was made for, to have more contact on the sprocket to avoid skipping.

If I would do this, how do account for the changed chain length?
Put in the idler width and height instead of the motors could work.

if the center of the bobbin is at the same axis as the sprocket then the chain lengths should be the same?

Or with the addition of the extra chain links between sprocket and bobbin??
Something in that direction… it’s hard for me to get this correct as i don’t have a machine to play with yet.

if the center of the bobbin is at the same axis as the sprocket then the chain lengths should be the same?

I believe so. That’s the ‘point’ from where calculations are based on. How would the arduino or GroundControl find out

But we still need the guides on the loose side of the chain and having both is getting tight up there.

maybe when the sled is all the way at the top that this could get problematic?

steeper angle + higher tension? Maybe a rollerscate bearing would do the trick there? 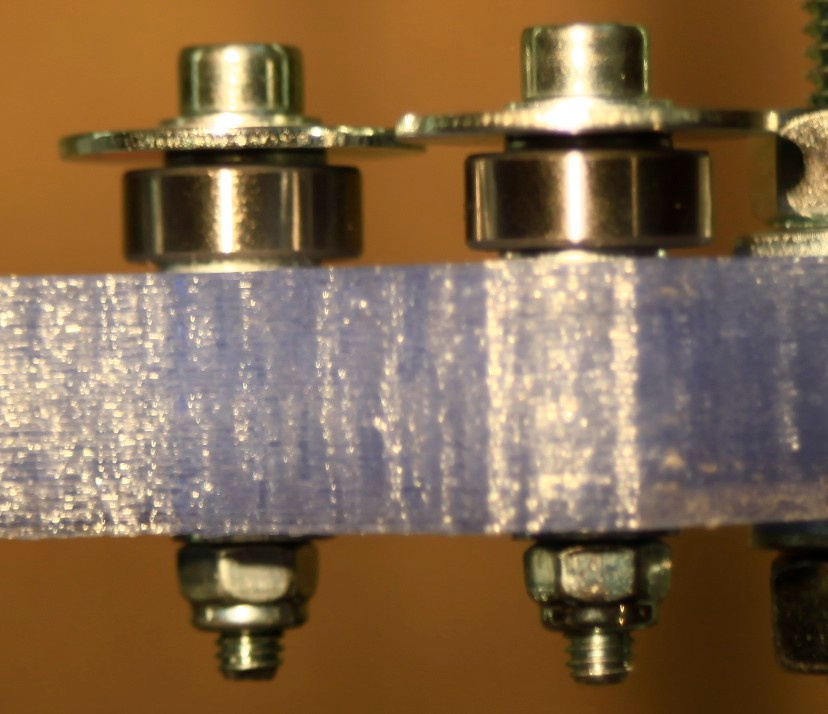 so lowering the workspace would mode the top issues further up

I think even now the error is small enough to be kept in queue from the programming side. It will get smaller, the smaller you can get the radius of the guide. A sandwich out of Bearing, Rod, Bearing.

This also allows to use larger sprockets without affecting the math then.

the math only needs to be applied to the guide diameter, and even if the main design does not use this option, it will need an option to set the sprocket diameter

Now we only need to find out what material (steel rod?), which diameter will survive the forces pulled.