I’m sure this is a stupid question but I have not been able to find the answer. Someone please tell me what to do.
I am using fusion360 and I thought the workflow would go (design in fusion360, export as .svg, open svg in makercam, set up, and convert to g code, open in ground control and start cutting)
BUT I am not able to create an svg file with fusion 360, and I am not able to find a solution anywhere. What am I supposed to do?
If someone could please give me instructions how to go from fusion 360 to ground control, I would be in your debt!

I just googled this:

Please let us know if this resolves your questions. If not I’m sure we can dig into it.

Scroll down on that update pasted here may or may not include the links:

We get a lot of questions in the forums about going from different CAD programs to cutting things out on Maslow. Hannah did a great video on how to go from SketchUp and community member Rancher did an excellent one for AutoCAD Fusion360, which can be found here and here.

I feel silly. In my frustration, I failed to google maslow fusion360. I guess I had got tunnel vision on the whole svg file thing. I must have googled some combination of fusion 360 and svg 50 times.

Thank you for your help.

Sometimes you need another set of eyes. We are all in this together.

you are going around the block to get next door

what you should do is forget about makercam, instead just output from fusion360
directly to g-code (grbl post processor) and use that in ground control.

Hey, that’s my video, from when I was just learning F360 and Maslow was very early days. I was working through output formats and Bar was dealing with my bad gcode on a regular basis, with much patience and kindness. I still use the techniques I go over in that video to output gcode, but I really was just learning along with you in that video and I make some mistakes. Still, it should get you a long ways and if you have any stumbling blocks along the way, ask and I’ll try to help if I can. That program is both fabulous and incredibly frustrating, but I’m very glad I’ve stuck with it.

There are grbl post-processors which allow you to design in Fusion in model mode, switch to cam mode, set up your cam environment and output your gcode file to your cam controller.

In my current case, for my CNC table router equipped with a TinyG, I use a TinyG post processor in Fusion outputting to Chilipeppr TinyG workspace http://chilipeppr.com/tinyg (although the TinyG can talk grbl too so I could use that post-processor in Fusion and it would work, but is not optimum).

For the Maslow with its grbl controller you could use Chilipeppr with the grbl workspace http://chilipeppr.com/grbl to act as the gcode to controller interface.

I use a Raspberry Pi to run the Chilipeppr virtual serial interface connecting the USB on the TinyG controller, which frees up the need for a pc and effectively makes my CNC a wireless device. I use my old iPad as a touch-screen controller while at the machine, but you could use an hdmi/dvi-attached computer monitor, keyboard, mouse, pendant, etc. with the Raspberry Pi running Chilipeppr and the virtual serial port server directly - with it all neatly cabled and mounted on the Maslow frame. If you have a monitor, mouse and keyboard the whole setup is going to cost you under $100. Much cheaper than a dedicated laptop and pretty bullet-proof for use in a workshop.

I won’t do the same with the Maslow - I will use an ESP32 micro controller (hot-as-heck wireless-enabled microcomtroller that costs about $15) hard-wired into the serial interface on the TinyG, making the Maslow about as complicated as a network printer. (I’m replacing the TinyG with a Smoothieboard connected via Ethernet so I can add a 4th axis). I can save the CAM output to a hot folder that will feed Chilipeppr directly, queuing it up ready to press “go”.

It may sound complicated, but is actually very simple - Chilipeppr runs from a browser - any browser. You could, in theory, run it from a phone. You can log in which means it remembers your preferences. The TinyG is wired in exactly like a grbl controller, with its USB interface coming from a Raspberry Pi instead of a PC or laptop. I sit in air-conditioned comfort in my office, designing and creating gcode. When I’m ready, I output the file to the chilipeppr input queue then go out to the workshop, set up the material, load the cutter, etc. and press play.

No dust clogging up my expensive computer, I don’t lose the use of a computer while the job processes, and I can pause or monitor progress if I have to pop out to the phone, toilet, front door, etc.

Adding your CAM post-processor to Fusion360 isn’t trivial, but it’s well-documented and straightforward, as is most stuff with fusion.

That sounds amazing. I’ll give it a try. Thank you!

If I have some spare time I will look up what is needed for a Maslow post-processor, I suspect it’s going to be an easy port from grbl, with the bed sizes adjusted.

Edit: no, it’s done by Autodesk staff, but you only need to ask.

Maybe one of the Maslow team can ask Autodesk for a post-processor? I’m sure your open-source status will fit their new-found altruism

What are Post Processors and how do I get them?

CAM requires post processors which are essential printer drivers for CNC machines. These post processors allow the CAM tools to format toolpaths into CNC programs, a.k.a. G-Code. These CNC programs are excuted by the CNC control to drive the machine...

If I remember correctly, Autodesk has a presence in Portland and they’ve visited Bar and Hannah. If memory serves, the subject of a post-processor came up

. Haven’t heard about it lately, though.

Further: you can automate the CAM > cutter process using the Universal Gcode Sender. This means once you have generated your paths in Fusion, you can send them directly to grbl or TinyG (or Smoothieboard) controllers where the job will be sitting waiting to start. You can save a lot of steps.

Patrick from Autodesk has a nice video of the process, along with notes on where to download the plugin, etc. - https://www.youtube.com/watch?v=Y7n3THx3L8Q

The difference between that and Chilipeppr is ‘cloud’ - if you have flaky internet, you might not want to trust your job to the vagaries of a possible network drop. UGS is run entirely within your home network and is still pretty good, but not as flexible and functional as Chilipeppr.

@bar, now that Maslows have shipped en masse, It might be a good time to knock on Autodesk’s door again about that post processor?

I’ve been quiet here recently, but just received my Maslow this week and hope to have it up and running soon after Thanksgiving. I expect I’ll begin contributing more Fusion file and Wiki bits shortly.

I will give them a knock (I’ll probably wait until after Thanksgiving to make sure it actually gets done). Thanks for the reminder!

I just wanted to take a moment and thank everyone of you who helped me when I was having trouble. Here is a picture of the very first item that I designed in Fusion360 and cut using my Maslow! It’s nothing fancy but I’m proud to have gotten this far. Happy Thanksgiving from NC. 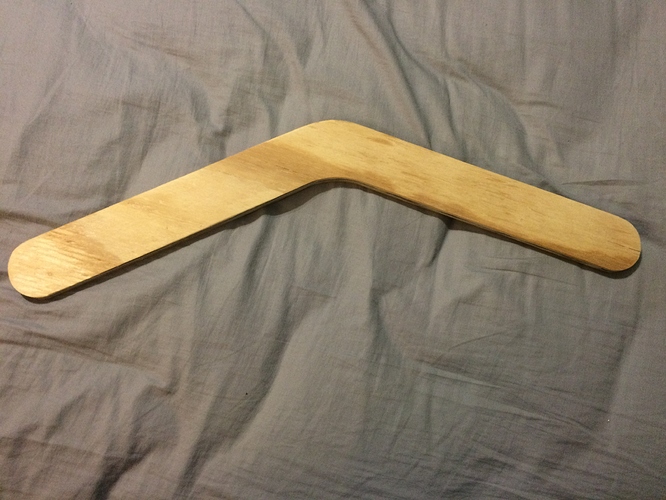 Great work you’re light years ahead of me. I look forward to cutting my fist design part.

Beautiful!!! Great work and way to stick with it!!

Did a Maslow specific post processor ever get developed for Fusion 360?

Bump on this topic, think this would be very helpful. I have cut a few items where certain features and operations did not execute properly or got skipped becauae I believe the Fusion post processor didn’t know the Maslow couldn’t do certain things.

I will pester them again, but the last I heard it sounded like things were a little stalled. Maybe an extra bump will get it rolling again.