What is the sled size?

I’ve skipped the temporary frame and sled and built my final frame and sled using woodworking tools, it was just quicker for me. My sled, though has a problem: 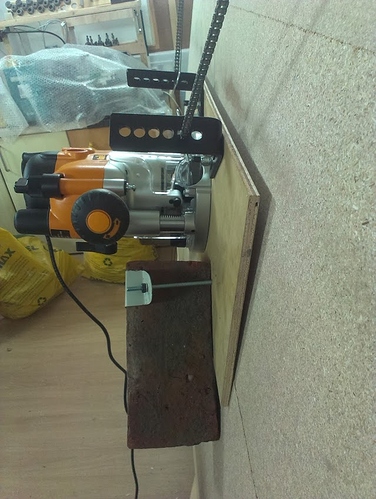 The top edge is pulling away from the flat panel due, I think, to the torque created by the centre of gravity of the router. Now the router isn’t the recommended one, as I’m in the UK, so I have used a different one. I also didn’t size the sled plate exactly as the SVG diagram I had as I couldn’t find dimensions for it. So, two questions:

I’m now thinking that the centre of gravity of my router must be forward of the lower edge of the sled, so the torque holds the router in to the board when cutting. Obviously mine isn’t and this happens.

The standard sled is 18 inches in diameter, although this value hasn’t been exhaustively researched.

Thanks for the information. That looks to be quite a bit bigger than my small dimension, so could explain my problem. I’m going to make another one tomorrow, so I’ll go for an 18 inch diameter circular one.
Thanks again.

Move the chains to holes closer to the top. Mine are about three holes from the top iirc, took a little experimenting to find the right position. With them too low my sled looked like yours

That’s interesting as I tried that. The problem I had then was the left hand chain jumping off the sprocket. (And detaching and letting the sled swing down on the right hand chain, quite scary. fortunately I wasn’t in the way and nothing got broken). I think that problem may be related to a twist I have found in my top beam, so I’m going to replace that and then do a new sled to the standard dimensions and see how that goes.
Is your sled the standard dimensions?

Not yet. I’m still experimenting with the temporary frame and sled. I’m going to make a temporary version of the final sled the next chance I get to go play in the shop, found lots of scrap plywood while cleaning out the barn. Waiting to see some more alternative frame designs before diving into another expensive (no big box store within a hundred miles) sheet of 3/4 ACX

Here are some things to look at:
Check the mounting of that motor and arm. If you have a yardstick, lay it on the face of the sprocket and look to see that it is parallel to the work surface. Compare the distance above the surface to that of the right motor. Watch the arms for movement while running.

a larger sled reduces this effect, but you really want it balanced.

Once you have this mounting height set, then you need to make your motor mounts
hold the motors far enough out so that the chains are (fairly close to) parallel
with the workpiece or you run into the problem of them climbing off the
sprockets (as you ran into)

So move the chains out to where things are balanced, and then move the motor
mounts out to match

Ah, I think I see now how it works. I have made a new 18 inch square sled and it is a lot better. there doesn’t seem to be much force pushing the router into the cut, though, so I’m wondering about a third brick at the top of the sled. Would that muck up anything? I can’t think of anything it would affect apart from CG and weight.

i have a new top beam as well, and it’s much much straighter. The chain problem is far far better, but it looks like I may need to create a new motor mount that can come forwards from the top beam a bit more, at least I will if I have more chain problems.

I designed the alternate frame to have two pieces of wood at the top, one is a
2x4 that connects the two uprights.

the other is a 2x8 or 2x10 to push the motors out further. Since there is very
little vertical force on the beam, you can move it forward with whatever means
you want that will support it’s weight. a layer of plywood between the two top
pieces will easily let you move it forward as much as needed (please let me know
how much it needs to be moved)

If you need more force pushing the router into the workpiece, the best option is
probably just to tilt things back a bit.