I noticed something odd occurring with my maslow over the past weekend.

I noticed that the right motor (connected to the same H-bridge as the z-axis) would activate (make noise) as the z-axis was told to move. This happened during bench testing.

However, it did effect the cut as you can see in the picture below. The point shown is where the cut started. The right motor seemed to pull as the z-axis was moving resulting in the artifact seen.

I was curious if anyone had seen this before. I am assuming it is noise and cross talk since the 2 motors are linked to the same control circuit… 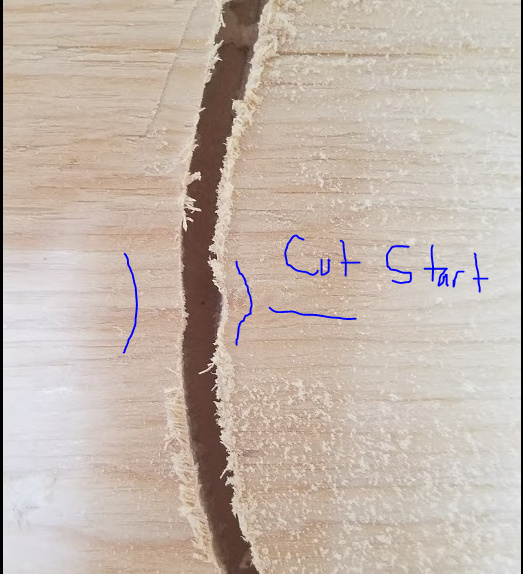 @bar talks some about PWM frequency is the thread link below, have you seen this?
http://forums.maslowcnc.com/t/problems-during-initial-calibration/278/7

Thank you for the link. I will review my settings to make sure that nothing is grossly incorrect.

Also, I should mention that this is the orginal (wire soldered) board. I just received the replacement today and will try that as well.

The cut above is from a circle but, this defect repeated on all the separate pieces.

I have sent a command to the z-axis to see the right motor jiggle as well. I guess I have a term for it now. Thanks.

I logged on to see if anyone else had run into this issue and to post if not. I’m noticing definite crosstalk when running the z-axis. Has there been any further investigation into this? I haven’t noticed the same cutting artifacts as the OP, but it is concerning that it might.

There was a change in the firmware a couple weeks ago that addressed this.
Are you using version 0.85 of both GC and the firmware?

@Darryl - I could be wrong, but I remember reading that it is also by design that the chain motor stays powered on when the z-axis is being used.

I am updated to .85 on both. I just double checked, and the cross-talk seems to be different (lessened, maybe?), but I am still hearing noise from the sled motors when I adjust the Z-axis.

Does the sled stay still while the z-axis moves?

It does. Since the update, I /think/ the noise is less, but I’m not sure. It’s not a problem per se for me, but it does point to a possible greater issue.

point to a possible greater issue

You are not alone on this one.
Since I can’t look into the code, for me it’s just a gut feeling following me.
My cables are spread out, but still can’t fight the idea that I want a single chip for each motor (plus one spare in case one fries, or to move the vacuum left and right with the sled.)
Cross-talk has been discussed a bit to often to not be taken serious.

http://www.maslowcnc.com/oldforums#!/software-issues:z-axis-calibration-and-moto
Was the explanation. for when both are powered on…

Ah, thanks Larry. I guess there still is an issue somewhere, but at least it’s known why the motors are on.