A novel form of inaccuracy

I’m working on a project and wanting to cut a hexagonal grid pattern. I’ve modeled the grooves as 6.2mm, and am using a 1/8" cutter (3.175mm), so in theory the pattern can be cut using 2 passes for each groove. Here’s an image of what I’m getting: 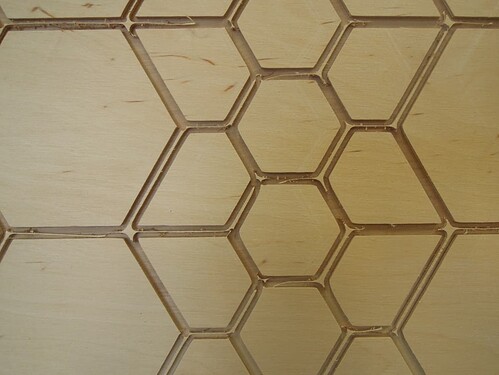 The tool takes a counter-clockwise path around each shape, so that ultimately each groove has the tool pass once in each direction. I’m aware that this strategy leaves some waste at the vertices, which is OK for now. The horizontal grooves are very close to being the correct size, within a tolerance I’m happy with, and should tidy up easily.

These cuts were done about 600mm to the left of center of the work area, and just below the center vertically. I’m puzzled about what sort of inaccuracy I’m looking at, so thought I would consult the brains trust here. I’m considering making a few similar cuts to the right of center just to establish whether that is a relevant factor - anything else I should test?

Oh this is interesting.

My hunch is that what you are seeing is the force of the router bit pulling to one side as it cuts. Because it’s spinning in one direction it’s trying to walk to one side so play in the z-axis or flex in the bit could result in something like that I think.

Would that force pulling left or right have more play depending on how high the sled is/ how long the chain is?

I saw something somewhat similar when one of the cutouts was a 4 pass cut with each successive cut reversing. The overall cut was much wider than the others due to the reversing of the sled direction.

I think you’re on to something. The higher the sled is (the chain is coming straighter off the motor, the greater the tension and you would think there would be less play with greater tension. The chain tension with the sled directly below a motor would be the weight of the sled. At 45 degrees, it would be 1.414 times the sled weight. As the angle gets flatter, the tension goes up like crazy. It’s actually a trig function as you may have recognized 1.414 for 45 degrees.
Since there are 2 chains supporting the sled, if the sled is in the center and the chains are at 45 degrees, the tension on each would be sled weight/2 X 1.414. The tension on each chain is a combination of the “share of the load” and load angle factor. In other words, if the sled is longitudinally 1/3 the total width from directly below say the right motor, then that motor chain is supporting the inverse or 2/3 the weight, multiplied by the angle factor and the motor that is 2/3 the distance away is supporting 1/3 the weight of the sled and the chain tension is that weight multiplied by the angle factor for that chain.
So my guess it that if the cutting was done high on the sheet and closest to the center, the tensions on each chain would be high and close to equal to each other which I would think would provide high accuracy.
Router bit rotation will also cause the sled to pull like someone else mentioned. This effect is common on a milling machine.

I suppose it may well be a combination of router bit rotation and chain tension. The frustrating thing is that I had selected the described toolpath with the thought that it would minimise exactly that kind of error, since in each movement the sled should be pulled away from the center of the groove by the rotation force. I’d expected that it would improve the consistency of groove width.

When I get the time, I will run some tests in different sections of the work area to see what else can be learnt.

set a camera on it while it’s running, check if the sled is tilting or pulling
away from the workpiece at any point.

Collected some more data. This image shows a scrap of ply that I’ve run the same gcode on 3 times, in different parts of the work area - that is, I moved the piece, moved the sled to the piece, reset the home position and ran the gcode. 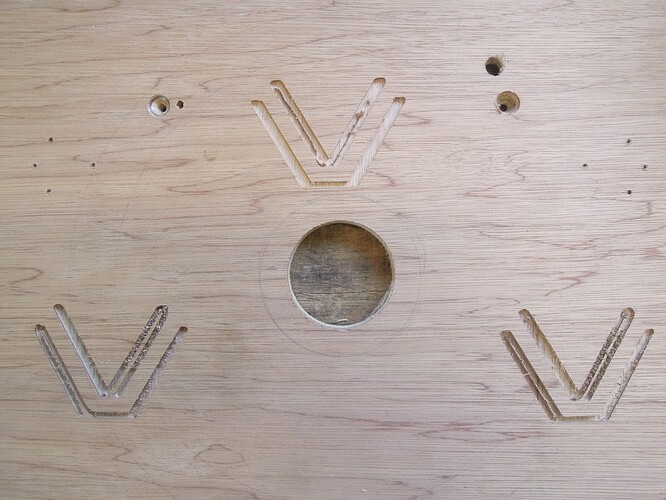 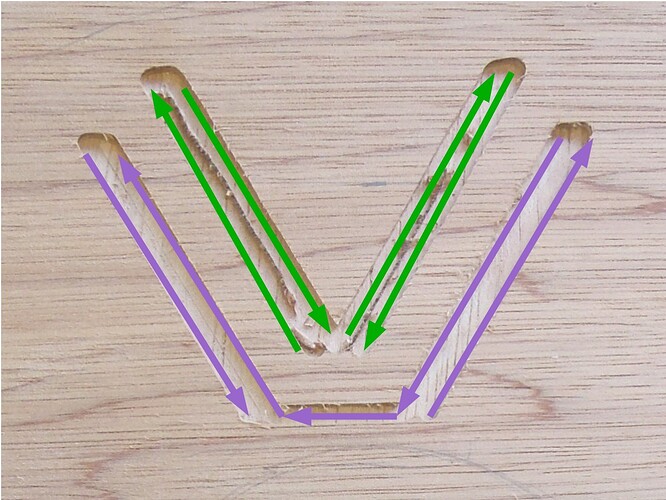 The position of the cuts on the scrap roughly mirrors where they were done on the Maslow, one in the top center of the work area and then two lower down, one to either side. The top center cut looks more or less exactly as I’d expect - there is a small amount of deflection away from the plotted path due to the rotation forces so that the groove is widened when processed in one direction and narrowed when processed in the other direction.

The other 2 cuts still puzzle me. The deviation is clearly present, and can be reversed by reflecting the tool path, but not by swapping sides of the work area. And it’s not always in the direction that I’d expect based on my understanding of the forces at play. If it’s just down to low chain tension in the X-direction, shouldn’t both arms of the upper V groove get wider, and both arms of the lower one narrower??

is there any play in your z axis router mount? Is the router shifting in the mount at all? @bar mentioned that above.

I’m assuming your router has a clockwise rotation looking down from the top. If so then the top cut is called “conventional milling”. The bottom is called “climb milling”. 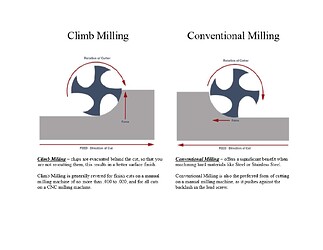 Also, wether you are using climb or conventional milling depends on which side of the workpiece you are looking at. One side of the cut will be climb while the other is conventional. Conventional milling WILL pull your bit into the material, aggrevated with a higher chip load. Climb Milling WILL push your bit away from the material, also aggrevated with a higher chip load.

I typicaly make ALL my cuts using climb and program the CAM accordingly. I spend a lot of time changing tool paths and feed directions to minimize the problem you are having. Sometimes, depending on material and how I plan my tool changes, conventional milling can’t be avoided.

Most of the time for me, this is a feeds and speeds problem. As @Orob eluded to, this could also be some looseness in the Z (are you using the stock rigid router set up?). It could also be excessive chain stretch, gear backlash or even some beam flexing.

My router set up is a cheap Chinese spindle (like this on AliExpress) mounted on a meticulous-style z-axis. Things feel pretty rigid and I haven’t noticed anything weird going on during the cuts.

These cuts are using a 1/8" 1-flute down cutter, 1 pass at 3mm depth and 400mm/min. It seems (to me) to be reasonably happy making the cuts at those settings, but I’m happy to rerun the test with variations.

I think I understand the discussion about conventional and climb milling, but it still leaves me expecting that the top groove should therefore be consistently widened and the bottom one narrowed - as seems the case in the cut made at the top of the work area.

What feed rate are you trying to cut at? Have you tried slowing down the feed to see if that helps?