So I got my first payed job with the Maslow. My brother and I are rebuilding a generator back panel that got smashed by a negligent driver. I was tasked with making the cut-outs in the 0.040" aluminum sheets, which meant I got to try my hand at machining aluminum on a router. I’m rather pleased with the results: 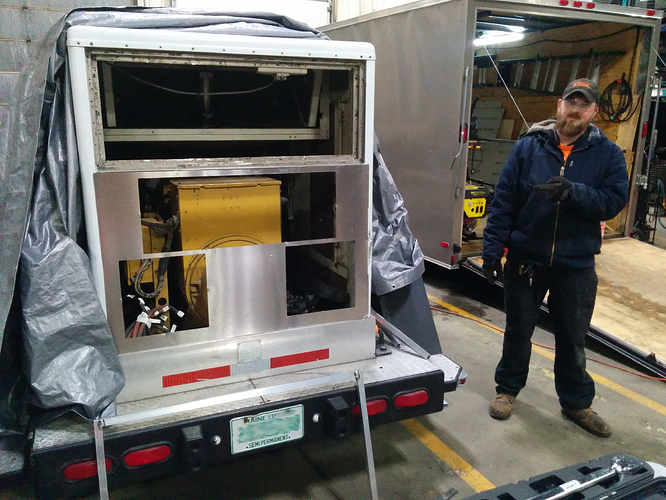 Still needs a little work to finish it up. We already took the edges to a break to make flanges and roll the corners. The cut-outs are for a control panel and access panels.

While I’ve done aluminum machining on Bridgeports and CNC mills, I’ve never done it on a router before. It took quite a bit of trial and error to get it to machine. I had read somewhere that smaller bits meant the spindle had to work less, so I initially tried using 1/8" bits. After breaking 4 of them with various settings I switched it out for a 1/4" two flute upshear. This cut through the material no problem, and since it’s only 0.040" I was able to go through the sheet in one pass. At 400 mm/min it was quite noisy, however, and I will need to try to optimize the feeds a little better. I only have the 1 bit that’s 2 flute upcut so I played it quite conservatively as to not break the bit. According to my math, 2000 mm/min is around the right speed for this process. I might be able to bump my speed up to the max 1000 mm/min and get half-way decent results. Otherwise, I will have to try single flute bits like I have on plywood. 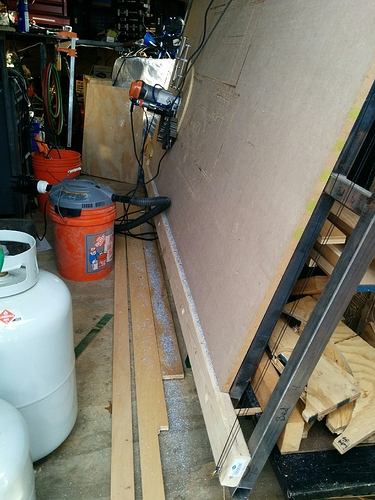 Also, my tiny little bucket head shop vac did not have the gumption to suck all those little chips. They collected up on the inside of the router base, too. They seem to be too heavy to get pulled by the vacuum. I made quite a mess!

I’m going to need to figure out a better dust collection system moving forward. I know the little guy is far from ideal. I have thoughts about building something akin to what Matthias Wandel made on his Youtube channel.

I would be curious to hear what you arrive at as the optimal feedrate for cutting aluminum. For the tests I did I used the single flute bits from our website and they worked decently well. I was taking very shallow passes (.01mm) which was probably overkill but I just wanted to be cautious so it’s probably worth revisiting to see how much faster would be possible.

I would be curious to hear what you arrive at as the optimal feedrate for cutting aluminum. For the tests I did I used the single flute bits from our website and they worked decently well.

I wasn’t sure if they would work, that was going to be one of the next things I tried. I’m on my last single flute, and it’s been my workhorse so I didn’t want to risk breaking it. I have more on order, but they are in transit still. It may be a little bit before I machine any more aluminum, but I have projects in mind that will need me to figure this out a little more. The biggest set-back I’ve been running into lately is that winter is here in New England and most days it’s far too cold to work in my uninsulated trailer. Really wishing I had a garage or some other workspace that was easier to heat.

I was taking very shallow passes (.01mm) which was probably overkill but I just wanted to be cautious

That’s very conservative. In machining school we were trained to take anywhere from 0.005" (0.125mm) to 0.02" (0.508mm) in each pass depending on the finish we were going for. Admittedly, that’s on a Bridgeport, which is much more robust than the Maslow. However, 0.040" is 1.016mm thick, so I was able to machine just over a millimeter without any problems. That makes me wonder just how conservative we were at school. I would be curious to see what kind of finish 1mm step-down would give me on a 1/4" sheet of aluminum.

I have no experience with aluminum. I wish my grandfather was around - head machinists for Hughes Aircraft. With many Zero Defect awards. He would love this. I have seen a video of a guy doing this for a living saying faster speeds and cutting oil is whee it is at with aluminum.

I had great results with this bit. 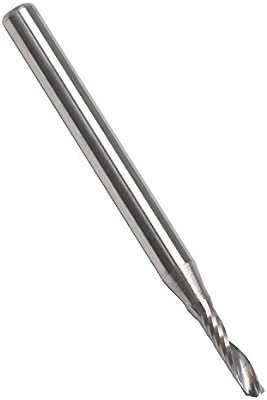 I wish my grandfather was around - head machinists for Hughes Aircraft. With many Zero Defect awards. He would love this.

I’m afraid my work would not live up to his standards. The final results here are me saying “good enough”. There’s a bit of clean-up that’s going to need to be done between now and the end of the project. But you know what they say, “Grinder and paint, make me the welder I ain’t”.

That being said, I would feel very humbled by his presence. I know I could learn a lot. I strive to be that good at what I do.

I have seen a video of a guy doing this for a living saying faster speeds and cutting oil is where it is at with aluminum.

Yeah, 400mm/min was waaaay too slow. I’m worried that 1000mm/min might even be too slow. I did have a bottle of WD-40 in hand lubricating as it cut. I wasn’t hosing down the piece, but I tried to keep some oil at the cutter at all times. Which might explain why my shop-vac was having so much trouble with the chips…

I had great results with this bit.

What feedrates have you noticed it works well with? I was snapping two flute 1/8" bits like it was no tomorrow when I initially tried that size cutter. I had some success down at 100mm/min, but cutting the entire panel was going to take 4 hours at that speed. Even 200mm/min snapped the bit after a couple of minutes of cutting. If it’s just a matter of me being impatient then I can plan around it.

Are single flute bits the way to go with aluminum? I know they help achieve a more ideal chipload based on the max feedrate of the machine for plywood. If that also translates to aluminum the I should grab some of the tools you linked and experiment further.

This was working well at 20ipm, if I recall correctly. I don’t know much about any of this, but I tried a few bits and this one was significantly better than anything else I tried. I didn’t try any 1/4".

What was your step-down? I think the deepest I tried was 1mm, the shallowest 0.2mm. Maybe it was just the two flute bit. I know that because it has two flutes there physically is less material, so I could see it being stronger then as a result.

@MeticulousMaynard Would it be OK if I used your picture in the newsletter? (and gave you credit of course!)

Of course! That would be most excellent!

I know I like to look through the newsletters for inspiration. I remember seeing @rancher’s aluminum work in the newsletter awhile back and it’s what gave me the idea to try this panel!

I am a complete neophyte on milling aluminum with a router CNC, but I recently had a major “AHA” moment I can share. CUTTING OIL! The difference was night and day. Note that WD40 is NOT cutting oil, and does not do the job. I had been using WD40, but decided to try real cutting oil and couldn’t believe the difference.

I’m not using a Maslow, but still a router based spindle. A conservative 75mm pass at 1500mm/m using a single flute 1/8” cutter at normal router 24,000rpm. Barely usable results with broken bits trying to lube with WD40. Clean operation with cutting oil.

Note that WD40 is NOT cutting oil

Certainly, it’s a general purpose fluid. But, given that I don’t have a more proper cutting fluid on hand, its better than running it dry.

Sure, I got passable results with a 1/4" end mill. I’m planning on using 1/8" single flute bit when I do this again. Also, I’ve been meaning to get some of this stuff for my band saw and drill press. It’s water based so it’s easy to clean up. I’ve used it a ton at school and work and it does a great job for milling aluminum.

Off to to the body shop! 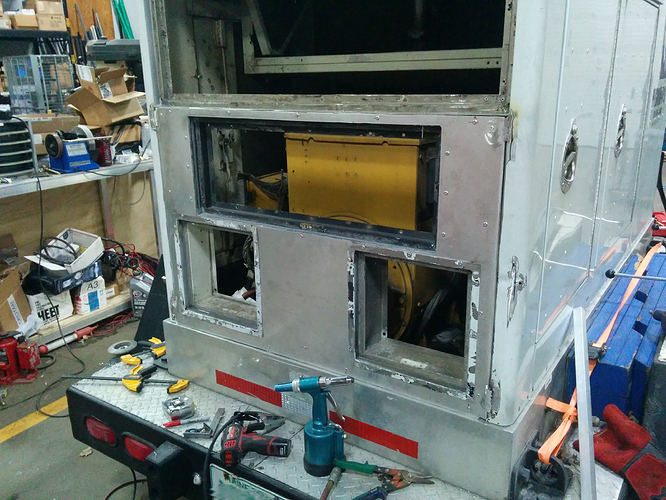 I forgot to take pictures of it, but we made up an aluminum box tube frame that the panel is riveted to. It was a tight fit, but we were able to put it all together this morning.

I ended up having to recut the panel. The update to 1.00 really saved me here. I wasn’t getting good tolerances before the update and the original panel came out distorted. I tried to plan around it, and ended up a quarter inch too wide on the top opening. We had enough material to make 3 panels, so I was able to cut another one easily. I updated my machine, did a round of calibration, and was able to cut one that was right on! 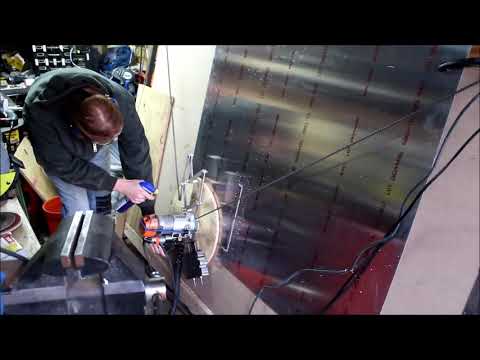