I have talked about making an air plane aided by a CNC. Watch me!

I found out that you could inexpensively build a ultralight plane. I have seen one in person. 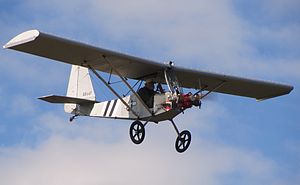 The Milholland Legal Eagle is an American high wing, strut-braced, single engine, tractor configuration, conventional landing gear-equipped ultralight aircraft that is available as plans from Better Half VW of Brookshire, Texas and also produced in kit form by J&N Bolding Enterprises of Baytown, Texas and intended for amateur construction. The Legal Eagle is so named because it is capable of being built in legal compliance with the United States FAR 103 Ultralight Vehicles regulations, even when...

I have located a motor for a price I can afford. So it begins. The wing is made of 100’s of pieces of spruce glued up.

At 50 MPH I can drive faster just might not be as fun.

Glad to see you stuck with it, Bee!