Hello, I know this is not a new topic but wanted a fresh thread to summarize and discuss. I have a maslow working pretty well… as long as we don’t cut in bottom corners. We did pretty good on our counter weight system to relieve slack (it’s been posted here before) and I’m wondering if something similar makes sense for this problem as well. As an unscientific approach manuall pulling to the downward corner I think helps. Alos, the 1st pass is usually fine. on deeper cuts into those corners all kinds of stuff goes on where it doesnt go as far to the side as it needs to. We were going to rig a tension system to pull down towards the bottom corners but then I realized that doing so would be even tension in both directions but we need tension only in the nearest corner and only really when it comes near it. Any ideas on how we might achieve this? I think we’ve tried the other solutions mentions for this issue so we’re trying new territory here. Thanks. 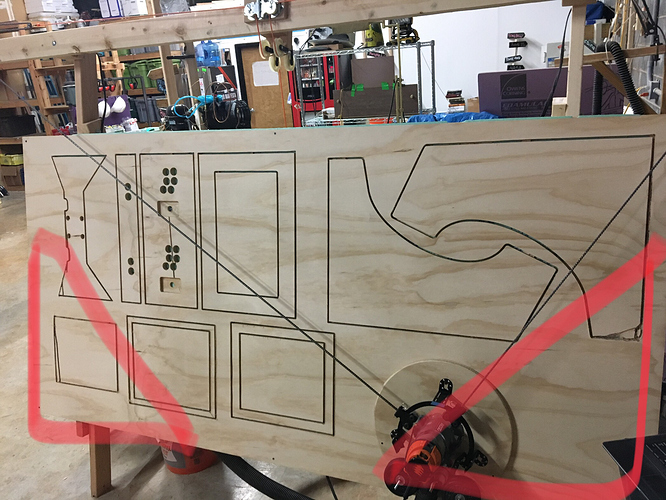 Can you remember which direction the bit was traveling on each of those cuts? Were all the shapes cut in continuous passes around them?

there seems to be the most consistent failures in downward cuts. whether straight or at an angle. we tried slowing down considerably too

Can you alter your cuts to avoid having downward cuts in those zones? It would make creating the gcode program more difficult, but it would use motions that work better in those areas.
Another approach would be to move the sheetstock so those cuts will occur in the middle zone.
Not mentioned was the depth of cut in each pass. Taking shallower passes in those zones might help.

As I posted in the other thread, these two patterns show different (but somewhat related) problems

the one on the right, where what should have been a sharp corner ( a backwards L ) but is instead rounded was cutting to the right and then up. The tension on the left chain (the long one) was very low, and it went slack because the sled got stuck on the workpiece. As the right chain (the short one) started pulling for the vertical part of the cut, it got the sled unstuck so it swung to the right as it moved up, creating the rounded corner.

This can be improved (in some cases, but not here for reasons I will cover below) by having a longer top beam so that the angle of the right chain is not as close to vertical, so more of the gravity on the sled results in sideways force.

This cut was made with the sled moving down. In this case both chains went slack when the sled got stuck, and as the sled then tilted away from the workpiece, it broke free and dropped under no control (thus the wandering cut).

We have a wiki page that shows these problems, along with an explanation of the cause for each

Thanks. We will try to do up cuts. But also working on something to not require that. It’s s pretty limited solution. We currently resort to moving the media around to avoid those areas. If parts are small enough that can work.

We were going to rig a tension system to pull down towards the bottom corners but then I realized that doing so would be even tension in both directions but we need tension only in the nearest corner and only really when it comes near it.

You could just pause the cut when it gets to the bottom corners, attach the tension system on the appropriate side, and resume the cut.

… though I don’t know what this would do to the calibration since the chain sag is calculated based upon the weight of the sled and, effectively, tension is the same thing.

I could, but half the fun is trying to make a better tool, not slaving a person to it. I have some ideas around curving a fotter and having a tenioner on rollers so that when it nears a corner is slides into the corner, when in the middle the rolling tensioner is directly below the sled because it’s flat. Im not trying to go too crazy tho, if other suggestion to reduce friction fix it I’ll be happy and move on

thanks. I’ll try to reduce the friction on the sled and test some stuff out. reducing the tilt of the work surface would be a lot more work.

Out of curiosity, do you have a dust collector hose attached? My machine cuts pretty well “down there” if I remove the hose.

I will be expnding the top beam to 12 feet to try to improve performance in the corners.

yeah, good call. We had some failures from a hose being too rigid, but a couple of these were without.

shut to put closure on this. If we can make things slow enough and slick enough and heavy enough the corners work, and more reliably on upcuts. Still an area for improvement IMO but it’s now workable for me