I haven’t tried this idea yet, but got it after looking through the forums where people were running bungies or cables from the bottom corners of the sled. It seemed like the problem with those designs was that the counter force was never kept inline with the bit and not kept horizontal where it was needed most. Enter my design of a Horizontal Weight System. I look forward to all criticism, feedback and questions!!! 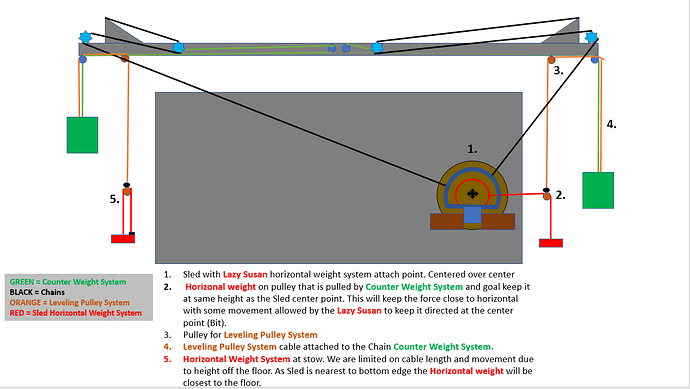 I would just have a pulley off the bottom corner rather than trying to move it
up and down.

should work as long as you only cut on one half of the workspace. 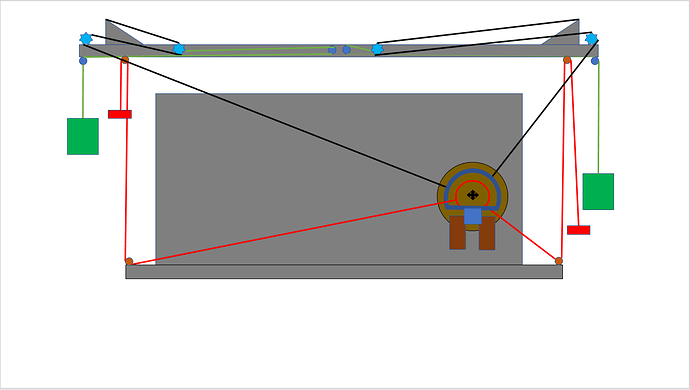 Version 2 it would allow the pulley system to remain installed with constant force. Although the force would not be directly horizontal such as with version 1. Also may run into interference issues with the z axis set up or bricks, especially at top corner. 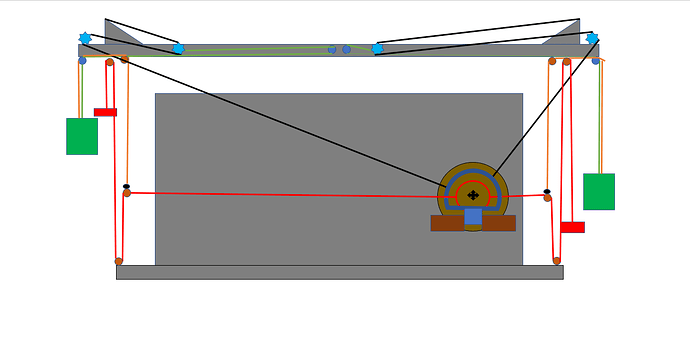 Version 3, the combination of versions 1 and 2. What do you all think?

On second thought, i don’t think the angles would remain horizontal in version 3.

Version 3 looks good on paper. I struggle with 2 chains and a sled to get plywood on my frame typically by myself. Adding a couple cables or ropes would make it impossible to load/unload unless they were quick release.

Agree, quick release would have to be part of the system. Also for versions 1 and 3 the pulley for the horizontal weight would need to be secured in a way to prevent it being pulled towards the sled. Haven’t really solved that yet, but have some ideas

version 2 would be better, except you need to only have one wight pulling at a
time. If you are going to add two more motors to control the height of the
pulley, just have them pull on the sled

as for how to avoid the bricks, you can use flat metal plates instead of bricks,
and look at the linkage designs that have been created for ways to attach chains
without a ring or lazy susan

I’m kinda wondering what the amount or force/weight would be ideal for it.

the difference between a 10’ and 12’ top beam is about 4 pounds of force towards
the outside in the bottom corners (<4 to <8 pounds), it really doesn’t take much
to help there.