I finished building my Maslow Saturday night! And it’s working well, I was able to cut out a few nice things on Sunday.

My frame is a wall mount frame. I’ve seen a lot of discussion of wall mount frames lately so I figured I’d put mine out there too. I fully intended to take pictures during the build process, but I got caught up in the excitement and completely forgot.
At the last minute I decided to build it in the garage instead of the shed out back, so I needed to build a wall mount frame that can fold flat up against the wall so my (future) wife and I can still park our two cars in the garage.
When ‘put away’ it’s only 6 inches thick, if you don’t count the sled/router and the top bar (which is high enough that it’s not in the way anyway). For the legs, it uses a 2x4 with a bolt through the middle to act as the hinge so that they can fold flat into the frame. I did just a bit of quick math to figure out how long to make those legs to get an angle of 13°, but I wasn’t super precise about it so I don’t know the exact angle but it’s definitely somewhere between 10° and 15°.
It uses some 1 1/2" wide gate hinges to hang on the wall. Each one is rated for 30 lbs and I have 8 of them holding it up (one in each stud in the wall that the frame crosses).

I already have a few improvements planned, the biggest being that I need to remove the 2x4 that I’m using as the bottom lip to hold the work piece because it’s too thick and the sled catches on it when it tries to cut that low (I math-ed wrong, 3/4 plus 3/4 does not equal the thickness of a 2x4).
The whole thing is 10ft wide and a little over 8ft tall. I designed it so that I could put a 1ft skirt all the way around so that I can cut to the edge of the work piece (I haven’t gotten that far yet). The top bar is 18 inches above the work piece (in the y axis, not the z axis), but there’s enough room that I can raise it some later, if needed. 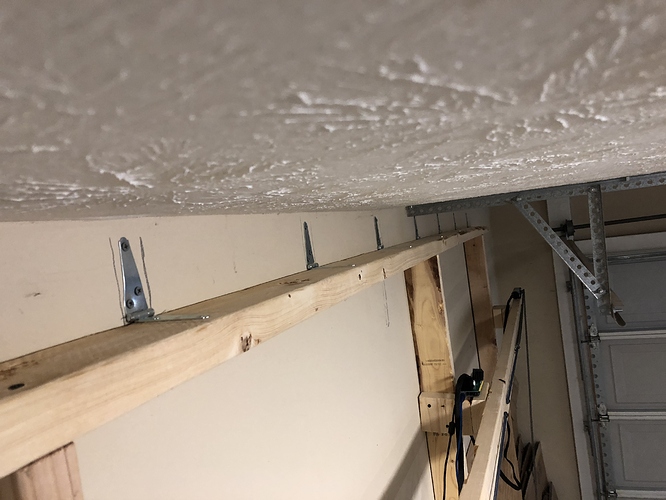 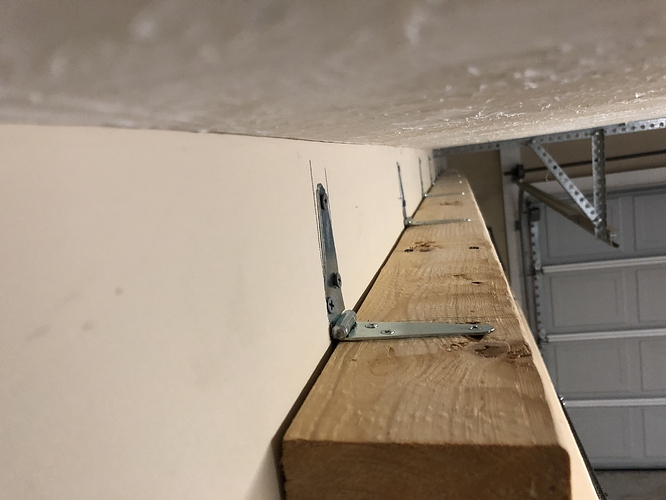 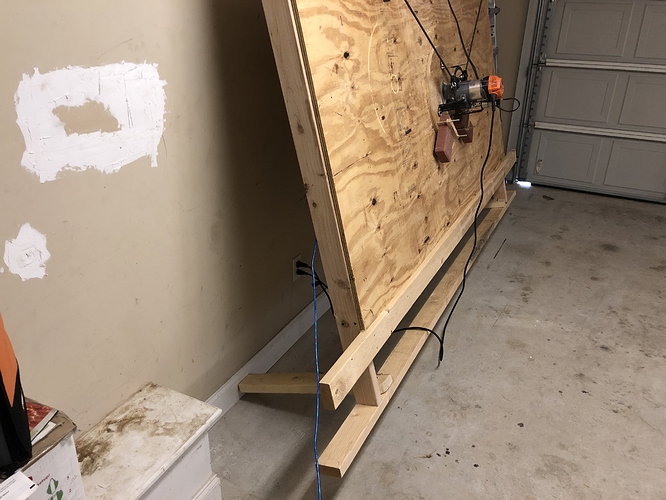 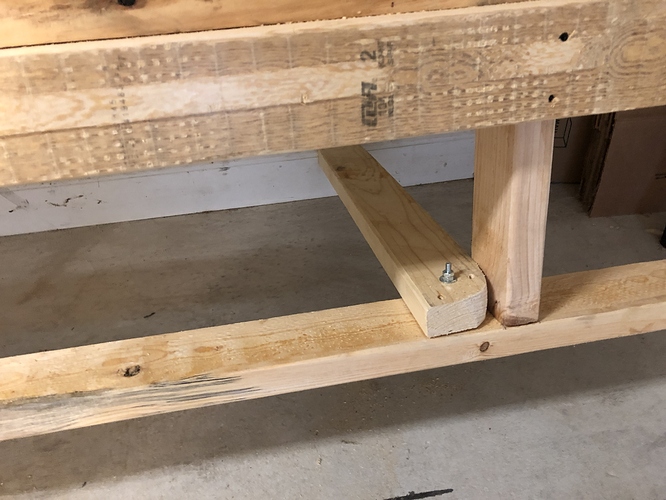 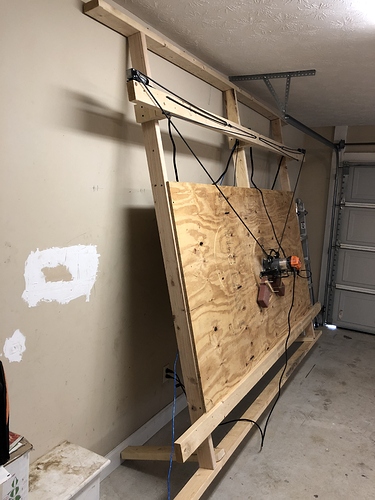 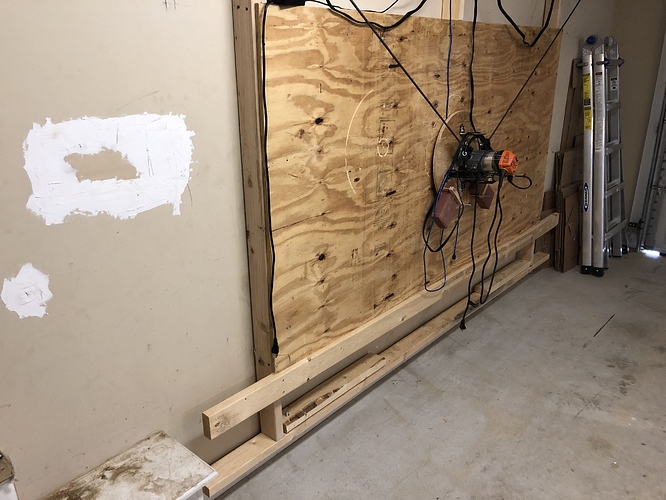 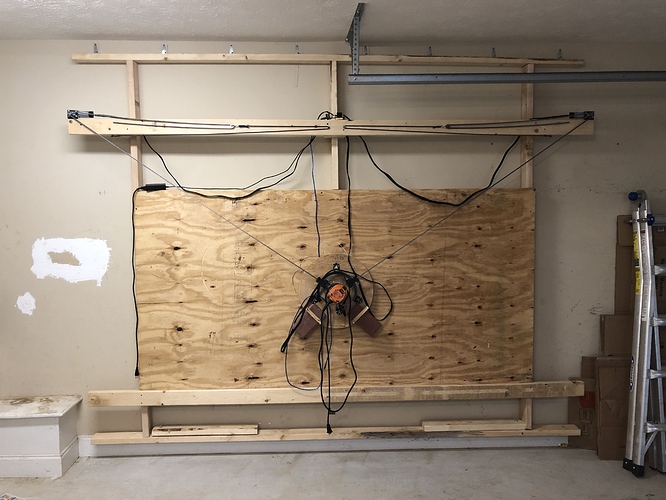 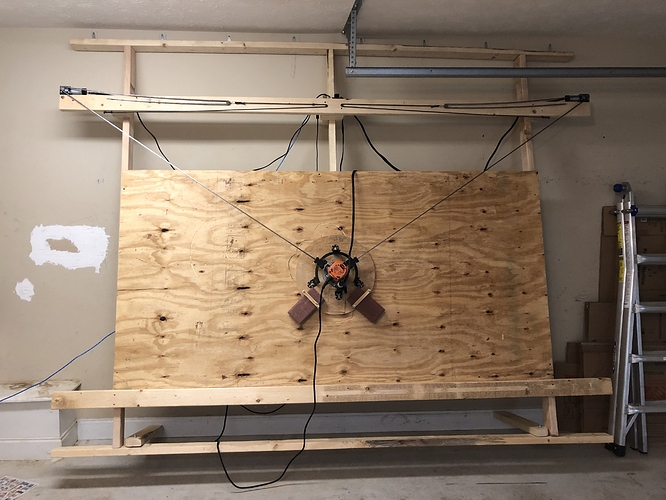 I made the same mistake and used a 2x4 as my bottom lip on my ceiling mounted frame. What’s your plan to fix it?

For my frame, I notched the leg to put the 2x4 flush into it and drilled 1/2-inch holes regularly spaced along it. I put 1/2-inch dowels into a few holes when I’m placing the workpiece on the frame. When I’m done securing it, I pull the dowels out.

I think I’m gonna double up on the 3/4" plywood. I’ll probably cut a few triangles and put them in the corners. And then I can put the 1ft 3/4" plywood skirt on top of that. (Does that make sense)

Or I could remove the spoil board and just put on the skirt, then the work piece can sit directly on that.

For my frame, I notched the leg to put the 2x4 flush into it and drilled 1/2-inch holes regularly spaced along it. I put 1/2-inch dowels into a few holes when I’m placing the workpiece on the frame. When I’m done securing it, I pull the dowels out.

Love the idea of the dowels. Maybe I’ll cut and move my 2x4 in between my vertical posts (so that it doesn’t extend forward at all. And then just use the temporary dowels as you suggest. Do you secure your work piece with clamps or screws?

What I’ve always wondered about skirts: how do you plan to use materials with different thickness? Do you imagine you’d have additional spoil boards of varying thicknesses you could put behind your work piece (if you want to cut 1/4" board for example).

Edit: here are some pics of my frame.

But recently I’ve been thinking about cutting some ~6" circles out of 1/4" and 1/2" material and then glue a bit of a 1/4" dowel on the back of each. Then drill 1/4" holes in the spoil board for the dowel to fit into. Then when I want to cut a 1/4" board I’d just need to add a few of the 1/2" spacer circles.
Or maybe instead of just plain circles, they could be the Maslow ‘M’.

Do you secure your work piece with clamps or screws?

Screws… my plywood tends to warp here so I have to put screws in the field and not just around the edges. I try to avoid them with the router.

Somebody on the Maslow CNC Users Facebook group wanted some more info (BOM) about my wall mount frame, so I decided to recreate it on Onshape. And I figured I might as well add it here too.

I actually made two versions, the first has a skirt and is what I started to build, and the second doesn’t have the skirt.
Here’s the document with a skirt, and the document without the skirt. (Scroll down if you want to see a picture without opening Onshape.)

The design without the skirt is much simpler.

For the design with the skirt, I added some cutouts in the skirt so that you would actually be able to remove the work piece. And I also added/designed some spacers that fit into holes on the spoil board so that you can cut different thickness materials (as mentioned in a previous post).

I’m going to be moving in about a month, so that gives me a chance to deconstruct my current frame, and then rebuild it just like I have it designed on Onshape. I’ll make sure to upload photos once it’s all done.

Lastly, I want to add a couple of quick screenshots for those who can’t or don’t want to open Onshape. 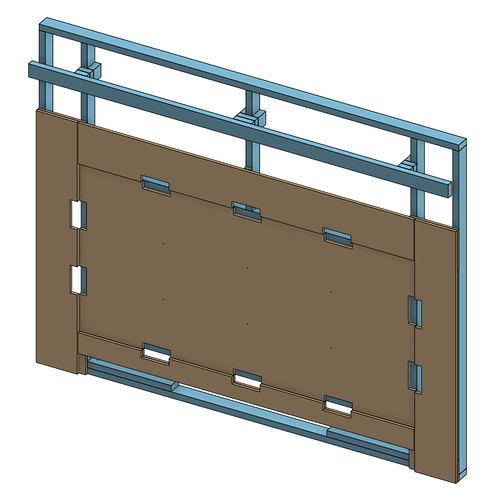 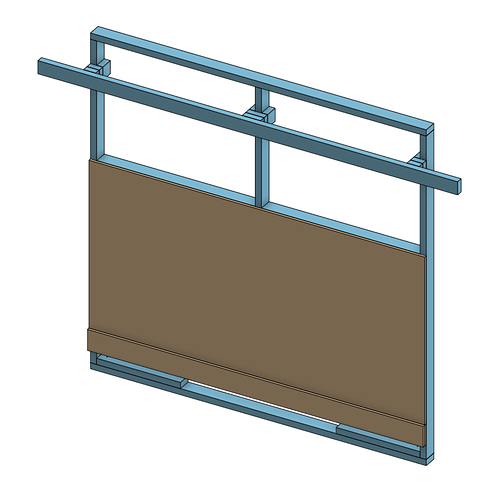 Sorry to dredge up an old thread @BradM , did you end up using your new design? Any recommended changes since then?

I did move three years ago (and again one year ago). Unfortunately I still haven’t rebuilt the CNC since I took it apart to move. But I am really hoping to get it built soon™.

Haha, well best of luck! I have a limited window to get this thing installed before I make a mess or another project pops up and gets in the way. Hoping the @EastBaySource kit goes up quick once I get it.