CAD and CAM is at lest ten times harder than 3d printing! I am amazed at the steps it takes to make something very simple. I have been trying to penetrate the Fusion 360 envelope and the parts do not move the way that I expect them to. The lengths and widths need to be checked every time you download something. Then the different types of files is KILLING me, the SVG versus DXF files. Converting files from one format to the other is not guaranteed and every now and then Fusion 360 crashes. Finally pretty much everything on Thingiverse is designed for laser cutting (laser cutting! I just bought 100 dollars worth of bits!), and I have no laser. Finally the router bits are different from the CNC bits, the CNC bits are longer from what I gather and lend themselves more to dynamic Z movement. This CADCAM thing is almost beyond for me. Gonna keep trying though. I saw that someone designed a pen carrier for the Rigid router sled, I am gonna load that puppy up and practice my routing before i start cutting plywood sheets.

I could not agree more.

The world of CNC is not even close to as friendly as 3D printing. I think it’s because until very recently CNC machines cost $30,000+ and were usually operated by a dedicated operator who’s full time job it is to operate the machine. A machine doesn’t need to be easy to use if someone has the time to learn every quirk and trick to make it work well.

I am hoping that more and more we will see machines becoming friendlier as they come down in price.

The closest thing I have found to 3D printing easy of use is Kiri:Moto…because it is a program designed for 3D printing.

I’ve been playing around with the Kiri:Moto app in OnShape to generate gcode. My first impression is that it is a really quick way to generate gcode, although the gcode it generates isn’t the best. I made a quick video about what I’ve learned so far:

Thanks for that Bar, I will try onshape and Kiri moto! Also BTW I have HUGE bits I think that smallest one I have is 3/8th, but it goes a full 3/4 inch for plywood. Is it possible I was anticipating 3/4 ply and 1/2 is really the smartest material for the Maslow community? Actually I guess we all have our own way of being right now. I am struck by the fact that the 1/4 inch bits that you have on the website only travel 1/2 inch, but the price is right, that is for sure. Anyhow I know that in the process of cam, you account for your bit size, but I am just not initiated just yet. I hope that once my wife stops looking at the bank account I can get a laser for the Maslow! I fee like my bits although long enough are too large to make anything terribly pleasing. Gonna work on it.

CAD and CAM is at lest ten times harder than 3d printing!

The CAD is pretty much the same, they call CAM ‘slicing’, but it’s the same
step, convert the 3D object to the movements that machine needs to make. For
some machines, it’s g-code that you would recognize if you compared them

I am amazed at the steps it takes to make something very simple. I have been
trying to penetrate the Fusion 360 envelope and the parts do not move the way
that I expect them to.

This is a real problem, Fusion 360 is designed for people who have been using
Autodesk for years. Try different CAD programs until you find one that works for
you.

The lengths and widths need to be checked every time you download something.
Then the different types of files is KILLING me, the SVG versus DXF files.
Converting files from one format to the other is not guaranteed and every now
and then Fusion 360 crashes.

if your workflow requires that you convert from one format to another
(especially between cvg and dxf), look for other tools that handle the format
your preferred CAD software outputs.

Finally pretty much everything on Thingiverse is designed for laser cutting
(laser cutting! I just bought 100 dollars worth of bits!), and I have no
laser.

heh, from my viewpoint, it’s seemed like everything there is designed for 3d
printing

Finally the router bits are different from the CNC bits, the CNC bits
are longer from what I gather and lend themselves more to dynamic Z movement.

router bits and CNC bits are pretty much the same. Very long bits are not going
to be useful in a normal router, they would only be useful in a CNC. Sometimes
you need to reach several inches down into something to cut it properly. You
can’t do this with a router, but could with a CNC.

don’t stress about it, and don’t waste money getting CNC bits with the same
specs as Router bits.

Remember, the Maslow is a router being controlled by a computer, so bits
designed for a router will work (if you are cutting very thick stuff, you may
want some slightly longer bits as the 3/4" plywood sled means you are further
from the material.

by the way, I’m in almost the opposite position, I easily understand CNC
machining and CAM, but slicing for 3D printing seems like black magic, if it
works, don’t tuch it, but figuring out what the right parameters should be…

Regarding the software, I was pretty paranoid before getting my Maslow kit, but about the time it arrived at the door, there was some conversation on the forum about Easel…

Video: How to use Easel to generate G-Code for Maslow CAD/CAM Software Tips

Hi everyone! I made a quick video to share what I’ve figured out about using Easel with Maslow. If you’re already an experienced CAD/CAM user, Easel will be way below your skill level. However, if you’re new to everything like me, Easel is a great way to get started. I find it runs a lot smoother and is easier to use than MakerCam, and you get the benefit of being able to save and share designs. Okay, here it is: Resources in this video: Easel by Inventables All Parts SVG

Although this topic covers converting to G-Code, I have found Easel a great starting point for Cad-Cam… it is only 2 dimensional, but it has gotten me started on a path to understanding how all this stuff works. My immediate plans are to make parts on the Maslow for cabinets and a workbench for my new shop. My past carpentry experience and design thinking centers on turning 2d things like plywood and boards into 3D items, so I am still using graph paper for rough designs and then creating the individual parts in Easel, which is pretty easy to do. I look forward to learning a 3D tool like OnShape, but first I am focused on getting the Maslow as tightly calibrated as possible.

Regarding the bits, I, like most everyone, started with 1/4” bits, which I purchased from Maslow. They are long enough to cut 3/4” ply, which for me is fine. The default Ridgid router has about 3” of travel on the Z axis, and operates on top of a 3/4” sled. With the little experience I have, the bit has to be mounted into the router so that the fully extended bit cuts to about 1”, and raises to about 1/4” above the work piece, so a total of 1 1/4”. So, the bits probably need to be around 2 1/2” long to allow for a solid mount in the router arbor and some clearance between the arbor tip and workpiece. Longer works, shorter might not cut as deep as you want.

@iltstb I feel your pain. I’m very proficient and 3D printing the opposite procedure of CNC Subtractive Manufacturing. 3D is Additive and I was part of it’s inception from professional to home kits. The original software and hardware were hard to work with. On my original MakerBot 8 years ago to get a proper print I have to scale every object up 1.089. This is why some people complain my old files on thingiverse are too big.

My point is you are at the beginning of something. 8 years from now it will be much different. There are differing levels of product and expensive is not always the best gauge of good. This process originated in 1950 as in any culture there are many changes over time.

The good news is with perseverance you can achieve your goals. It will be work but it is very rewarding when things work.

I’m very fond of a neutral CNC overview by a friend of mine Winston Moy. 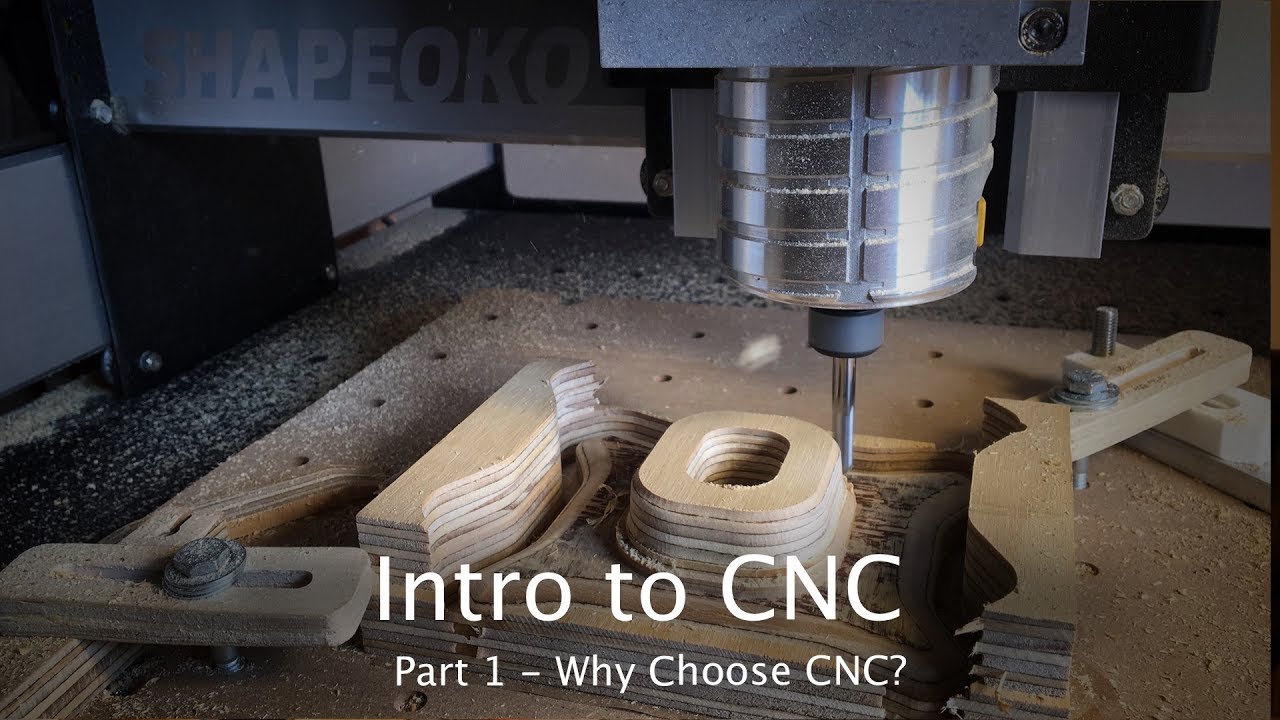 I’m a big believer in the value of digital fabrication, not only in empowering Makers, but also educating. CNC is a perfect trojan horse for learning fundamentals of material science, physics, and programming. Why CNC is such a niche market compared...

In the end the one thing I hear everywhere I look is work flow. This like many businesses workflows is individual. What works for one will not necessarily work for another.

One source listed different tools by Architecture, Mechanical, Art. There is no one right Cad or Cam program. There is what others know and can provide direction with. You need to find the tools that work for you and develop your workflow.

I really am a few steps a head of you. I happen to work with professional CAD and CAM & CNC operators. Just today a Professional CAD guy came by to play with the Maslow. When I told him he would need to CAM a file and haded him a book on getting started with CNC with walk throughs he quickly appreciated that it was going to be more then just opening something an clicking a few times. It took knowledge and skill he didn’t yet posses. He commented “Now I see why operators always have to run the files through another program.”

My goal here is to hopefully inspire you to dig in a little harder and find a workflow.

I’m still finding my groove. I have too many tools to choose from. In time they will dwindle down to the handful that work for me. That will be my flow.

I totally thought that Easel was going to get it done for me and, well it didn’t. That is when I went to Fusion 360, now I am trying free CAD, gonna get a CAD program that works for me soon. I gotta, I would really like to make soemething besides my sled with my machine. Thanks for the info, I appreciate it

Keep your head high. I just received my Maslow in the mail and am sorting through all the different tips of the forum as I prepare to build my frame and begin working my first projects. I too am finding that there are many programs out there to work in.

The biggest help so far, for any of these CAD/CAM software suites has been Youtube tutorials. People have made a number of helpful guides if you’re willing to spend 10-15 minutes watching them build up a simple design from nothing.