I’ve been playing around with the Kiri:Moto app in OnShape to generate gcode.

My first impression is that it is a really quick way to generate gcode, although the gcode it generates isn’t the best.

I made a quick video about what I’ve learned so far:

you say that the g-code that it produces isn’t the best, how does it compare with makercam?

Kiri:Moto adds a lot of extra zaxis moves and a TON of lines of Gcode in the corners which slow the cut down. I would say that Gcode from Kiri:Moto probably takes almost twice as long to cut as Gcode from MakerCAM, but it’s much much faster to generate Gcode in Kiri:Moto

Isn’t there a Gcode optimizer program mentioned somewhere in the past few months? I wonder if post processing the Gcode could give us a clean solution? 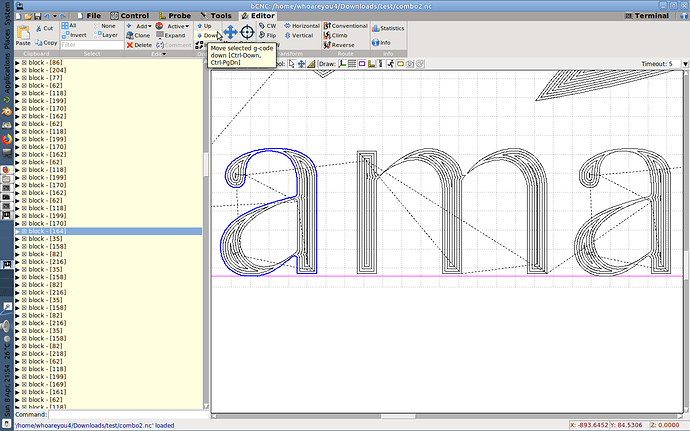 That’s a great tool! The editor is just the thing for addressing @Bar’s observation about the order of cuts.

could you make a sample g-code and post it as a bug to the kiri:moto forums?
That will give them something to work with to troubleshoot the problem.

I think they are working on it so I would expect it change soon. They have a bug open for it here:

when you said it was very slow in the corners, and takes about twice as long to
cut, that sounded like a lot more than just the tab cutting.

Was I misunderstanding you?

No, you are right that is an issue also. The tabs one is a bug on their end, I’m going to treat the slow down in the corners as a bug on our end and focus on speeding up the rate at which gcode is processed.

It’s silly that they give us 200 lines of code to cut a half circle, but if we process them quickly enough it shouldn’t matter.

there should be an option at their end to set the resolution of a circle to
avoid tiny movements. So I still think you should file a ticket with sample
g-code.

That said, you are correct, a lot of things generate lots of tiny movements, and
we should handle it better.

I think this should be part of truncation of digits, if truncating the digits
makes the start and end of a move be the same, that move should be skipped (with
the special case of arcs as has been discussed in the past.

Here’s a follow up after using Kiri:Moto for a little while. 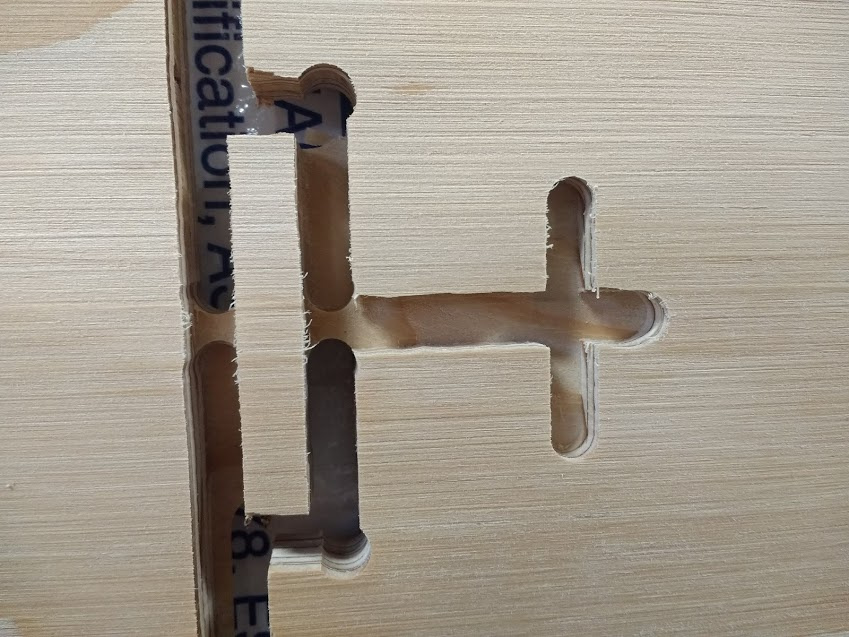 Also, all my slots came out too wide for the parts which are supposed to fit into them, probably an issue on my end with setting up the pockets, but still an issue.

I have however found a new way to use kirimoto which I really like so far which is to use the laser cutter mode to generate a .svg file right from OnShape. Once I have a .svg file it’s easy to generate gcode in MakerCAM (or easel if you prefer it)

Here are the settings I used to generate a good looking .SVG file which I opened in MakerCAM 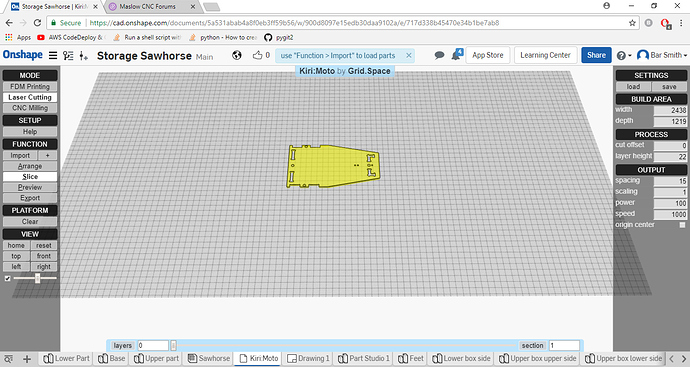 Width: Bed width
Height: Bed height
Cut Offset: The program will offset the cut slightly from the edges of your part to correct for the laser beam width. We don’t want this because the CAM program will take care of the bit width later so use 0
Layer Height: The program will automatically try to split your part into multiple layers which you would stack to make the final thing. It’s a cool feature to know about, but if we just want one copy of the part choose a number just a little less than the thickness of your part
Spacing: This is the amount of space left between each part. There needs to be at least space for the bit to pass through between parts
Scaling: Scales up or down the drawing. 1 leaves it normal size
Power: No idea what this does, ignore it
Speed: No idea what this does, ignore it

Hey Bar you mentioned setting up pockets. Were you ever able to get that to work in Kiri?

I haven’t played with it too much more since then, I’ve gone back to using makercam

What programs do you guys use to create your designs? Also, which would be a good free one for a beginner to learn on?

Fusion 360 is a lot like onshape and has built in cam. It’s also free for non commercial use.

thanks , i will look at both those.