Calibrating the Machine in Ground Control

Hello - Currently running Ground Control 1.02 and after trying the automatic and the manual machine calibration several times, the final sled location is lower than the center of the board working area. I recieved the same result on earlier versions of Ground Control . I have also tried manually measuring distances and entering them in the settings. 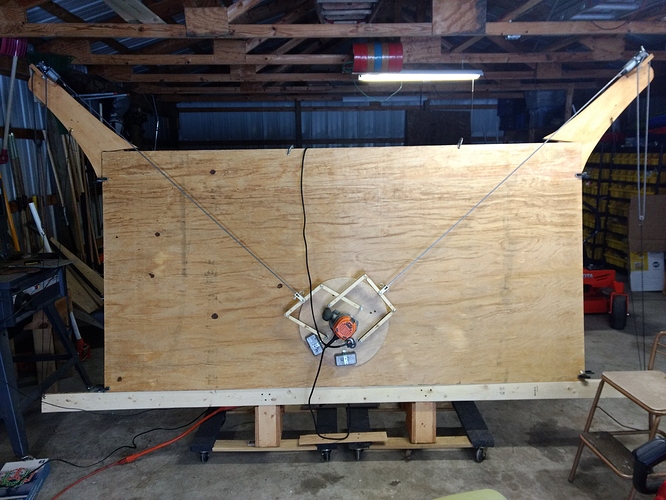 Also, the linkage kit doesn’t seem to be installed correctly in the photo. It looks like it was “rotated” around the center (probably to clear the handles) but the lower left arm appears to be hitting your left weight. I suspect that this will cause a serious problem. I recommend removing the handles and putting the linkage kit on so that weights cause the router exhaust to be straight down.

Also, the left chain and linkage doesn’t seem to line up with the router bit. if you draw a line extending from the chain, it should precisely hit the router bit and in the picture, it appears to miss it (below). Are all the linkage support posts the proper distance from the router bit? Maybe @pillageTHENburn can take a look at the photo?

the linkage kit doesn’t seem to be installed correctly in the photo.

The screws seem too tight. the arms should be able to move without resistance when assembled

The calibration for triangular kinematics is going to be changing significantly
this week, greatly simplifying it and increasing it’s accuracy. I would suggest
waiting a day and trying again with the new software (after you fix the links to
rotate freely)

Also, the linkage kit doesn’t seem to be installed correctly in the photo.

Yeah, something is fishy. That left linkage should not be skewed like that. If the C and D crossover is rubbing check that things are all square (and on the same plane). Something you can do to help it along is sand the C bar so it’s thinner. This will not detrimentally affect strength but will reduce friction here if that happens to be a stuck point.
It sort of looks like the sled anchor points where D and F meet the sled are wider than 9" but it also might be an illusion. I’d definitely check that.

The screws seem too tight. the arms should be able to move without resistance when assembled

Yes, the arms should move without resistance however the bolts should be able to be tightened quite snugly. The bolts that hold the linkage to the sled should clamp the nylon bushings only, they should not touch the wood (of the linkages). The wood linkages move on the bushings, the moving contact point is between the wood and the nylon, not the nylon and the bolt.

If it’s doing this during calibration, it could be throwing the calibration
off…

madgrizzle mentioned that the linkage kit doesn’t seem to be installed correctly. Would someone be so kind and post some pictures of a correctly mounted linkage kit?

camera angles can be misleading.

One problem we know you have with your kit is that the left side is not moving
properly, it;s clear from the picture that if you were to extend the line of the
chain, it would not go to the bit.

This could be that the bolts are too tight, or that the two sides are rubbing
against each other where they cross.

It’s not completely clear from the camera angle, but it almost looks like the
mounts to the sled are not right. If you draw lines from the mounting holes,
they should form an X with the center at the bit.

Thanks all for the advice. If someone had a photo of a correctly installed linkage that would be greatly appreciated. I believe the bolts are loose and move freely, but I can try and center them better so that the lines cross at the router bit. Also looking forward to seeing the triangulation calibration updates. 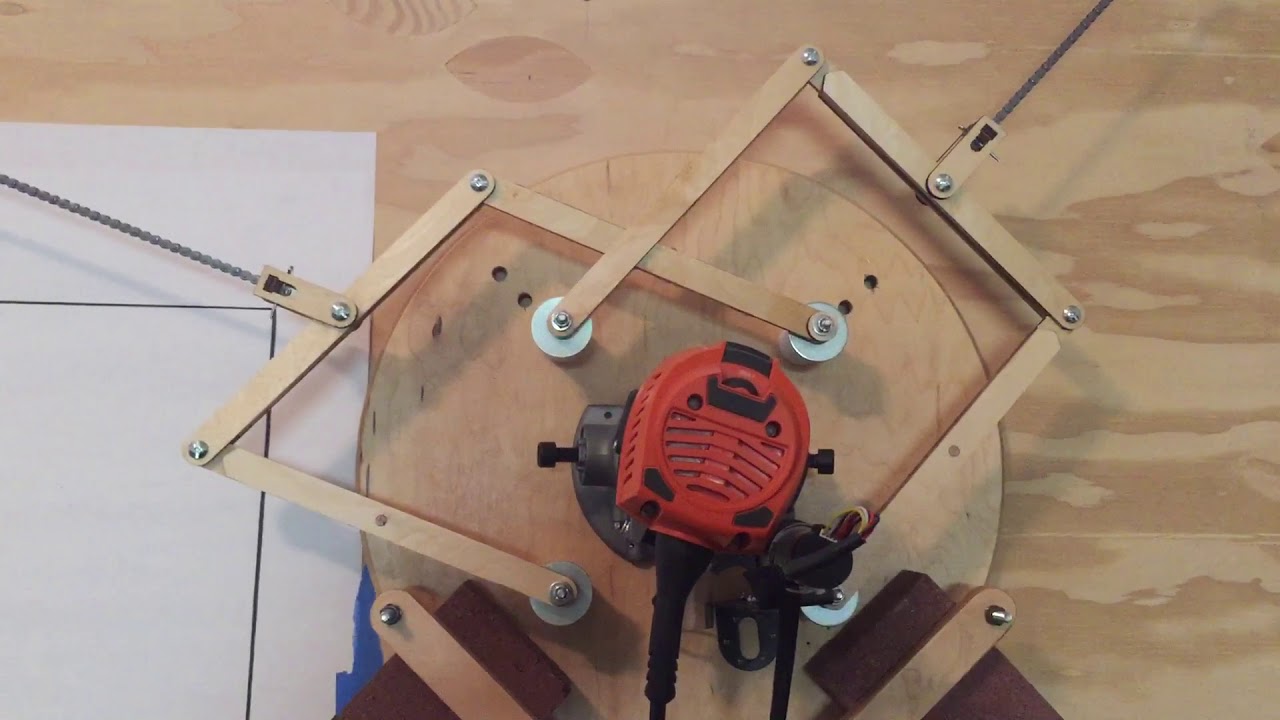 Found this via google. Notice the position of the weights with respect to the mounting points of the linkage kit with those in the picture you posted. Also, notice how if you extend lines from the chains they intersect precisely at the router bit. This is critical to achieve.

Something important to consider is where you mount the Z-axis as it can interfere with the bottom right pillar. If you rotate the Z-Axis away from the pillar too far, you can end up with the Z-Axis motor bracket interfering with the router’s up-and-down movement when you try to extend the bit down low. I wish I had taken a picture of the problem. I ended up putting the Z-Axis back to it’s logical, normal position and was able to pass the linkage pillar’s bolt through the hole in the Z-Axis mounting bracket.