Wow.
So, I got the frame up and popped a couple of spacers behind the workpiece and was excited to start calibrating!
When I went to the edges of the workpiece it was waaaaaaaay off. I plugged away at it and accidently changed a setting which went the machine up up up up. It bent the ring and pulled one side out of the sled.
Some creative bending an a re-screwing slightly offset from the damaged holes, and I’m back in action.
This time calibration went great and it was 8mm on the first shot!
The z kept getting soft limited, but I figured that out.

seems weird that the first steps need stock to be on there, but I gotta take it off for the Z to zero it on the waste board then put it back on again. Shrug.

ANYHOW
I then went for the precision calibration. Pressed topleft and waited. the sled moved and as it got close to where it should go… The chain popped of the sprocket, the M2 hit the ground and the straps holding the 2 bricks broke.

I’ve found that when the machine is on the far left or right, the motor thats ‘pulling’ the machine starts clicking as if the chains not quite lined up. Is there a fix for this?

your beam is not out far enough to keep the chains parallel to the work surface. you set the chain height on the sled by the ring height so when the chain holds the sled, the sled lays at 15 degrees. then you put the beam out from the work surface enough to keep them parallel to the work surface otherwise when you get to where the sled is close to the motor, it will try to shift gears like on a bike. You want that chain striaght with no side pull. I think I showed adjusting the beam in one of my videos, but it probably wasn’t super easy to follow. I’ll refer you to this alignment diagram: 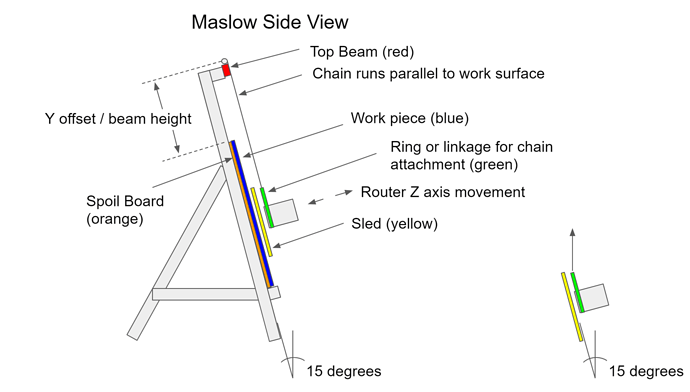 and this sled hang picture (#4 is desired): 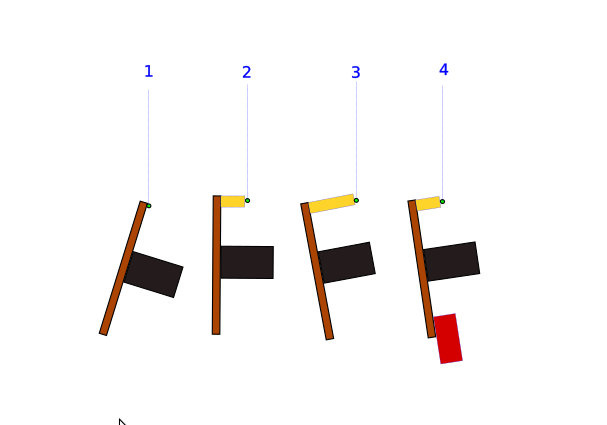 Aaahhh, I thought it might be something like that.
The ring is set to the very top, so hopefully lowering that will be enough to get the angle I need, and I won’t need to pull the frame apart.
It’s only clicking at the extremes.
I’m away over the bank holiday, so this’ll have to be a ‘When I get back’ jobby.

Right, Update, I did some measuring, and I think I can get away with lowering the ring onto the bottom slots. Going forward, I will modify the frame and pull the top-beam out a bit, and get the angles a bit more accurate.
HOWEVER! I bit the bullet and bought another Ring set. Since mine dropped and bent, it’s not sitting right, and the more I try tap it into shape, the less its getting there. I figured I’d just get a new one.
Gonna sit tight until that arrives,

except in the top corners (where the chain angle is the worst), it’s normally
more important that the ring be at the balance point of the sled than that the
chains be parallel. You really want both, but if the ring is too close to the
sled, the top will tilt away from the workpiece at times.

getting flatter eights (sheets of iron vs bricks) will move the CG closer to the
sled, letting you put the ring lower.

This is worth it… right?

I adjusted the top-beam, and the middle beam so everything is at 15 degrees and lowered the ring a bit. No more clicking, so thats good.

Calibration says that my stock was 6mm askew clockwise. So I re-did the bottom support beam.
I got the calibration to 7.6mm not perfect, but hey.

I then went to precision calibration. Fired everything up…

Aaaaand the Z=axis started lowering waaaay before it got where it was going. Then lowered so far that the nut-part you spin to change the bit cracked through the dust-shield, which slowed the bit just enough to cause it to snap in the stock.

The challenge here is that there is no way to set the ‘Starting’ Z-axis when calibrating a new machine. It keeps hitting ‘Soft limits’ when its in the middle during the calibration stage. The only way I found around it is to quit out of calibration, and move it bit by bit, setting zero, move. Setting zero… move.

So far, I’ve broken/damaged the ring, the sled, the straps holding the bricks, the dust shield and the straight-cut bit.

I’m looking at all the guides I can find, I’m using as much common sense as I can but it seem like every time I try to get this thing working, something breaks.

::EDIT::
I’m only now thinking that this is probably what lifted it off it’s chain last time

Another day another attempt.

So I went RIGHT back to the frame. Re-measure everything. Because UK wood isn’t 2x4, The stud mounts weren’t sitting flush as the top edge/corner wouldn’t allow it and therefore the angle was all squiffy.
I popped a small rectangle of 12mm ply on each stud-mount screw, and that sorted it. Whatever way I measuree it, the Makerverse ‘Canvases’ are not sitting in the same place and so the middle looks off-centre… Shrug - I got them to the right angle and screwed them in.
I got rid of the edge and top ‘skirts’ and put in a 12mm skirt on the bottom to hold the stock. I can add edge skirts later.
I then did the WHOLE calibration again including Chain length. All went well (Although Z-Axis was being annoying, so I skipped it for now)

I popped the stock on there, and started calibrating… 76mm off. And this carried on for ages.
I then spotted something - When the MakerVerse asks for ‘Wasteboard Size’, it’s assuming that your wasteboard is the same size and is in the same place as your stock.
So I nipped back to the Wasteboard tab, and set it to the Stock size I put in place. Boom - 17mm off.
Much better.

I went to the Edge calibration again, and started just doing 1 corner at a time. Move, measure, set. Move measure set. Then the server dropped, and I realised the beep was annoying me so I left it for the night.

Why can’t the calibration just be 'I jog it to the edges, the press ‘Set’?

Why can’t the calibration just be 'I jog it to the edges, the press ‘Set’?

I’m not 100% up to date with how the makerverse calibration is working, but the tricky part is that the math to relate the lengths of the chains to the XY position is pretty complicated so just knowing where the edges of the work space are isn’t enough to let the software figure out what it needs to know. What it really wants to know is exactly how far apart the motors are. The tricky part is that measurement has to be very precise, much more precise than it’s possible to measure by hand.