I had considered that, but wasn’t even sure it was a thing. Ha! Thanks!

My safety tip:
Everyone should have one of these near their Maslow, $20 at the local hardware store: 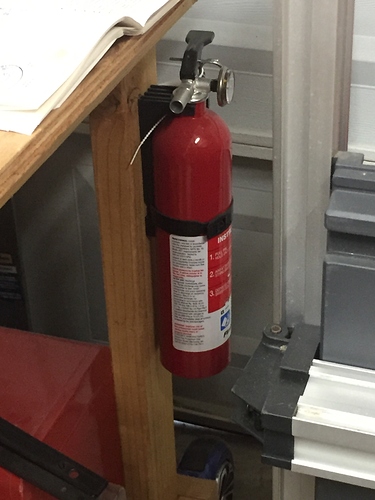 My dumb mistakes:
One time, while trying to troubleshoot ongoing z-axis issues, I told GC to move the z-axis up 3 mm (or, so I thought). Sometimes I have the GC computer close by for convenience while homing or zeroing the machine, but this time it was about 4 ft away. I walked over to the router to watch what it was doing. Stupidly, I just kept staring, wondering what was wrong, as the router rose ever higher and the bearing on top of the clip hit the router housing. Then I became alarmed (about time, idiot), ran over to the computer, fumbled around on the trackpad, and finally clicked “stop”. The motor was so strong, it actually damaged the router housing so badly that I had to get a new one. Afterwards, I realized that I had actually input a 3 inch move, not a 3 mm one.

My $0.02 for new Maslow builds: Putting a bungie or a big rubber band over the top of the router should be a regular part of the build, not an optional step. If z-axis movement/accuracy is still an issue, then put a thin washer between the z-axis screw and the router housing. And, if that still doesn’t resolve your problems, put a bearing on the clip, BUT be absolutely sure it is accurately centered, and be extra careful when moving the z-axis with GC.

I agree that the bungee is very important for stock builds, however, I would make sure that it is not too strong. If it’s a very strong bungee then it will break the router free from the housing and plunge the router into your work piece until it hits the collet in which case you either destroy your bit and work surface or even scarier you start a fire. I have had some close calls.

You make a very good point. I did a lot of studying before I implimented my fix. I use three mini bungees hooked on the supports for the ring system. They are not at their max tension and I release the tension when not in use. 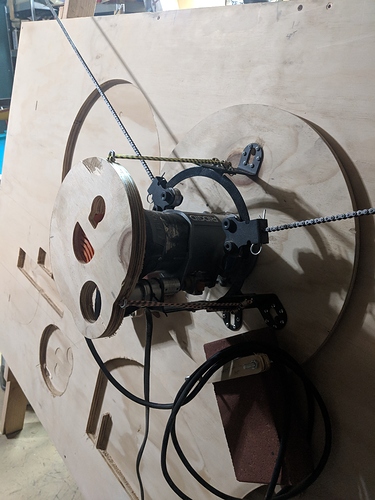 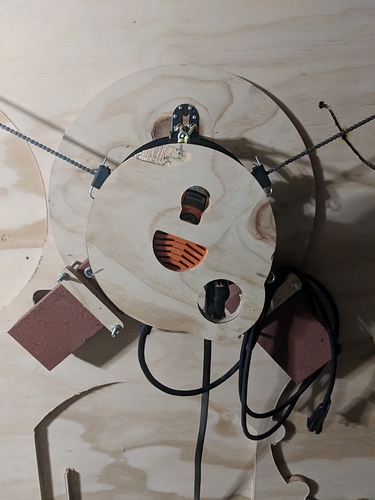 That’s genius. Would you mind sharing the file for that please?

Here is a link to the post with the URL to download the cut file for the router hat.

@rayner_tavera requested the cut files for the router hat so here is the svg file. You can modify the toolpaths for your own application. I highly recommend adding tabs were applicable. FYI the pocket that sits on top of the router is not perfect I had to make a remove a lititle material with a dremel (sorry, it is free lol). https://app.box.com/s/sgppkw5w498ij69bwhnqbjij6egxttae

I have had mine set up like this for a while, and recently the gorilla glue didn’t hold it any more and it was just sitting behind my z-axis clip spinning. I took everything apart again and glued it back up just to have it break again. any suggestions to keep it from breaking off of the z-axis clip?
I got it back up and running after drying overnight and i just noticed again that it is loose. it is following the z-axis clip but not keeping it at a 90 degree anymore.

I have had mine set up like this for a while

“This” meaning with the bushing gorilla glued?

My advice, scuff both surfaces, clean with acetone and glue with JB weld. I tried several glues but JB has not failed me. You may already know this but watch out for the default travel height in makercam, it will jam the bushing into the top carrier of the z axis screw. The default is .5 inches, I set it to .2 inches.

Had the glue bond break 3 times and finally secured it with spare screws from the build kit. The first time I glued it held the longest but when it broke free it took off the paint finish. I re-glued scuffing the surfaces but this seemed to make things worse as the bind to metal was weaker and broke on first use. Originally using Permatex Steel Weld epoxy and switched to JB weld on 3rd try which did hold better but only lasted 3 uses.

Drilling was not easy as the holes on the bushing barely have enough material to drill into and can easily slip of the side. Pretty much need a drill press to do it. Also had to grind away some material for the screw heads to fit. There is good thickness in the height adjustment clip to tap the screws if you position them roughly at the 4 circular depressions. 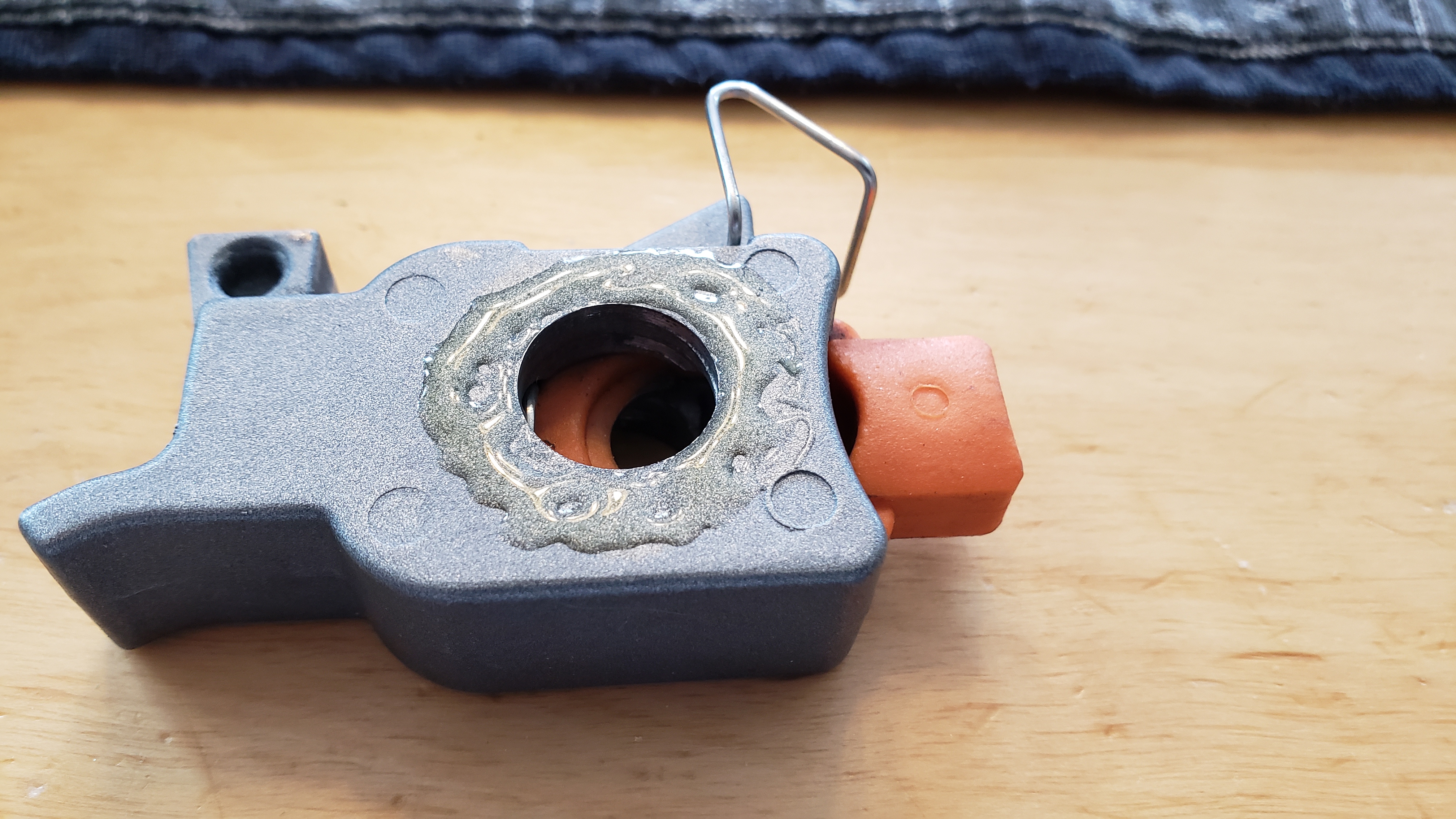 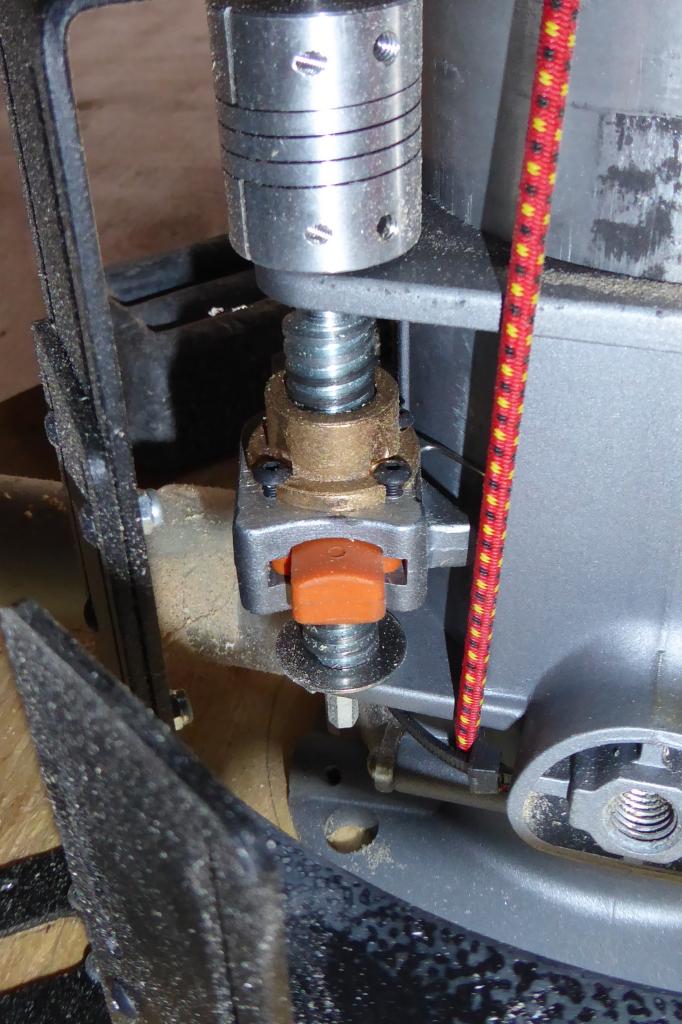 Yes, “This” meaning the bushing with gorilla glue, a light bungee, and a washer.

Thank you, I will try this. And I did have a close call with my router high going too high, but I do have it set to only about .2 inches. I forgot to rest my z-height resulting in the close call. I was able to stop it before it hit the top carrier.

If the JB weld does not work, I will end up using this tactic. Did you thread the screws into the z-axis clip? Or just drill a hole slightly smaller so that it threaded itself? This option seems to be a fail safe to all the other options as screws are much less likely to break!
Thanks again for your input!

Welcome to the forum, @Nidal_K !
I wonder if it deteriorates 3-d printed material as it sounds like I can use lube for the YAZAM (Yet Another Z-AXIS Mod). Wondering what would work the best for it…? 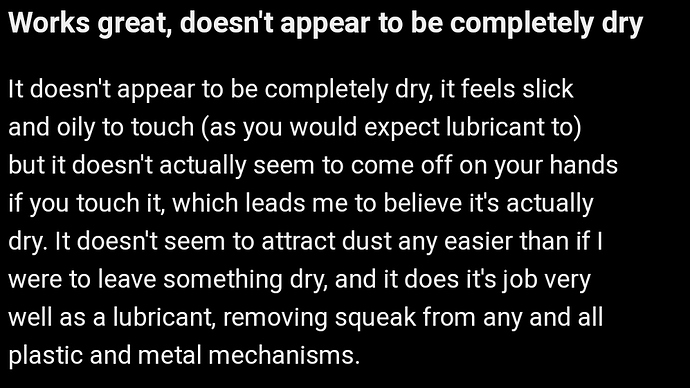 Finish Line Dry Teflon Bike Lube, essentially wax dissolved in a solvent and a 3D printing favorite lube. Also the butt of many lube your rods slightly off color 3D printing jokes. Used it for years on my 3D printers after testing several of the popular libations, and it’s handy to have around for various things that want to go squeak in the night. Heck, even use it on my bike chains (replacing TriFlow/TriFlon) to help keep the sand from sticking.

I use Blaster Dry Graphite Lube. I highly recommend it.

Thanks everyone!
@ShadyG , that’s good for 3-d printed stuff?

The Amazon reviews say it works well but is very messy. Do you find that to be true?

It sounds like the old school non aerosol graphite lock lube, powdered graphite in a light solvent. Used a lot of that stuff but it also made a big mess that had to be cleaned up.

Sound worth having on hand for locks and high temperature use