I have made numerous mods to the original Maslow frame which have improved the frame, but I decided to add a counter weight system after reading a number of ideas that have been posted. Using pulleys for the counter weights has been used and seems to work well. I decided to try a different approach with the material that I had on hand. The photos that I have posted are the best way to show the system that I came up with but I will try to describe the system. The material required is 2 - 8’ 2x4’s and 2 - 2.5 lb barbell weights. I used the S hook that connects to the bungy cord, to hang a 2.5 lb weight on the chain. I routed a 1/4" slot in the 2x4’s that the weight slides on to act as a guide for the chain and the S hook. I moved the end of the chain down to the top of the 2x4 for the anchor point. The slot in the top of the 2x4 also provides a guide for the chain to the motor sprocket. As I first said the photos will probably give a much clearer picture.
The system seems to be working well but may require some more tweaking. 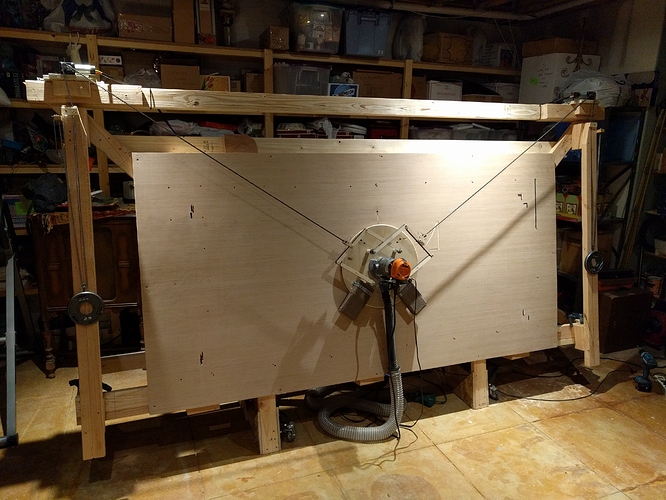 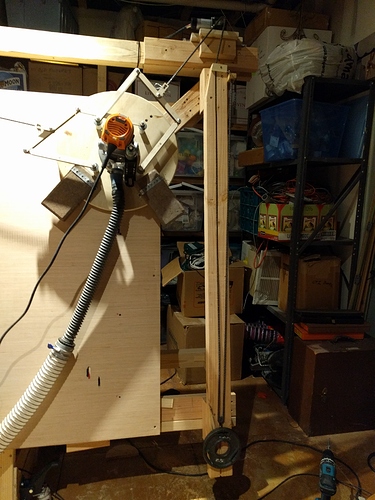 I was thinking the same kind of thing to decrease strain on the motor. I’d like to know that works out for you over time.

one thing about the weights, if the weights put more tension on the chain than the sled, then the gears move without the motor moving (backlash on the gears), and the position ends up being incorrect.

the gears move without the motor moving

I would think that the worm gear would prevent this. or are you thinking just the inter gear backlash?

I would think he’s talking about backlash of the chain to the spur. I agree, it would have to be a right balance. (Or unbalance as it were). You could lighten the load on the motors, but do not want to balance the weight on each end of a chain. The sled needs more. How much more? Trial and error…

I would think only enough to keep the chain from wrapping on the sprocket. A couple pounds should be plenty

The total weight of the sled is 25lb and the counter weight is 2.5 lb. Doesn’t seem that backlash would be a problem. I have not seen any evidence of this.

there are 4 gears after the worm gear, they all have backlash (or will over time
as they wear)

when you are at the far side, most of the weight is on the far motor’s chain,
the tension on the chain stretching all the way across the machine is very low.
that’s where you will see problems

That should be plenty.

that’s where you will see problems

The weight really only needs to guide the chain. Everything on the other side of the sprocket is taken care of by the sled weight, including sprocket backlash since the chain is under constant (if not uniform) tension.

they all have backlash

weight on either side of the chain will not eliminate the backlash in that portion of the system. That is, with the current set up, an unavoidable part of the system.

I’ve been using 2.5 pound weights in the top-feed configuration for quite a while, they work well for me. I use them in the bottom-feed configuration too.
Stretchy string is a reasonable method for a starting point, you don’t want to ship weights all over the world. Counterweights make a good customization - low tech, inexpensive, and easily reversible.

The normal maslow doesn’t have to worry about backlash because the pull on the
chain is always from one direction, when you add pull on the slack side of the
chains, you run the risk of changing this.

Yes. However if the weight on the sled size is significantly enough more than the slack side that should not occur. I’ve seen that heavier sleds help with chain sag and other issues, but too much and the motors stall near the top middle. So in theory adding some counter weight can allow a heavier sled and those advantages while reducing the strain on the motors to manageable amounts.

Of course this increases strain on the shaft and motor mount, but if this was worth it, it could be supported by an idler sprocket with bearIngs to take the direct load off of the motor shaft.

No idea if any of this would be worth it, need my Maslow first, so this is all just theory from someone without a Maslow.

what you are missing is that when the sled is at the far bottom corner, one
chain is at 10 degrees from vertical, and that chain is holding about 87% of the
weight of the sled, so the tension on the other chain is very low.

Working with 87%, then a 2.5 pound weight should be ok as long as the sled plus one chain weigh more than about 19 pounds.

I like how you think - I am doing the same with my Maslow - using weights in place of the elastic and guides for the weights (mine in metal because that’s what I have) I think this also serves to stiffen the entire structure. These changes have allowed me to go without the chain guide (at the top) and any skipping I might have had is now gone.

Thanks, the counter weight system has eliminated the occasional skip that the Maslow had.

Nevermind the rust - it was all re-claimed/free 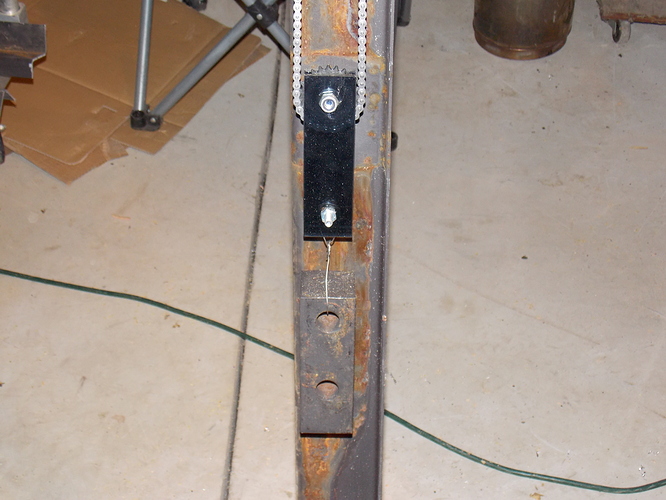 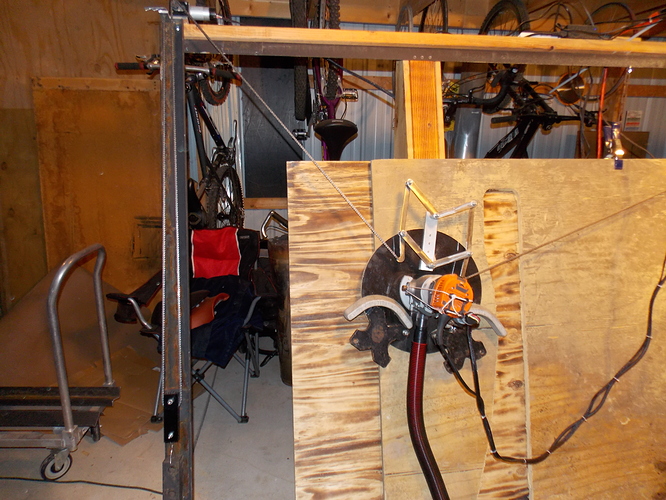 I 3d printed the gears, but haven’t figured out a more elegant solution for attaching the weights