Does ground control know when I need to change size of the tool (1/4 to 1/8) during the cut?
What is the best way to get this done without messing up my cut.
Do I have to re- establish zero for the new bit?
I’ll be using maker cam for the G code. Any help will be appreciated

If you have different size tools set in MakerCAM the machine will stop automatically when it is time to do the change.

The process isn’t as smooth as I would like it to be. I wish there was a pop-up on the screen telling you to make the change, so I’ll be cleaning up that part of the code soon.

Another option is to save the paths for each tool in separate files when exporting from MakerCAM. As long as you don’t move the home position they will be aligned

thanks @bar, what about resetting zero for the new bit?

that should be part of your tool change process (resetting Z=0) the rest of the machine shouldn’t be needed and will retain its location.

thank you @mrfugu, you guys are the best…

The process isn’t as smooth as I would like it to be. I wish there was a pop-up on the screen telling you to make the change, so I’ll be cleaning up that part of the code soon.

I’d love to see other G-Code additions/conditionals that are similar: Comments, Sequence #s, M-Code Notices, etc. for the User.

“Machine Operator” is the most appropriate term here, and informs the kind of notices I’m trying to describe.

These should all throw large notices up to the Machine Operator.

1 more question, hopefully I’m explaining this right, I did a test cut away from center and it looks real good,
now can I just move the image to where I want it cut and use the same g-code I used in the test cut or do I have to redo g=code for the move?

Correct ( I think). G-Code is self referencing from it’s defined ‘home’. All that is done in CAD, then in GC, you can move your home to anywhere on the work surface (for example, “1’ up from center”). the file doesn’t know that and when executed will cut from it’s ‘home’.

If the file’s home is the normal machine home (ie: the center of a 4x8 virtual surface) then using the example above everything in the file would be ‘transposed’ by 1’ towards the vertical top of the work surface.

so your saying when I reposition my image to my home position ( which is the same as the center of the work area) I should redo the gcode correct?

Sorry about being a pain but I’m so new to this I just want to understand what that all means.

so I don’t have to generate a new gcode for the reposition of the image ( what you call the file) because the files home position changes to what ever I set Maslow’s home position is (center of the work area)
does this make any sense to you? remember I’m in 1st grade compared to you

In short yes. however be aware that ‘home’ in the CAM software can usually be ‘anywhere’. its something you create (intentionally or unintentionally) when creating your G-code, there are many ways to generate G-code is my main point. It’s wholly seperate and completely ignorant of the Maslow, and GC.

Similarly, Maslow/GC is only aware of the G-Code it’s been programmed to respond to and will give your file ‘a best attempt’ which in many (most?) cases is completely fine.

the cam program I used for the gcode is makercam (I think its a cam program that you mean)
so all I have to do is move the image in makercam where I want to cut and save. then open it in gc to cut correct? 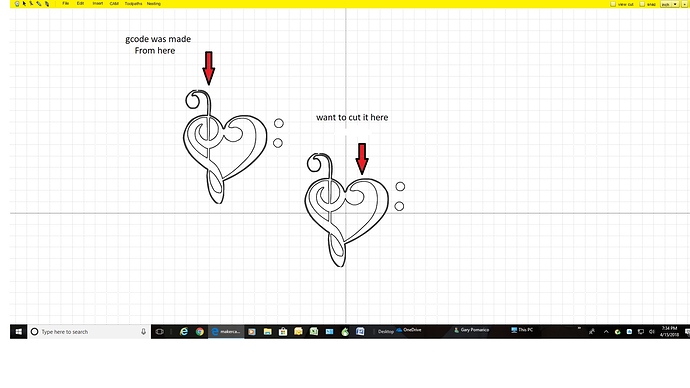 I am not too familiar with MakerCAM, I use Fusion360, but most likely, yes.

Whatever is 0,0 will most likely be ‘Home’, and your image will be laid out in reference to that.

It can get more complex, but it probably isn’t in this instance.

thank you some much for your help @mrfugu…

No sweat, this is all new to me too in the last year.

To try to help clarify in case there is confusion. What you are doing in makercam in that picture is repositioning where the cut is made with relation to the gcode’s home (0,0) position. By moving it as you did, it will be centered around 0,0 (previously, it was to the top left of home). When you load the modified gcode into GC, it should appear centered around GC’s home position. You can manually move the sled around the plywood to a particular spot (using those arrows in the top right hand corner) and when you get to where you want the shape to cut, press “Set Home”. This will move GC’s home to that spot and when you hit the play button, it will cut it out at that location.

Depending upon what I’ve already cut from my plywood, I might make the cut in makercam to be in different positions. Let’s say I had cut out a circle on the right part of a piece of plywood and I wanted to avoid it when i cut a star, but not bee too wasteful. So, I might set the image in makercam as shown below and then move home to a spot just to the left of the circle. That way, I know all cuts will be left of that spot. If I had the star centered, it wouldn’t be as easy to do (would have to do some measurements). 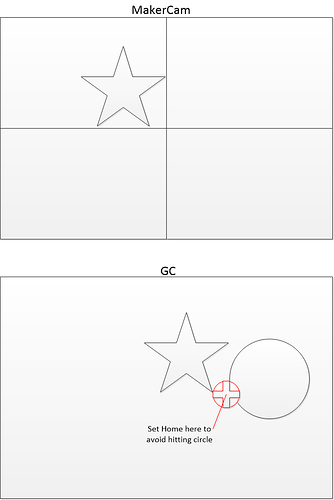 got it ! thanks @madgrizzle and @mrfugu for all your help, ill get to learn this sooner or later.