I’m expecting my Maslow in the March shipment, and was wondering if anyone has been cutting the paper faced foam board (like flitetest.com sells for making RC airplanes - https://store.flitetest.com/foam-board//) )

I haven’t seen people using a router to cut this foam board, but have seen people use a cnc mounted drag knife, such as http://donektools.com/product/d4-drag-knife/ . Seems a bit expensive to me, but maybe there is a cheaper option.

It also cuts beautifully with a laser so something like the elcheapo laser diode would probably work quite well: 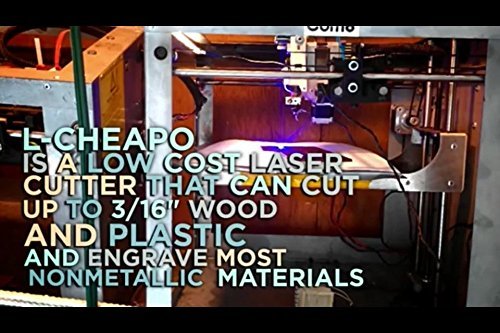 I’ve been looking at lasers. I just have much more on my plate before I can dive into it.

L-cheapo now has a 8w laser diode. I think I will definitely look at getting one for the Maslow. I’m thinking 3D printing an adapter so it can pop right into the rigid base for a quick swap.

Is there any chance Pwm is available to control the laser and could be added to ground control?

Yes, we have aux pins which are available as PWM outputs, and I think that the one which switches the router on and off is already configured for PWM and should turn on and off at the right times, but I would have to check…so yes it is possible and may already be supported

we have aux pins which are available as PWM outputs

I don’t think that’s so… it is something we could do in a future board, though - there are 3 PWM pins available on the 36-pin end connector of the Mega…

I will have to double check. I think the option is to short out the line on the laser will turn on at full power for simple on off. But pwm is needed to control power level so for etching and such that would be ideal. I’ve yet to look at ground control so don’t know how easy it would be to add features to make it work well for a laser cutter application. The new 8 watt laser is pretty reasonably priced now so would be a great add on.

8w at maslow speeds could be interesting. just remember that we don’t have the
technology to replace eyes yet and implement the appropriate protection

the one which switches the router on and off

I stand corrected - this pin uses the Arduino Servo library,which implements a form of PWM. As implemented here currently, the pin is configured to drive a hobby servo motor which would flip a mechanical toggle switch. Checking with a meter, it looks like the PWM frequency is around 50Hz. Though servo motor control can be used for aiming a laser, I’m not sure it could be used for laser power control.

I had an original L-Cheapo. Worked great until I killed the laser diode, which was all my fault. You can get diodes, drivers and such from DTR’s shop too. I’ve got nothing but good things to say about him.

I have one of the NUBM44 diodes that DTR sells. It is a NICE piece, can deliver something north of 6.5 watts at full power, like 5 amps. I’m only running it at 3A because that’s plenty for what i am doing. I can cut 3mm fir in a single pass at 100 mm/minute. The main change I made is to use the JTech High Precision lens, it focuses much more tightly than the G2 lens. When focused, the NUBM44 has a dash shaped beam with a typical lens, not a dot. Definitely the best $20 I have spent. I use a BlackBuck 8M as a driver. They work well, but soldering to them is not for someone without good skills and good eyes. PWM control has been flawless though.

Depending on what you’re cutting or working with, the Maslow might not move fast enough to avoid scorching your material. When I raster-etch, I run the laser at ~3000 mm/minute on a softwood ply, a bit slower on hardwood. The Maslow should work fine at cutting speeds though, those range based on the material, I can cut a dense synthetic suede at 250 to 300 mm/minute, 3 mm fir is 100 mm/minute.

G Code will also be a challenge. The spindle normally doesn’t turn off on a CNC when the bit is clear and it is moving to a new part of the cut. If you do this with a laser, it will leave stripes all over the workpiece. GRBL 1.1f has a laser mode which works very well, I’m pretty sure something could be implemented similarly with Maslow’s firmware, but that level of coding is beyond my ability.

Lasers are still very much a vertical learning curve for me. The requirement for eye protection is no joke. Be safe.

Welcome to our group. What 3D printer are you using?

Thank you @Bee. I look forward to being a part of this community, I’m very impressed with what I see so far.

I’m using a Tevo Black Widow. My other printer is an old Tinkerine Ditto from when they were first starting up.

the one which switches the router on and off

I stand corrected - this pin uses the Arduino Servo library,which implements a form of PWM. As implemented here currently, the pin is configured to drive a hobby servo motor which would flip a mechanical toggle switch. Checking with a meter, it looks like the PWM frequency is around 50Hz. Though servo motor control can be used for aiming a laser, I’m not sure it could be used for laser power control.

I realize this would need help from the software contributors and the interest to enable laser cutting to make it work well. I’d have to see if there is buy-in and interest for that to happen. I will get a laser diode for my 3d printer regardless, but would be happy to help with getting it working with the Maslow once I have my machine. Waiting for the shipment and new frame plans. I kind of want to make my own frame, but I think a new stock one with a unistrut top bar would be good to get the feel for the machine.

@mfpiechowski , If you are willing, I may want to pick your brain on the laser diode. I can go and look things up, but I enjoy the conversation and have limited time for my hobbies so when I can save time in areas it helps.

The new L-Cheapo 8W is sold here: http://3dsupplysource.com/LCHEAPO8W and is only 265US. I’m not sure I can get the parts to build one much cheaper. Although I have not researched what it would take to make one from parts anyways. Do you think there is significant value in going that route right off the bat instead of the latest L-Cheapo?

I love this. However - I have to say we need come up with a plan. The safety nut in me says it’s a very bad idea to add a accessory that Burns products on a product made of wood. I’m used to things catching fire on my laser all the time but it’s made of metal. Maybe a sheet of aluminum over the frame?

Maybe a sheet of aluminum over the frame?

I entirely agree with you. Safety will be huge. And a laser proof cutting surface would definitely have to be placed when using a laser. However, at first look, I think it’s doable.

What kind of speeds is the Maslow capable of moving the sled around at when not making a router cut?

I think that we are limited to around 1000mm/min by the motors which are designed to be pretty powerful but a little slow. You could pretty easily swap in a different set of motors to go faster.

I agree that safety is a huge issue here both for fire and for eye protection.