I’ve just gotten through a first build of the default frame which came out of the community design process and it is fantastic!

I did a full write up of the build process here. It’s rock solid, it was pretty straight forwards to put together, and overall I’m very excited about it.

There are two things that I want to change from my build. The first is that I accidentally moved the motors down 3.5 inches which was hurting performance at the top of the sheet so I moved them back up which was an easy change.

The second change is a little bit more tricky. The frame is coming it at a 20 degree angle as designed which is really too much. I think we want to be in the 10-15 degree range.

To reduce the angle we can extend the “kicker”, but to get under 15 degrees we have to extend it a lot which makes the machine take up too much space: 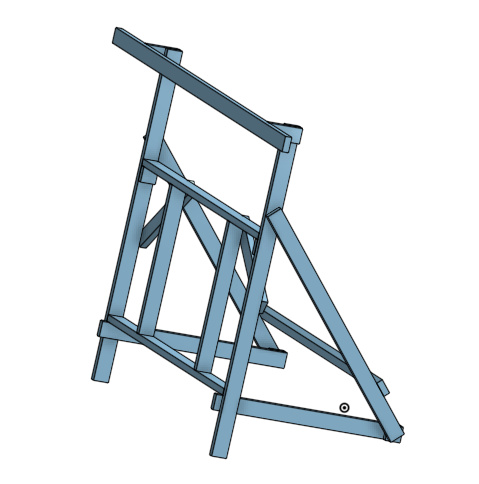 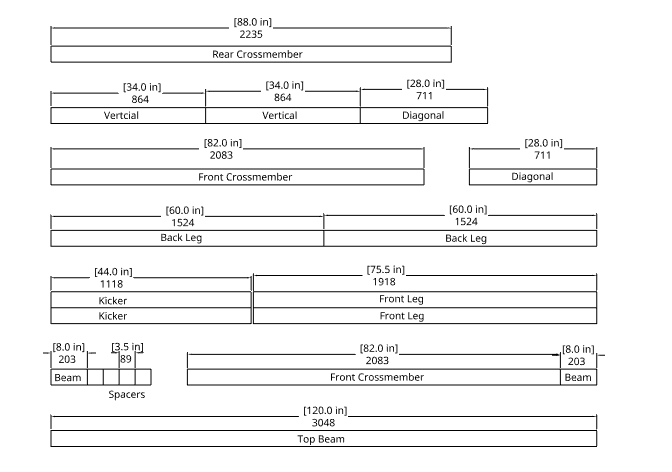 The bolt together frame solves this issue by moving the kicker up, but that’s easier when you just have to line up the bolt holes. 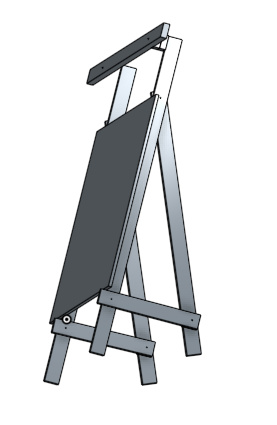 What are everyone’s thoughts on how to lower the angle without making the frame too wide?

Lift or Raise the top connecting point, shorten the lower leg. I prefer 3 points or 2 variable points in a 4 point pattern because most surfaces are not flat and 4 points tied in the same plane will wobble and need to be shimmed in these cases. By using a soft material like straps in place of the bottom leg you have some adjustment, this can put a distributed torsion on the frame. To do this you would still ned to leave stub kickers to rest work material on.

The frame is coming it at a 20 degree angle as designed which is really too much. I think we want to be in the 10-15 degree range.

20 deg off vertical? or 20 deg in relation to something else? The easy answer is to play with the height where the rear legs attach to the front legs. Nothing in the cut list needs to be altered at all.

double-check the dimensions of the legs and the kicker.

looking at the cut list, you extended the kicker from 32" to 44", that’s why it’s at too steep and angle.

why did you change that?

try redoing the legs with a 32" kicker as per the original design rather than your longer one.

also, the original instructions measured down from the top (using wood as a story stick), while your version measures up from the bottom.

looking at the cut list, you extended the kicker from 32" to 44", that’s why it’s at too steep and angle.

you also moved the kickers higher on the front legs, which distorted the geometry as well

the top of the kicker should end up 10.5" from the bottom, that changed the angle as well

but if you use the long diagonals as spacers as per the original assembly instructions, the blocks end up in the right place.

in step 6, use both spacers to position the vertical (it doesn’t matter if the verticals aren’t exactly parallel to the leg)

before step 7, you need to check that the frame is square before attaching the diagonals.

re: legs and angle

the original instructions were

make the bottom of the legs match, put a fastener through the top, pivot the leg back to match the kicker (and depending on things, make the top or bottom point of the kicker flush with the back of the leg)

this lets us put things at any angle, just by adjusting the length of the leg. It just happened that at 32" kicker fastened so that the top was 10.5" above the ground made a 15 degree angle.

a shorter kicker will attach higher up the back leg, and we can make the kicker be the appropriate length for any angle.

that’s another 3" of difference, so your motors would have been 12" above the top of the work area instead of the stock 18" a huge difference

But also, if going up only 3.5" makes things work again, then 15.5" above the work area does work

That was with the kickers 10" above the ground not 10.5. Thanks for pointing out that the kicker position and distance to the motors are related. It seems obvious now but I wasn’t seeing that.

All my tests were done with the bottom of the kicker being 10 inches above the ground which would explain why my motors are so close to the top of the sheet. I think we need space below the board for the sled to protrude off the bottom (9 inches) plus some more for the dust collection hose which isn’t that flexible. On the bolt together design I left 16 inches down there.

Is there any way we could add that kind of clearance at the bottom?

measuring from the top, use the back leg, a spacer on edge, and a flat spacer
above the kicker, that will put them at exactly the same distance from the top
on both sides.

measuring from the top, use the back leg, a spacer on edge, and a flat spacer

above the kicker, that will put them at exactly the same distance from the top

What would this be in inches or mm?

Any chance we can suggest from now on going forward we post as a group in MM or MM / inches? This would avoid any confusion by establishing a standard.

measuring from the top, use the back leg, a spacer on edge, and a flat spacer

above the kicker, that will put them at exactly the same distance from the top

What would this be in inches or mm?

Thanks! It’s way easier for me to check things like this when I know the numerical measurement