I’ve been following the development of the new default frame. Has this design been finalized? I know Bar was hoping to change the angle of the frame…did that happen? I’m hoping to build my frame before my Maslow arrives, but just want to make sure the design is finalized before I get started.

The best angle has not yet been determined.

It looks like when Bar built the Default Frame, it was at a 20 degree angle, but he mentioned he would be updating the design. Has it been updated so if I build it, the angle will be between 10-17 degrees?

Yes it has. The default frame is now ready to use with the updated angle and a couple other slight tweaks. I’ve been using it and it’s a fantastic design

Awesome. Thanks!! I just got my shipping notification, so I better get to work on the frame!

Bar modified the design and the result was a 20 degree angle, I talked with him
last week and explained how to build it with an arbitrary angle, he said he was
going to re-do the legs to a 15 degree angle.

Is it 15 degrees or 20 degrees on the angle. I have a panel saw frame I am thinking about using for my Maslow frame. Just need to install the top to hold the motors.

20 degrees is too steep, we’re going with 15 degrees, although I suspect that
with chain sag compensation, you can go to 10 or so.

20 degrees is too steep, we’re going with 15 degrees

Can we clarify which angle we are talking about here? I have my frame set up at ~13 degrees measured beneath the frame to vertical. When you say “20 degrees is too steep” I am a little confused since it seems like if I increased the angle, the slope of the frame to horizontal would decrease making it less steep. I know this is just semantics, I am just trying to get it all straight.

Here’s my crappy picture to illustrate my setup: 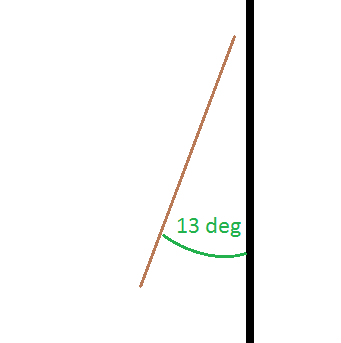 You are correct in the definition of steep and your drawing is correct. People use imprecise language informally… 20-degree is just too “not-steep” would be “more” accurate

Has anyone looked at the mathematics behind the selection of this angle? In my mind there are explicit relationships between this angle and a few performance characteristics of the machine. When plunging the router in via motion of the z-axis, the maximum plunge force the machine can impart increases as this angle increases; it also increases with increasing sled weight. This is just the component of the force of gravity perpendicular to the cutting surface. When cutting very close to the bottom corners, the limit of the chain angle is a function of friction between the sled and the work surface, which is highly dependent on this angle. The closest achievable angle relative to vertical is when the friction force exceeds the horizontal component of the chain’s force.

Based on that, the steeper the angle (lower angle from vertical in deg) the better, subject to the constraint of being able to apply enough plunge force. If you could say the plunge force will come close to, but never exceed 3 lbs (for example), given a sled weight, you could calculate the optimal angle.

friction force exceeds the horizontal component of the chain’s force

This is a great analysis. One big variable that will have to be contended with is that of the sleds and the work material being variable and with that the coefficient of friction between the sled and material will be different.

This is all not to say that this isn’t a good avenue to explore.

One big variable that will have to be contended with is that of the sleds and the work material being variable and with that the coefficient of friction between the sled and material will be different.

For me this topic has put the finger directly where it’s wanted. Thank you Friends!
Due to the only suitable router I could find, I started in the heavy weight category.
The Kickstarter pack said that I’m a beta-tester, so I opted for a wall hinged frame with a car-jack, not to be stuck on a fixed angle.
With L-Brackets on the sled I could go down to 6°, currently I’m testing 8°- 12°.
Sled weight & diameter

With stackable weights live to math comparisons gets easy and adjustable.
Kindly check the post and join in. (Self flagged as recruitment!)

Till date we had no combined community project on the same test cut with same,

Filling in a sheet with this data:

This post currently gives us a good chance to do so:

Let's make v1.09 the most stable release yet Software

We’ve had the last couple releases be not as stable as we would like and so people are still running 1.03 and 1.04. Because this next release is going to be the first one that many of our new community members use, let’s make it rock solid. To make sure 1.09 is stable we’ve got to test the heck out of it! We’re going to release an early version of it right now, and not make ANY changes unless they are absolutely critical bug fixes for issues that show up in testing. I would LOVE help testing. …

Kindly check the post and join in. (Self flagged as recruitment!)

It would help a lot to have someone test this.

So have we decided the best angle? I’m about to built my frame and will make a bespoke one cut to the exact angles not bolted and I need to know what angle I go for quickly

No, we do know that 20 degrees is far too much. We had testing a year or so ago
that seemed to show 5 degrees was too little.

The default is 15 degrees (as Bar says)