Dust Collection on the Cheap

Hello, I am new to the forums, and this is my first post.
I would first like to point out that at this time, I have not purchased my Maslow yet… I am Cash Flow Low right now… but hope to place my order in before July 2018.

That being said, I see a lot of people are purchasing dust collection systems. I was going to do the same for my shop when I decided to build one instead. I would like to share my pictures of my completed system with you as a way to say hello.

What you need is a car vacuum nozzle, a large plastic barrel, some pvc and a shop vac…

I picked up the barrel for $5.00 on Craigslist, the Car Vac Nozzle at Home Depot, the tube through the top is shop vac extension tube I had laying around cut off to about 9" and a Hot glue gun to seal it all up. 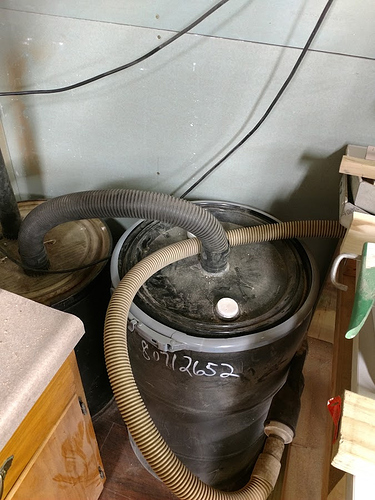 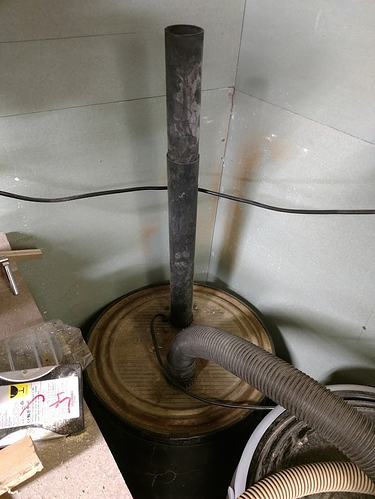 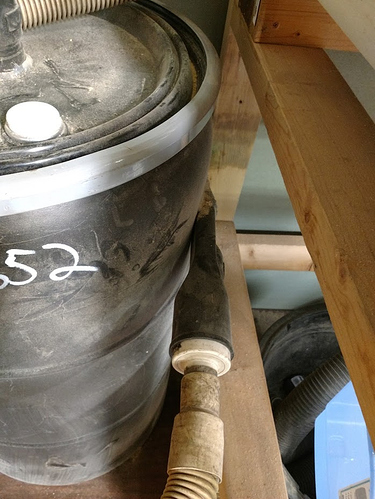 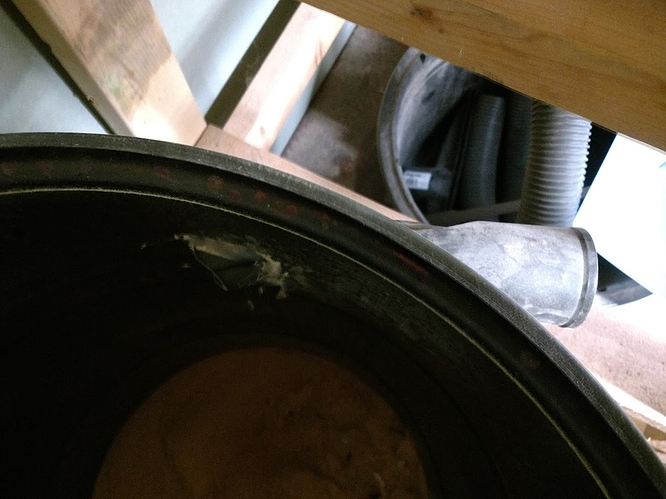 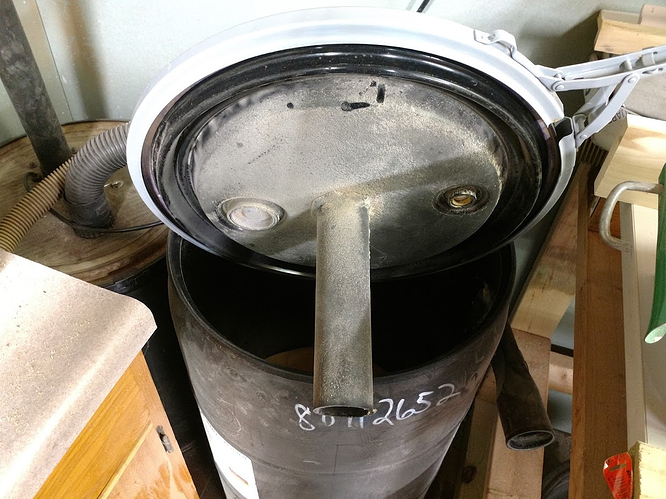 My vacuum, on the left, pulls air out of the tube in the center of the lid of my drum barrel, and the hose from my tools plug into the car vac nozzle I cut into the side of the barrel. This works like a cyclone and I get only real fine dust in my main vacuum. I still have to periodically clean my filter in my vacuum, but I have noticed stronger suction from my vacuum over a longer period of time.

I created something similar using a couple of the five gallon buckets you can get at the home improvement warehouses. the big difference is that I put an elbow on the incoming air line so it turns the flow to help promote a vortex inside the bucket. I perforated the bottom of one bucket and the lid of the other so that there were two chambers, a swirling upper one and a quiet lower one.

One friend from the workshop i use, suggested something similar, using an angled tube that ran around the inside of a plastic barrel to generate the vortex effect, but instead going into water, so that the small fine dusty particles would absorb water and gradually sink, and the larger woodier chips would end up floating.

Then we could scoop off the floating particles via a recirculating overflow filter, that would put the water back into the main container, and leaving the resulting sawdust for the mulch bin.

The finer particles we would have to remove when we would clean the filter. In theory on a monthly basis.

The main reason that we would use water, was so that the finer particles from cutting MDF, wouldn’t end up clogging up our lungs, and would be easier to dispose of.

We’re still experimenting with various ways of doing this, which is why i’m asking daft questions here.

That sounds doable, but to do that you would have to push the air through your system so everything ended up in the bucket of water. Similar to blowing bubble through a straw. Or maybe you could put an inline suction pump so the air would flow from the router, through the suction pump and then into the bucket.

Just a thought, not sure what is available on the market out there, but that would really clean up the discharge air.

Or maybe you could put an inline suction pump so the air would flow from the router, through the suction pump and then into the bucket.

That was the plan.

I’m a member of London Hackspace, https://london.hackspace.org.uk/ and we used a Pull-Push-Pull system to vent the fumes from our laser-cutter.

Pull: a a vacuum-pump to get the fumes out of the cutting chamber;
Push: an air-pump second stage to take the resulting air mass and force it through the aluminium-concertina-tube-style ducting;
Pull: a third-stage vacuum to add an extra pull to get the air-mass all the way through the ducting;

This was with an extra chimney that carried the air up, so it merged with the traffic fumes on the Hackney Road. (This is one of the busier main routes through this part of London. You can see the air turning blue from the diesel fumes during rush hour.)

It was probably way over-engineered, but that what happens when techies re-build their own toys.

The book that i’m working through at the moment is David Gingery’s “How to design and build Centrifugal Fans for the home shop” http://gingerybookstore.com/product36.html Some chewy ideas in there.

I especially like the way that he’s designed modular systems, completely made from sheet metal and pop-rivets, so they’re easy to assemble and maintain. Just hope that i’m not over-engineering again…

Just a thought, not sure what is available on the market out there, but that would really clean up the discharge air.

One of the people that i share my current workshop with, is asthmatic, so we really have to pay attention to the dust levels, hence the planned water-based systems. That this gives us more mulch for the garden is a bonus.