Finished cutting all the acrylic for my project and decided to update firmware and GC… got a error MSG saying that Firmware is 1.22 and GC is 1.21
Any Takes 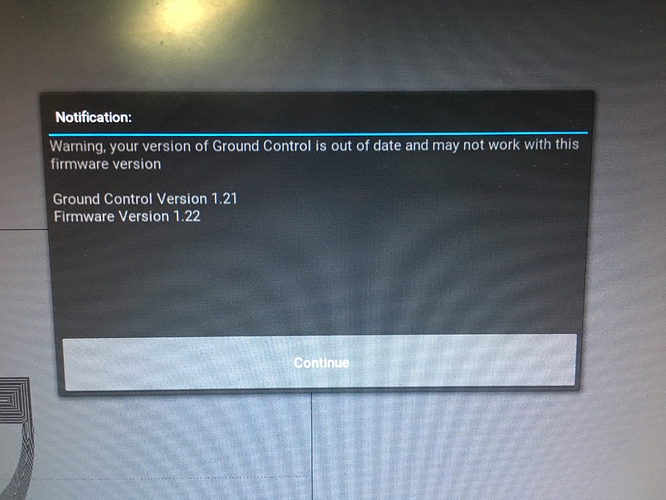 BTW, using Mac and no PC in the house.

It’s a warning, go on. You have installed a development version of the firmware or it slipped out. It’s ok.

This looks like the development version of firmware, traditionally one version number past the release. The firmware v1.21 .zip file is here.

That said, there aren’t any changes to the firmware between v1.21 and 1.22 other than the change of version number, to keep up with GC

, so you should be good to ignore the message if you like.

BTW, the macOS release usually has both the GroundControl and Firmware versions on the disc image. Available every other week here.

Bee and Blurfl the file name that I downloaded is: Maslow_Complete_9718.zip
I did Fix it
I really appreciate how much the 2 of you work for the community!
Thank you both!

It means “Technically it’s my fault” I don’t have access to the dev area where ever it lives so it means it was in the downloads at the time I downloaded and compiled the firmware and packaged it.

It has happened from time to time - Sorry for the confusion & thank you or bringing it to our attention.

Some day I will finish setting up an automated update system.

LOL
that is not a big deal.
I fix it before you even posted.
make an automated update system will be really cool!

Automatic software updates would be a fantastic upgrade. When (if) this ever gets done, please be sure to allow for the feature to be turned off (manual update). My system is not live to internet so it would cause me major headaches…

I suggest you use yymmdd (180907) as a naming convention. As you accumulate a heap-o-updates they’ll sort nicely. Works with consistent text pre or post pended too, BeeWonder180907. Since we’re post the Y2K nothingpocolyose (disclaimer, I profited a small amount in that feeding frenzy, even more in the PickPocolyose (points if you remember Dick Pick and the rap group?)), and should have replaced our Maslows by Y2.1K (cold finger prying…), adding 20 shouldn’t be necessary

Ignore any purient implications about the rap group, the Pick OS company really did have a rap group Rapping with Pick iirc) in the 90s as a marketing tool; it was neither good or successful. Googling for it gets a lot of NSFW non-related hits. Sorry

It was just barely pre mass internet (DP died around 94 and his inheritors changed directions) and the GoogleFu isn’t strong enough today to find it.

Pick kept dates as days (in decimal character strings) since I forget when. Late 90ish it gained a digit, think it was from 4 to 5. Too many Pick dictionary fields were defined with right justified sorting; whoops. A portent of the Unix 32 bit date overflow. I was an orphan system consultant for a pcb shop floor system written in Pick at the time to keep the sheep in feed.