For my first cut, I pulled a logo vector graphic into Inkscape. I read up on feed rates, scaling, and the Gcodetools extension and exported Gcode from Inkscape. The desired end-result is a cut-out wall hanging piece, but I don’t yet know how to do a tool change mid-cut for a surface “etch” and an outline cut. Once I get the tabs figured out I’ll try it again. 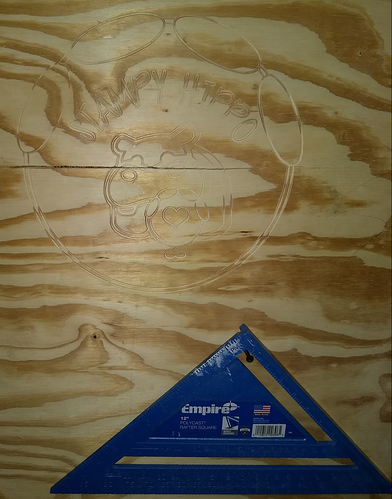 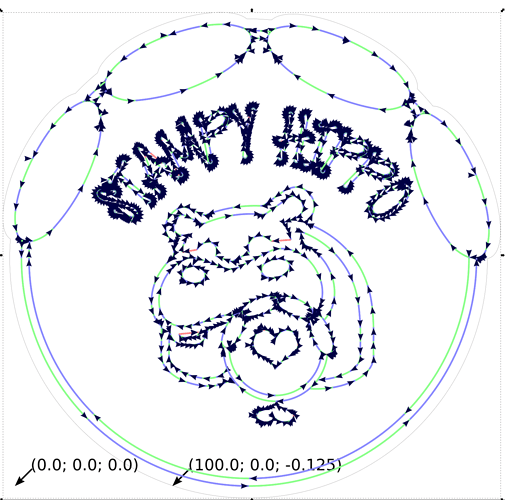 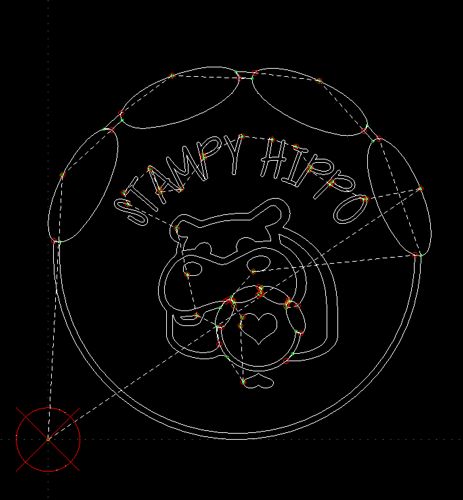 How about selecting just a part of the sign and generate the gcode? Then do the second part and you end up with two gcode files: One for each tool

That is what I have done. I’m struggling with making the tabs. I may need to do it in 3 files. 3/4 of the thickness for the outline in the second file and then the tabbed pieces as the third file. After doing that, it doesn’t appear that using Inkscape alone will have saved me any time. The best route may be to suck it up and learn FreeCAD, but the last autocad version I used was 15 and after looking at freecad, I don’t even know where to start. The good news is the machine works.

I generate my paths with https://github.com/LaserWeb/LaserWeb4

How do you have the starting and ending gcode set up in your preferences?

Let me answer the 2nd question when I’m back in the office.

The availability of gcode senders like this is one of the good reasons for
trying to make the Maslow firmware more grbl like rather than move more smarts
into the arduino.

Thanks Kurt. You use laserweb4 for cam and instead of groundcontrol? I opened it for the first time and tried to generate gcode with an svg file I’ve been working on and the file is empty. Its user interface is fairly intuitive, but I’m missing some critical parts to get it to work right.

I tried the latest stable 64 bit release (18.4.98) of Freecad and each time I select sketch workbench or any other item to start editing, it hangs. That is a non-starter for me.

“You use laserweb4 for cam and instead of groundcontrol ?”

No, sorry. That was wrong! This toolchain works only for my GRBL machines. With the Maslow I have to use GC as well.

As a follow up to this first cut with inkscape, I did get the outline finished. spraypainted it black and sanded it off. 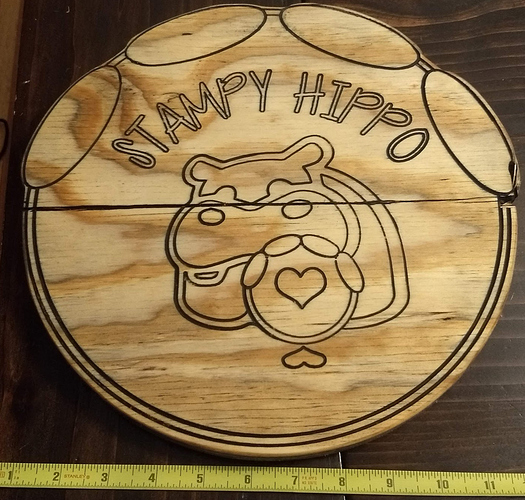 The image was cut in one gcode file with the outline from a second file The first file to the second file there was an offset in the home position and I eyeballed it and the outline cut was a little low. The laptop running groundcontrol went to sleep over on the right and “lost” its position, then the z axis when into an up-down loop then the sled plowed upward. This was a demo to help with WAF and it was approved though it looks “dirty” because I used a rougher surface cheap plywood.

I find easel from inventables is a great and easy to use software if you have an internet connection in your shop. Tabs are easy to generate and the cut options are far superior in my personal opinion to inkscape

Also I find it easier to generate designs with easel since it accepts imports from. Dxf. Svg and has an image trace feature. As well as having an easy combine shapes feature and depth per pass control and even are able to add in tool change stops throughout the code so running additional gcode files to (layer) your workpeice with multiple gcode files becomes unnecessary
DSC_0398|282x500 also I would highly recommend building the meticulous maslow sled with the higher z axis speeds or purchasing the metal maslow sled upgrade kit to save massive amounts of time on z axis movement

you can do multiple tools, depth per pass and layer in inkscape. You just have to edit the text in the orientation points. I like only using one program rather than drawing, exporting, importing, adjusting, and then going to maslow. one stop, done. But in fairness, I have not used easel or estlecam so I can’t say I know any better either.

Lol guess I’m just more comfortable with running two programs. I work in a metal fab shot with a 16 foot by 6 cnc table for 1/4 diamond plated aluminum and another 20 ft by 6 Plasma table for 1/2 steel that I run all day and that’s how our setup works for importing the gcode down from the engineers. Old habits eh?

That makes sense. we are creatures of habit. I have a 2’x3’ laser and I use a drawing program and it takes the drawing just like using a printer and does all the rest. I am new to cnc, so this is all new, or at least it was a few months ago. I’d still like to try Blender and see if that works better compared to inkscape. I think there are plenty of open source options, so I’m not yet ready to put cash down on a software piece if I have a working solution and I’d prefer it be local to my machine.