It’s not perfect and certainly not pretty. However, I have completed my first “real” project on the metal maslow. I say first real project as I have used it for test cuts and making a new sled.

Also, apparently new users are allowed one photo. You can see more of the process in the google photos album along with the machine itself.

This idea came from a pinterest finding for a laser cut stool. I believe it was called the alien stool. Very interesting and cool concept that really minimizes scrap. Should be the first image result on Google.

For the CAM software, this was my first attempt using Aspire 3.0 to generate code for the Maslow. This is the software I currently use for my other machine. For those interested, I did not encounter any problems using the suggested “Intelicam Gcode” post-processor.

Before getting into the project, I just wanted to share my settings.

On to the build…

The cutting of the project had “only” two major issues.

The first was that while traveling to the top of the board (near center), the chain jumped. Ypu can see the carnage in the album.

This proved not to be the end as I had previously marked the chain with a paintmarker while at the center location. This allowed me to drive the machine to true “home” and simply move the chain back to position. You can see in the picture above that this worked and the restarted cut matches the original perfectly. I would suggest that everyone mark the chain.

The fix for the jumping was to add bolts as idlers for the chain to improve chain engagement.

The second major issue was caused by my excitement. I did not re-enter or spend much time measuring my new sled before cutting. This resulted in very out of round parts in the x-axis (0.5 inch out of round). The stool could still be assembled but, with a lot of encouragement.

Below is the finished result with some progress pictures. Holds my 200 lbs off of the ground but, should certainly be made of thicker material. 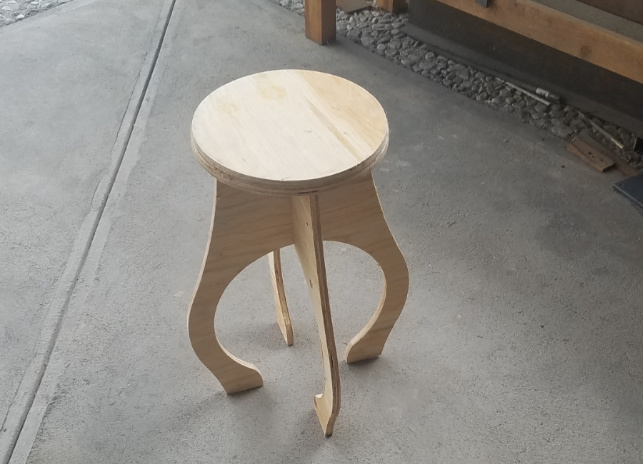 Thanks for taking the time to show us! You made my evening

That’s a very cool stool. I appreciate the build chronology in your album. (Stool and maslow). Thanks for sharing mate.

Awesome! Wish I had welding skills…or even just a welder.

A round base plate would increase strength a lot. A wooden ring 10 inches up acting as a cross brace even more. Increasing thickness of material is not going to make it as strong vs basic cross bracing