$150 really isn’t that bad. Specially for the rigidity it imparts. 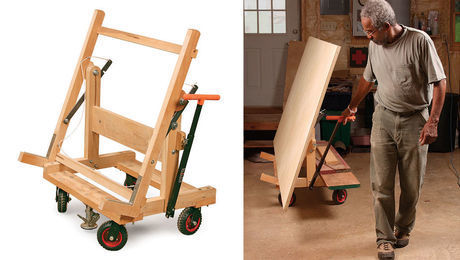 I am thinking of building something like this for my frame, to allow helping with small shop space constraints. Allowing it to tip ‘vertically’ for storage between uses, and to ‘kick out’ for use. … Just a thought.

What do you think?

I considered just hinging mine to the wall/rafters, but decided I wanted the mobility of casters (and didn’t have a good spot for a permanent mount)

can you find an orbital sander that’s <3.5" in diameter? if so, get someone to
3d print a holder that lets you replace the router with the sander, you still
have the Z axis to set tension with.

otherwise,a different sled that holds a different tool is easy enough to make.

As ‘get someone to 3d print’ presents a whole raft of problems in itself, not least that there’s probably less than half-a-dozen printers in the country, at best, I had intended on a specific sled, or did you think I would make a router sled for a machine designed purely to sand?

Again, there must be some sort of problem with my communication that you so consistently get the wrong end of my stick.

can you find an orbital sander that’s <3.5" in diameter?

Air grinder and roloc style 2 or 3" disks, 3D print an adapter so it fits into the router base, extra points if it works with the z axis motor.

Being impatient I’d want to go with a 5 or 6 inch (or metric equivalent) sander and get it done faster. Or some long larger diameter steel pipe and rig up a drum sander and just do it in one pass, but that’s somewhat OT. Make some plywood gears to drive it sll.

somewhere here there is a post from someone who made a pen holder that fit in
place of the router, complete with the notch that the Z axis grabs onto, just
like it does to the router.

Yep, but the air grinder can hold the shank on one of those mini sanding disks mentioned above and get the surface speed up to compensate for the smaller diameter compared to a 5 or 6 inch (or metric equivalent) random orbital. I’d start with scrap and very fine grit.

Might work for engine turned patterns too. Wasn’t that @aluminumwelder ?

3 inch pneumatic orbital sanders are commonly available as well. Interesting to see how the torque of a grinder would play with the newer chain attachments…

orbital motion probably wouldn’t be that bad, pure circular motion will rotate
the sled until it hits a limit, then rotates a little more until the side force
on the chain that hit the limit matches the rotational friction against the
metal.

for something line engine turning surface treatment, this could be ‘interesting’

someone needs to try this stuff.

the issue with just spinning vs orbital is that the spinning is far more likely
to dig into the material if you happen to remain in place a little too long, the
orbital will produce less damage.

by the way, can someone post a link to a good example of the 3" orbital someone
mentioned above? I don’ thave the problem Zootalaws has with only getting B-B
plywood, but I really like the idea of being able to use the maslow to sand a
large surface. g-code is simple enough that I can quickly write code to go over
whatever size/shape lumber I have.

Try a search for ‘3 inch orbital pneumatic’ for many options. None cheap, though.

The orbital sanders I’ve used are wobbly circular sanders so the force is still essentially in one direction of rotation. Wouldn’t want to keep either one in the same place very wrong, and it screams out for spindle power control

none of them have compact enough handles.

Best DIY Dremel Sander Ever: This is probably the cheapest and best Dremel sander you can make without any modification. It is really safe since its just soft plastic it is well balanced and most of all no weight at all so no unnecessary vibration.

That’s a good simple solution. Not sure a Dremel-type tool would spin a 3 inch disc, but it wouldn’t cost much to find out

At one point they sold a 2.5" sander attachment (complete with uneven weight so
that it wobbled around a bit)

Very nice design! Could you make a rough drawing with dimensions for the unistrut frame? I think I want to build mine with uni, to avoid warping and issues with 2x4’s… How many pieces at what length, including the the bottom bracing you mention wanting to add?